Government could intervene on wharf disputes ahead of Christmas

Australia’s ports face significant government intervention to end industrial action that could see goods and food imports locked up on docks ahead of Christmas if an agreement isn’t reached.

Prime Minister Scott Morrison also foreshadowed a Productivity Commission inquiry into the efficient running of Australia’s ports, warning “inefficient ports are a tax on all of us”. 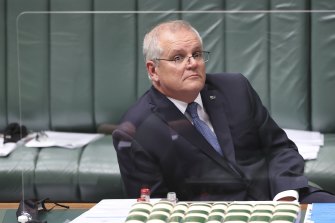 Prime Minister Scott Morrison has signalled the government is willing to intervene in ongoing industrial action at Australia’s ports.Credit:Alex Ellinghausen

Spruiking the government’s aim to boost the nation’s skills base to business lobby the Australian Industry Group on Tuesday, he also said the two-week pause on the international arrivals of skilled workers and students due to the Omicron variant could “perhaps” end sooner than expected.

The Prime Minister said the government was keeping a close watch on the industrial action at Patrick Terminals, which has been paused until at least December 10, noting it had the potential to disrupt economic activity in addition to COVID-19 related pressures globally, with global shipping costs remaining high.

“We encourage the parties to this dispute to negotiate in good faith to resolve their issues. At the same time, I can assure you that the government will take action, if needed, to protect the Australian economy from serious harm,” Mr Morrison said.

If the strikes restart in December the government would likely join Patrick to apply to the Fair Work Commission to bring an end to the dispute before Christmas.

The Maritime Union of Australia has been negotiating with Patrick, which is the largest port stevedoring firm in the country, on a new pay deal for almost a year. The process has seen repeated waves of legal industrial action that have contributed to periodic delays at its facilities. 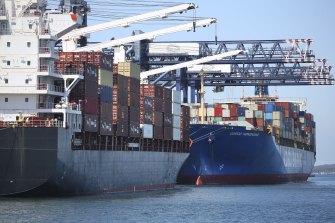 Industrial action between maritime workers and Patrick Terminals is on hold.Credit:James Alcock

Patrick has accused the union of trying to retain and build on clauses that effectively require the company to get workers’ agreement for new hires at some facilities while the union argues it is trying to maintain decent working conditions and job security for its members.

In late October Patrick asked the Fair Work Commission to tear up the enterprise agreement altogether on the basis it was unsustainable for its business. While it has committed to retaining some pay and holiday provisions on an interim basis, that would give Patrick a decisive upper hand in negotiations.

At the time, the union’s national secretary Paddy Crumlin said it was an intimidatory, bullying attack on the union.

“It is being done in such a way as to try to defame the workforce in a most disgraceful fashion by distorting public perceptions of a legally sanctioned bargaining process,” Mr Crumlin said.

“The disagreements between the two parties are easily resolved and have been achieved within the industry with other stevedoring companies without them resorting to this type of character assassination.”

In early November the Australian Competition and Consumer Commission released a major report showing that extremely restrictive deals between port operators and the union were cutting into productivity along with the union’s industrial campaign, damaging other businesses further down the supply chain.

Mr Morrison said that, in light of the report, the government was examining broader issues associated with the relative productivity of Australian ports.

“Ports are the gateway for our economy. Inefficient ports are a tax on all of us. Coalition governments … have always understood this, and have always been prepared to take action to ensure our ports can serve our economy as best as they possibly can,” he said.

However, Mr Morrison said it was clear competition, industrial relations and infrastructure constraints were among challenges to Australia’s maritime logistics, announcing Treasurer Josh Frydenberg would be shortly releasing the terms of reference for a Productivity Commission inquiry.

He said skilled migration was also part of the economic recovery, and the temporary pause in arrivals until December 15 was to allow the government to gauge the impact of Omicron.