Network Rail has released footage of the terrifying moment a father leaves his toddler to play on a train track as he stands back and watches.

In the disturbing clip, the man can be seen waiting behind the line while taking a phone call as his small child walks across and plays on the railway track, clearly oblivious to the risks.

The CCTV video of the level crossing at Chestnut Grove, in Burton Joyce, Nottinghamshire, was shared by the company which described how ‘worrying’ the footage is.

In the heartstopping incident, the little boy jumps off the path while his father briefly glances up the line to check if any trains are coming.

The video, which features a number of shocking occasions in which members of the public put themselves in danger over recent months, begins by showing a group of young people running off the pathway and onto the tracks.

Other close calls in the video include a dog walker who is taking a leisurely stroll over the crossing, with his pet, which is off the lead something Network Rail warns against. 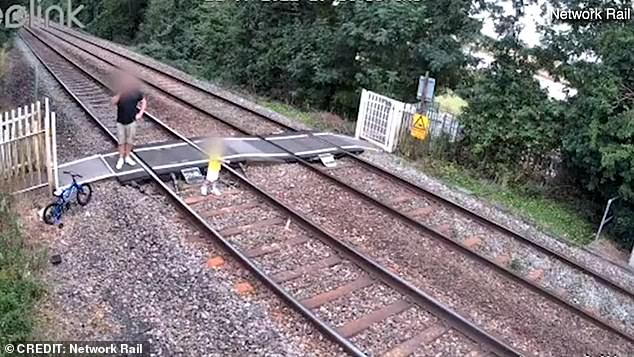 In the disturbing clip, the man can be seen waiting behind the line while taking a phone call as his small child walks across and plays on the railway track 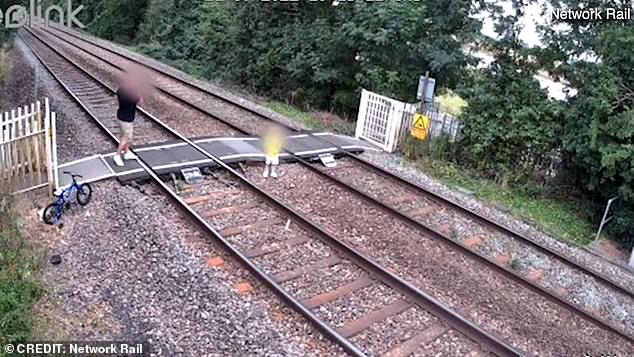 An oncoming train honks at the walker to get out the way before it can be seen hurtling towards him, missing the shocked man and his dog by seconds.

Another parent is also shown standing behind the line as their child cycles across the path.

In another instance, a man walks calmly across the busy tracks carrying a kayak.

Network Rail, which runs Britain’s rail infrastructure, has said the incidents have left it concerned for the safety of members of the public who are unaware of the dangers of busy railway lines. 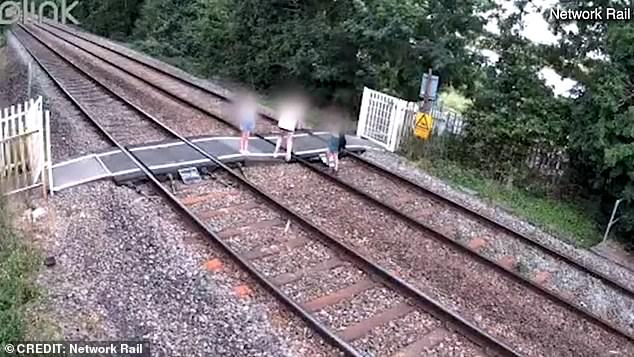 Following the incidents, the local community is being invited to a safety session this Saturday after Network Rail has seen ‘a rise in reckless behaviour’ at the popular level crossing.

Anna Ebblewhite, Level Crossing Manager for Network Rail,  said: ‘We’ve seen some incredibly worrying behaviour at Burton Joyce level crossing, which shows just how unaware some residents are of how dangerous the railway can be.’

‘That’s why we’re delivering this interactive session to help residents understand how to use the crossing safely, and ultimately improve safety amongst the community.’ 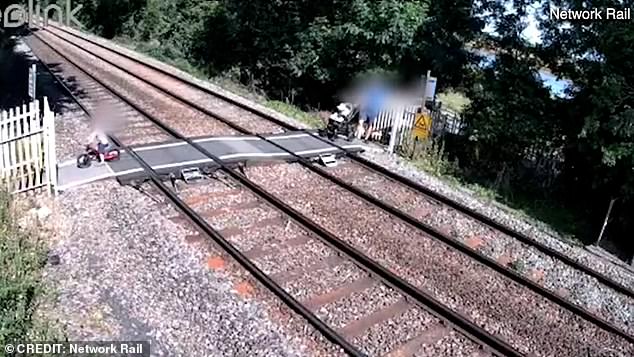 Local councillor Mike Adams described the ‘risks being taken currently by some while crossing the railway’ as ‘frightening to see’.

He urged the public to exercise caution and educate themselves on the dangers of crossing tracks, warning that otherwise they could risk losing the crossing altogether.

The busy footpath crosses the Nottingham to Lincoln line and sees around 70 trains travel through at rapid speeds every day.

In the year 2019 to 2020, six people were killed on level crossings in the UK while 17 fatalities involved people trespassing on the railway, according to Network Rail.