Home » How Victoria got hooked on gas, and why the heat’s on to find new fuel

How Victoria got hooked on gas, and why the heat’s on to find new fuel

It’s the most simple step in a recipe: boil a pot of water. And for most of us it begins the same way. Turn the knob on the stove, click the ignition switch and wait for the whoosh of a glowing blue flame.

Natural gas has burnt in Victorian homes for decades, not just for cooking but for hot water and heating too. With up to 3 million connections and 65 per cent of the nation’s total residential use, Victoria is unique in Australia for its reliance on gas as a fuel source.

But there are clouds on the horizon for what ad-men once called “stored sunshine”. Victoria’s historically plentiful supply of gas in the Bass Strait is coming to an end, while new emissions targets have raised questions about the fossil fuel’s role in a low-carbon future. 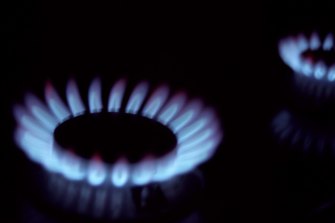 Gas supplies are dwindling, while emissions targets may force people to move to alternatives. Credit:Michelle Lowings

“If you go right back in time, essentially the Bass Strait was an incredible gas reserve,” says gas analyst Bruce Robertson. “It’s running out, the times have moved on.”

Victorians were not always so hooked on gas. “Sea gas”, as it was called, was first drilled off the Gippsland coast by Esso and BHP in 1965, prompting a major campaign to connect Victorian homes. 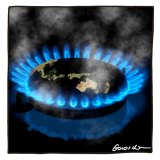 Before then, it was wood, brown coal briquettes and town gas (a byproduct of coal) that kept Melbourne and the rest of the state warm.

On a Monday morning in April, 1969, all that changed when natural gas was piped into a house in Carrum for the first time. In the following year, more than 1 million town gas appliances were converted to use natural gas. With a huge supply right on Melbourne’s doorstep, gas developed a reputation for being cheap and clean.

Just over 50 years later, it is Victoria’s dominant residential fuel source, particularly for keeping the chill out during winter. According to the Australian Bureau of Statistics, 83 per cent of Victorian households have a gas connection.

And while other states use gas, it’s nowhere near as much as Victoria. Almost half of the nation’s total residential gas consumption heats Victorian homes, according to the Grattan Institute think tank. The next highest is NSW, with 5 per cent.

“Of course Victoria had the unusual advantage of having a major city very close to a huge source of gas,” says Tony Wood, energy program director at the Grattan Institute. “It turned out to be an extraordinarily valuable resource. To some extent gas was almost a waste product. That’s why it was so cheap. And ‘natural gas’ was a great term, it didn’t hurt the growth of the industry.” 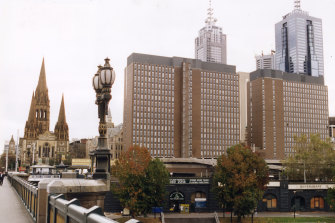 The old Gas and Fuel Corporation towers on the site of what is now Federation Square. Credit:Fairfax Media

But with the Bass Strait gas field in decline, the search is on to stop the pilot lights from going out. In March, the state government rejected on environmental grounds a proposal to build a gas import terminal at Crib Point. The energy market operator has warned of winter gas shortages as soon as 2024.

Alongside the fall in supply is the push towards net zero emissions. Last Sunday the Andrews government announced its long-awaited emissions targets, promising to reduce greenhouse gas pollution by 28 to 33 per cent of 2005 levels by 2025, and 45 to 50 per cent by 2030.

While coal and petroleum are Australia’s leading sources of emissions, about 19 per cent comes from natural gas, according to the Grattan Institute.

“There’s a very simple reason for this: gas with higher levels of carbon dioxide is more expensive to produce,” he says. “We’ve moved out of the sweet spots, we’ve got the straw in the bottom of the milkshake at the moment.”

In the release of its new emissions targets to the energy sector, the Victorian government highlighted that it was working on a “gas substitution road map” that will dictate the future of the fuel source in the state.

But finding an alternative is not going to be easy. Environmental groups and the Greens are pushing for gas to be phased out of homes, in favour of electric reverse-cycle airconditioners, heat pump electric hot water systems and induction cooktops.

The Age revealed on Wednesday that the City of Yarra had pledged to switch council buildings from gas to electricity by 2030, while also pushing for the Andrews government to ban gas connections in new homes. 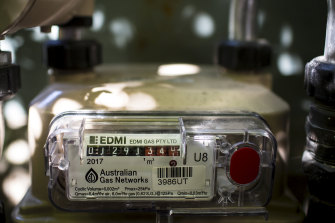 Gas bills are likely to rise in coming years.Credit:Chris Hopkins

But switching an entire state over to electric appliances is a daunting task. And even with the growth of cheaper renewables such as wind and solar, brown coal still supplies the majority of Victoria’s power. There’s also the issue of whether the grid could stand up under the load of millions of new electric heaters.

“There’s nowhere else in Australia where gas is as big a part of the energy needs as Victoria,” says Lynn Gallagher, CEO of Energy Consumers Australia. “This was always going to be harder.”

The first people to move off gas will be those on higher incomes who can afford to buy new appliances, says Ms Gallagher. That will leave lower-income people, most likely renters, to pay for the infrastructure of the gas network, she says.

“There are going to be a lot of people who are slow to change for whatever reason. They will be left to pay bigger and bigger gas bills.”

Another option being trumpeted by the gas industry is to use the existing infrastructure to supply homes with biomethane or hydrogen. However, there is a suggestion that such fuels will be more expensive than natural gas.

“Environmentalists may crow about a fully renewable state,” says Ashley Wells, Victorian director of the Australian Petroleum Production & Exploration Association. “But the truth is all the data and modelling undertaken so far indicates a large role for natural gas in reducing emissions now and increasing the uptake of renewables into the future.”

Meanwhile, the campaign to keep people using gas is in full swing, like it was in Victoria in the 1960s and ’70s. Instagram influencers were reportedly paid to sing the praises of gas-powered cooking and heating.

Ingrained behaviour may also play a role in any switch. Ask anyone who cooks in Victoria what they’re looking for in a new home and they’re likely to mention a gas stove. Induction cooking may offer the same temperature control but the sales effort will take time.

“Even though we’re thinking we should be getting out of gas, we can’t go too fast. The transition has to be achieved,” says Mr Wood from the Grattan Institute.

“I think gas has been a very valuable resource and it’s had its day.”