Iguana escapes blaze on top of a fireman's helmet

An iguana escaped a burning building by mounting a firefighter’s helmet during a blaze in Northamptonshire.

Northamptonshire Fire and Rescue Service (NFRS) was called to the home in Whitworth Avenue, Corby, when a faulty reptile heat mat in the living room caught alight.

And when they left the home the lizard decided to hitch a ride to escape the fire. 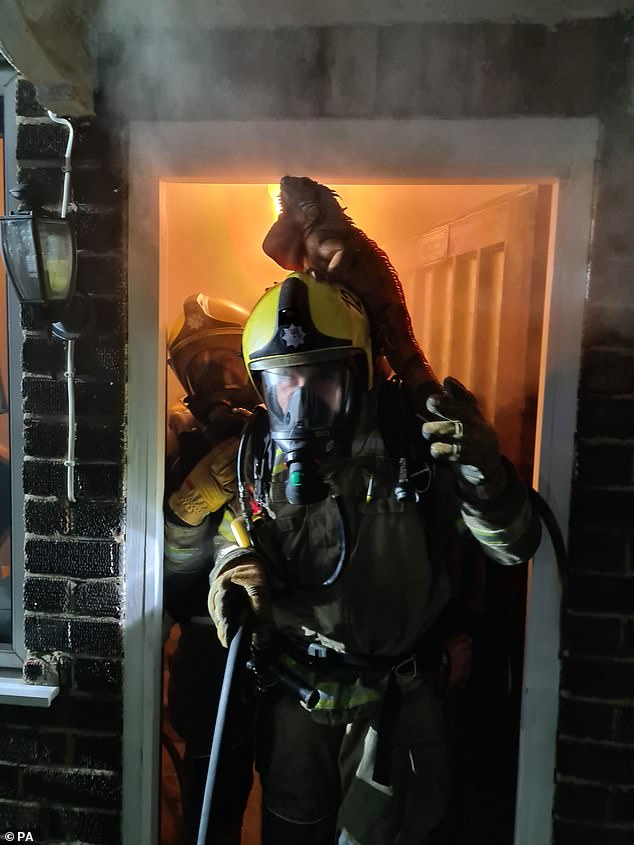 The firefighter had thought a colleague had tapped him on the head as he left the house, unaware he had a little hitchhiker

A spokesman for the service said: ‘This was a very unique incident – one that we have never dealt with before.

‘The fireman in the image didn’t realise the iguana had climbed on top of him at first as he initially thought it was a colleague touching his helmet.

‘What a surprise he then had to find this iguana chilling on his head, eager to escape the burning building.

‘Thankfully there were no injuries to any people or animals as a result of this incident and it is certainly an example of the diversity of a firefighter’s job – every day is definitely different.’

The service had earlier tweeted: ‘Fire in living room caused by reptile mat – one of occupants couldn’t wait to be rescued and jumped to safety to hitch a ride out!!’

One person replied: ‘Obviously hope that the person who was affected gets thing back in order soonest.. though.. brilliant photo.

And another added: ‘Surely that firefighter has a new nickname now?’

The iguana was not the only animal in need of help from (NFRS) as the next day a swan stuck in ice had to be freed by crews.