Wellington: Ever since he abruptly left the political scene in 2016, New Zealand’s National Party have pined for a figure to step into former prime minister John Key’s shoes.

While he was leader National was not just popular, but unified, even if many in the party have in hindsight argued it should have done more with the power it had. 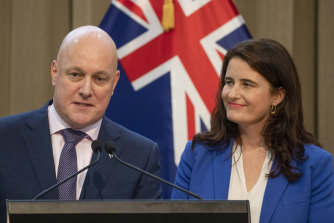 So it is natural that former Air NZ head Chris Luxon, elected on Tuesday as the new National leader, will face comparisons to him.

After all, Luxon and Key are close friends, something Luxon is happy to talk about when asked. And their backgrounds are broadly similar – they have both gone off to make their way into the world, made boatloads of money in the United States, then returned to New Zealand and slid their way into politics.

Luxon’s handpicked deputy leader Nicola Willis was a staffer for Key, meaning she knows what a functional National Party looks like – not the divided mess that it has been for the last two years.

But if Luxon is to be elected prime minister in 2023 as the party intends, he will need to step out of Key’s shadow. 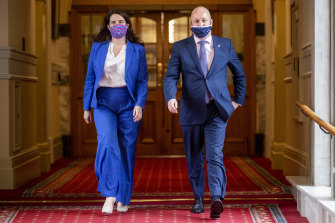 Christopher Luxon, right, and Nicola Willis after their elevation to National Party leader and deputy leader on Tuesday.Credit:NZH/AP

Key was Key – an incredibly intelligent and successful political mind who managed to come across as an average bloke unconcerned by ideology. He only secured the leadership after a long stint as shadow finance spokesman – four years after being elected MP in 2002.

Luxon was elected MP last year. He has by all accounts got the top job far sooner than he was planning, after Judith Collins destroyed her leadership with an attempt to take down her rival, former leader Simon Bridges, last week.

Key became prime minister after a third-term government led by Labour’s Helen Clark, who was respected for her skill but never seen as particularly warm or personable – qualities he exuded. 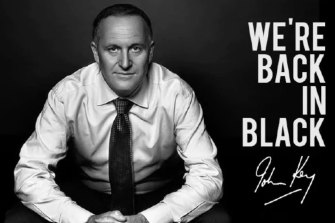 Luxon is the fifth opposition leader to take on Prime Minister Jacinda Ardern, a leader even her worst enemies admit is extremely likeable. He is engaging one-on-one but can risk slipping into TEDx mode if left to wander for too long.

And it’s unclear that a carbon copy of Key would really do so well in the New Zealand politics of 2021.

Do people want a laid-back business guy during a pandemic? Do they want to trim back the state when the state just saved them from the worst economic and health ravages of COVID-19? And with Labour taking care to maintain the “centre” in “centre left”, is there enough room for National to really distinguish itself?

It seems unlikely that just trying the same thing again will work in these new times.

Luxon seems to understand that being too closely tied to Key is a recipe for failure. In his first press conference as leader on Tuesday he explicitly said: “I am not John Key”.

None of this is to say that Luxon himself – not as John Key 2.0 but as Chris Luxon 1.0 – cannot succeed. He is unlikely to pursue the culture wars Collins did, or suddenly resign the way Todd Muller did before her. His deputy – a young urban woman – is a smart pick for a party that desperately needs to win back young urban women.

And there are plenty of aching sores in New Zealand society capable of delivering votes to his party, most prominently the skyrocketing cost of housing. National has struggled to capitalise on the issue, given it can be blamed just as much on its last term in government.

But Luxon was not in Parliament then, let alone leader of National. Key was.