Home » World News » In Taiwan’s bomb shelters, a space for life and even entertainment

In Taiwan’s bomb shelters, a space for life and even entertainment

Keelung, Taiwan: Visitors to Keelung, a mountainous port city on Taiwan’s northern coast, might reasonably think that the white wall at the back of Shi Hui-hua’s breakfast shop is, well, a wall. Only a few air vents suggest that there might be something on the other side.

“It’s a bomb shelter,” said Shi, 53, as she waited for the morning rush. “Because we’re Keelung people, we know these kinds of places.” 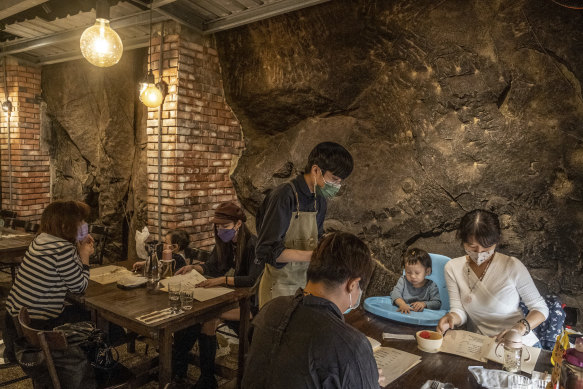 All over her street and many more in Keelung – which suffered its first foreign attack, by the Dutch, in 1642 – the landscape has been carved up for protection. Kitchens connect to underground passageways that tunnel into the sandstone. Rusty gates at the ends of alleys lead to dark maws filled with memories of war, and sometimes trash or bats – or an altar or restaurant annex.

There are nearly 700 bomb shelters in this city of 360,000 people, leading officials to declare that Keelung has a higher density of places to hide than anywhere else in heavily fortified Taiwan. And for a loosely organised band of urban planners, artists and history lovers, Keelung’s bomb shelters have become a canvas – for creative urban renewal and civil defence.

Some of these havens have been recast as cultural spaces. But these subterranean spaces are not just cool relics; on a self-governed island that China considers lost property it plans to reclaim, they are also vital infrastructure. 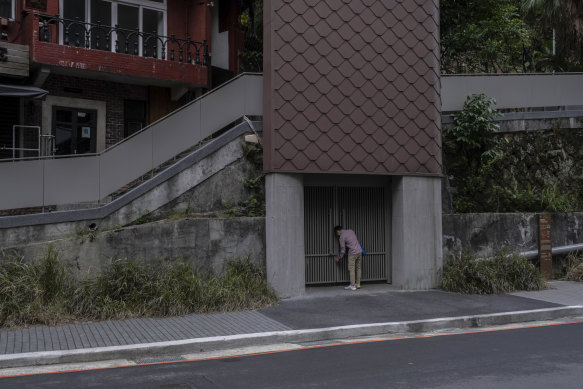 An entrance to one of the many bunkers in Keelung, Taiwan.Credit:Lam Yik Fei/The New York Times

Most of the bunkers were mapped out and built by Japan, which governed Taiwan from 1895 until the end of World War II, when Keelung was a bombing target.

The shelters around Shi’s shop occupy one of the oldest parts of the city, sitting just below a hillside park that is being upgraded with an elevator. One of its entrances will soon require a short stroll through a cave with winding tunnels that, until recently, had been used as a fire department storage shed.

On a recent morning, it looked more like an art gallery or a nightclub. Rails of lights hugged the moist walls, shining on sprouts of green plants, the underground’s only bursts of colour. Concrete floors had been laid with drainage areas on the sides.

Hung Chih-chien, 33, a public servant in the city’s urban planning division, said officials had initially thought of opening up the space and making it a restaurant, then decided they preferred not to ruin the original geology. 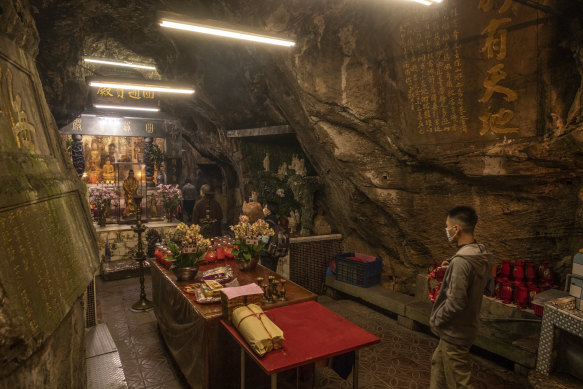 A bunker that has been converted into a temple in Keelung, Taiwan.Credit:Lam Yik Fei/The New York Times

The shelters are not easy to manage; title deeds are rare, and access often defines possession. But the city found documents showing that this bunker had been built in the 19th century, near the end of the Qing Dynasty’s rule over Taiwan. It was one of several tunnels and bunkers built in that era, when China, weakened by famine and rebellion, struggled to hold on to territory.

In 1884, for example, the French invaded Keelung, seizing the city for about a year until the imperial commissioner for Taiwan, Liu Ming-ch’uan, pushed out French troops. Soon after that, to better secure Keelung, he commissioned construction of Taiwan’s first railway tunnel through Shihciouling Mountain, a natural barrier blocking Keelung from Taipei.

The tunnel opened in 1890 – and will reopen, renovated, in a few months.

On a recent tour, Kuo Li-ya, who heads the cultural heritage department of the local government, explained the complicated restoration effort, which included running small cameras above the tunnel to gauge the strength of the ceiling. She said she hoped it would eventually be connected to hiking trails and roads.

“We want people to know the history, to know the way this helped protect Keelung,” she said. 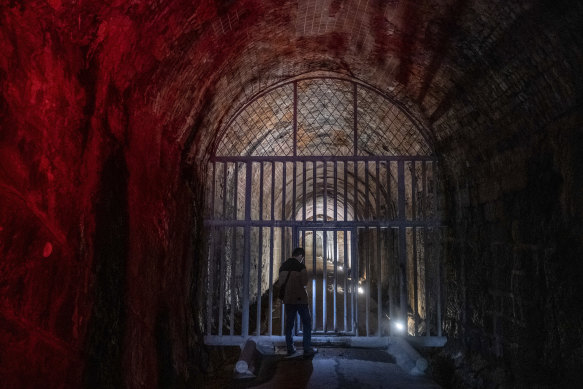 The Shihciouling Tunnel, a bunker in Keelung, Taiwan. The city is hoping the tunnel will be used for concerts and connected to hiking trails. Credit:Lam Yik Fei/The New York Times

Standing in the tunnel, with new bricks of bright orange blending with ageing stone, she spoke of history but acknowledged that the tunnel could also protect people in another conflict.

For many in Keelung, past and present threats blur.

In recent months, China has increased the frequency and intensity of military drills off Taiwan’s coast. Chinese President Xi Jinping has also become more vocal about unification with Taiwan, reserving the right to use force.

At Pufferfish, a restaurant that backs into a cavernous bomb shelter, tourists at the half-dozen wooden tables snap photographs of the interior. But locals favour dark humour.

“Many people told me if a war breaks out, they would come to my restaurant,” said Miao Hsu-ching, 34, the owner. “They’re certain that we would still provide food.”

Growing up in Keelung, Miao felt it was a pity that many abandoned bomb shelters were filled with garbage and overlooked. For generations, children here have scared one another with stories of their ghosts, soldiers killed and killing.

“It’s important to renovate them and connect them with their surrounding areas,” Miao said.

Wang Chieh, 53, a painter in Keelung, has embraced that mission. A few years ago, he and 40 or 50 local residents fixed up four mossy blast-proof walls that stand in front of bomb shelters on one of Keelung’s many hills. Inspired by the city’s rainy weather and folk beliefs, Wang sketched out a mural design with widely sprawled ferns and a mythical beast that is carved on the gate to a well-known temple in the city. 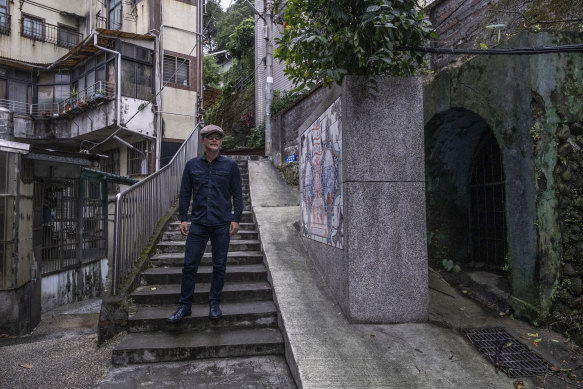 Wang Chieh near the walls outside a Keelung bunker that he decorated with a mural .Credit:Lam Yik Fei/The New York Times

It took six months to complete the paintings on white tiles. Now the blast walls and bunkers are a tourist attraction, and a landmark of pride.

“The civil society was the main driver of the renovation,” Wang said. “The younger generation was able to reflect on the past when the older generation played – or even hid – inside.”

To some, a fondness for the shelters seems strange. Shi said she saw a snake in the one behind her shop – beyond the storage room – and has no intention of going in there, even if missiles start flying.

She said these shelters should be renovated mainly to make young people – whom she called soft, a “strawberry generation” – pay more attention to the tensions with China that may force them to fight or hide.

For some of her neighbours, the bunkers are a reminder of their past. 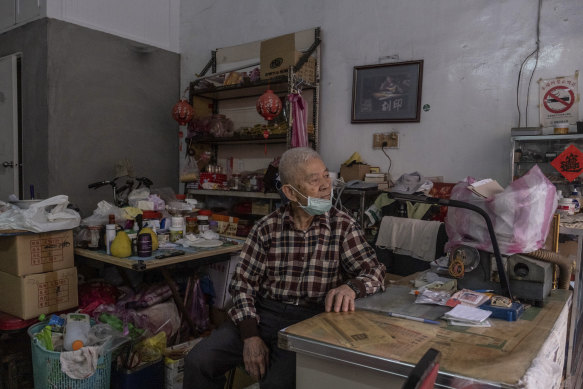 “The only safe place to be”: Wang Huo-hsiang, 91, at his shop in Keelung, remembers the American bombings in the 1940s.Credit:Lam Yik Fei/The New York Times

A few doors down from her shop, Wang Huo-hsiang, 91, sat at the store where he made rubber stamps, before he retired.

He remembers when the Americans bombed Keelung in 1944 and 1945, recalling the bump, bump, bump of the bombs he heard while hiding in a shelter nearby.

He slept in one tunnel at night, he said, lived by day in another. He was just a boy, in fifth grade, but the memory made him smile. The shelters had rescued him.

“That was the only safe place to be,” he said. “They were filled with people.”

He and his wife later spent summer nights in the man-made caves, hiding from the heat. They would share a drink and food, talk to friends.

“It was like an air-conditioner in there,” he said. His wife, Wang Chen Shu-mei, stood behind him. She laughed and agreed.

But when asked if they could imagine returning to the shelters in case of another attack, they both frowned. Wang Chen began to yell.

“We’re Taiwanese, we have nothing to do with China,” she said. Then, she spoke quietly: “We don’t know when the bombs will come. We hope they never come.”