Jacob Rees-Mogg defied Labour protests today insisting it is ‘reasonable’ for MPs to shun masks in the Commons chamber.

The Leader of the House said it was not necessary to wear a covering in the chamber because there was an ‘amazing’ amount of space – jibing that many of Opposition politicians already appear to have gone on holiday.

But Labour shot back by pointing out that Boris Johnson has been urging people to wear masks in ‘confined’ places.

The punchy exchanges came after a more than a dozen Conservatives including Mr Rees-Mogg and chief whip Mark Spencer opted to go bare-faced during the final PMQs of term yesterday.

Some also chose to sit closer together, in stark contrast to the Labour benches that universally sported masks and maintained wide gaps.

Within hours of the session, which the PM took from self-isolation at Chequers, Sir Keir Starmer had also been ‘pinged’ as one of his children tested positive.

After ‘Freedom Day’ saw almost all legal restrictions axed, Speaker Lindsay Hoyle lifted all limits on numbers in the chamber and made masks optional.

However, Sir Lindsay has appealed for politicians not to ‘push the limits for the sake of it’ and wear masks. 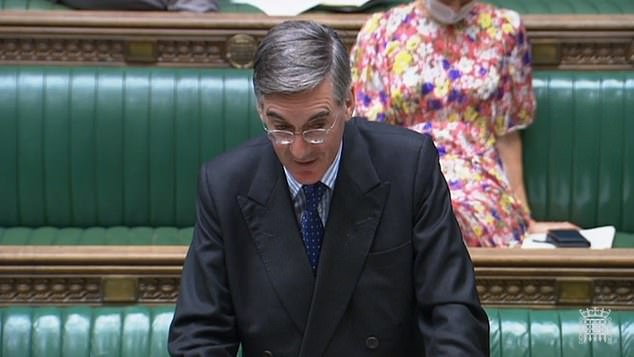 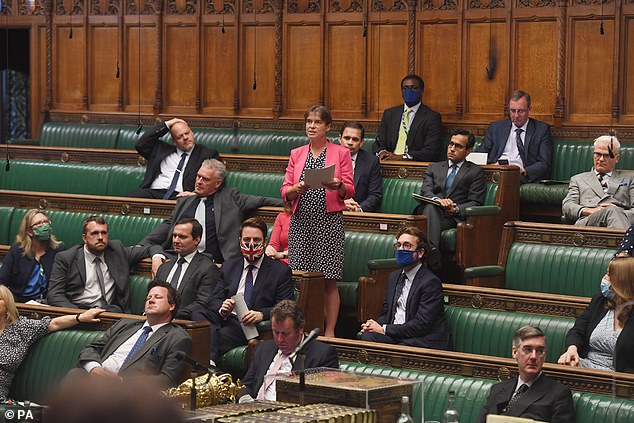 A number of Tory MPs, including Commons Leader Jacob Rees-Mogg and chief whip Mark Spencer were not wearing masks in the chamber at PMQs yesterday 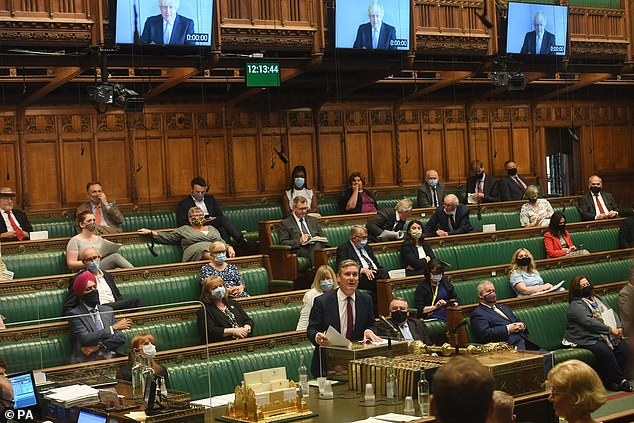 Some Tories also chose to sit closer together, in stark contrast to the Labour benches (pictured) that universally sported masks and maintained wide gaps

As shadow Commons Leader Thangam Debbonaire claimed it was ‘one rule for them and another for the rest of us’ on masks, Mr Rees-Mogg said: ‘I have one in my pocket along with a handkerchief, it’s here in case the chamber is full.

‘But it’s not and there’s a good deal of space, an amazing amount of space from some people who may have gone on recess early on the other side of the House, but even my hard-working, enthusiastic fellow Conservatives are not squeezed in and nor were we at PMQs yesterday.

‘A normal PMQs we are all sitting squeezed in with hardly an inch between us, but yesterday there was space and therefore it was a reasonable decision for individual MPs to take for themselves, in accordance with Mr Speaker’s guidance.’

Ms Debbonaire had said: ‘Clearly some people on the Government side don’t seem to know that the Government’s own encouraging rules are that we should wear masks and socially distance in enclosed spaces.

‘It’s clearly one rule for them and another for the rest of us.’

Labour’s Chi Onwurah earlier raised questions about the fact there was ‘no requirement’ on MPs to wear a mask in Parliament.

‘Can I ask the member if he will give further consideration to what requirements can be placed on members of this House to better protect those who do so much to protect us?’

Tory Sir Charles Walker, representing the ruling Commons Commission, replied: ‘We’re all gregarious, not just MPs but also House staff, and I hope when they’re not looking after us they’re out enjoying the restaurants and clubs and bars of London that are reopening.

‘Of course, our protective embrace cannot cover them there, however face coverings remain as one of the many mitigations available to the House in managing the risk of Covid.

‘The commission continues to support their use in line with national guidance, but the Speaker has no power to prevent democratically-elected members from coming onto the estate or into the chamber when the House is sitting.

‘As such, there is no meaningful way to enforce a requirement on members to wear a face covering in the chamber, but they are strongly encouraged to do so.’

Downing Street said yesterday that the PM had been ‘clear about the importance of wearing masks’ in enclosed spaces. 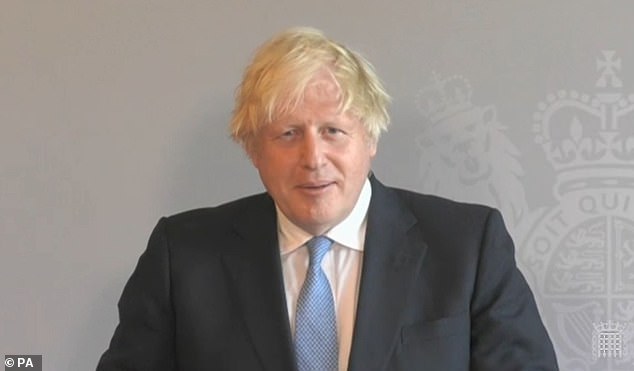 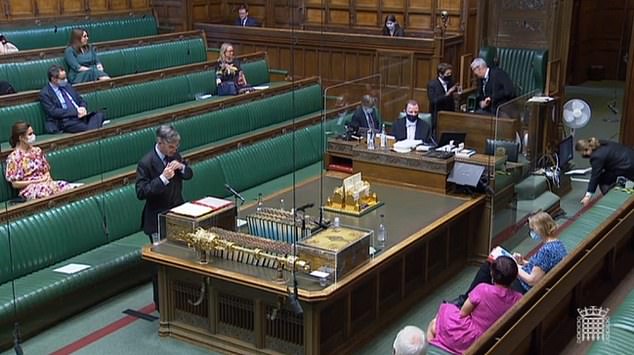 Sir Lindsay told the House earlier this week: ‘With the increasing infection levels in the community and people having to isolate, I strongly advise that everyone on the estate should wear face coverings when moving around, assessing catering venues and in the areas they consider crowded, including the chamber.

‘We have four sitting days before the House rises.

‘I really want us to behave safely, responsibly, during these few days.

‘None of us wants to risk taking Covid back to our families, staff or constituents and I’m sure we will want everyone working on the estate to feel safe and secure, and to ensure the business of this House continues.

‘I’ve got to say we’ve certainly got a large number of people that have been contacted so I’m very worried about the outcome.

‘Four days to go, I want us all to have a good break and enjoy our holidays so hopefully we will take it seriously and not push the limits for the sake of it.’