Joe Biden criticized for wearing a mask after COVID-19 vaccine

Isn’t it time to take off the mask, Joe? Both of these elderly world leaders have had their shots but why is Queen Elizabeth, 94, happy to be seen without a mask while President Biden, 78, covers his face even when he’s with other vaccinated people like Kamala

President Joe Biden is facing criticism for continuing to wear a mask at all times despite being fully vaccinated – as a smiling Queen Elizabeth stepped out without one yesterday for her first public engagement since receiving her vaccine.

Biden has continued to wear his mask for various photo opportunities since being fully vaccinated. On many occasions he is joined by Vice President Kamala Harris who is also fully vaccinated.

As recently as yesterday, the 78-year-old President wore a mask as he boarded Air Force One by himself to travel to Pennsylvania.

Meanwhile, Britain’s Queen Elizabeth stepped out without wearing a mask yesterday for her first public engagement in the UK since last October.

The Queen greeted several members of the military – and none of them were wearing masks.

The 94-year-old monarch received her COVID-19 vaccine at the same time Biden did in January. 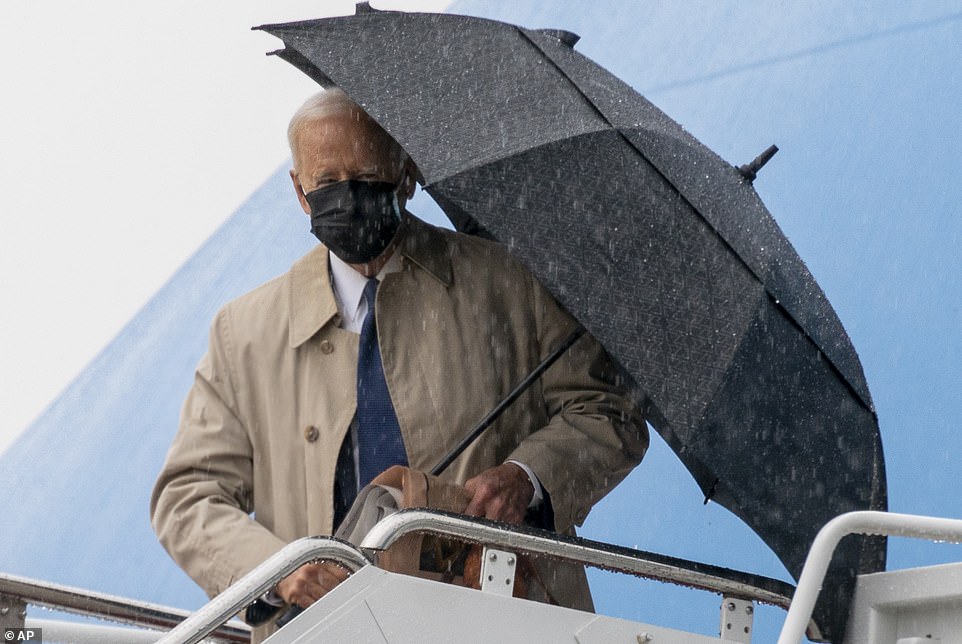 President Joe Biden is facing criticism for continuing to wear a face mask despite being fully vaccinated. He is pictured above on Wednesday leaving for Pittsburgh 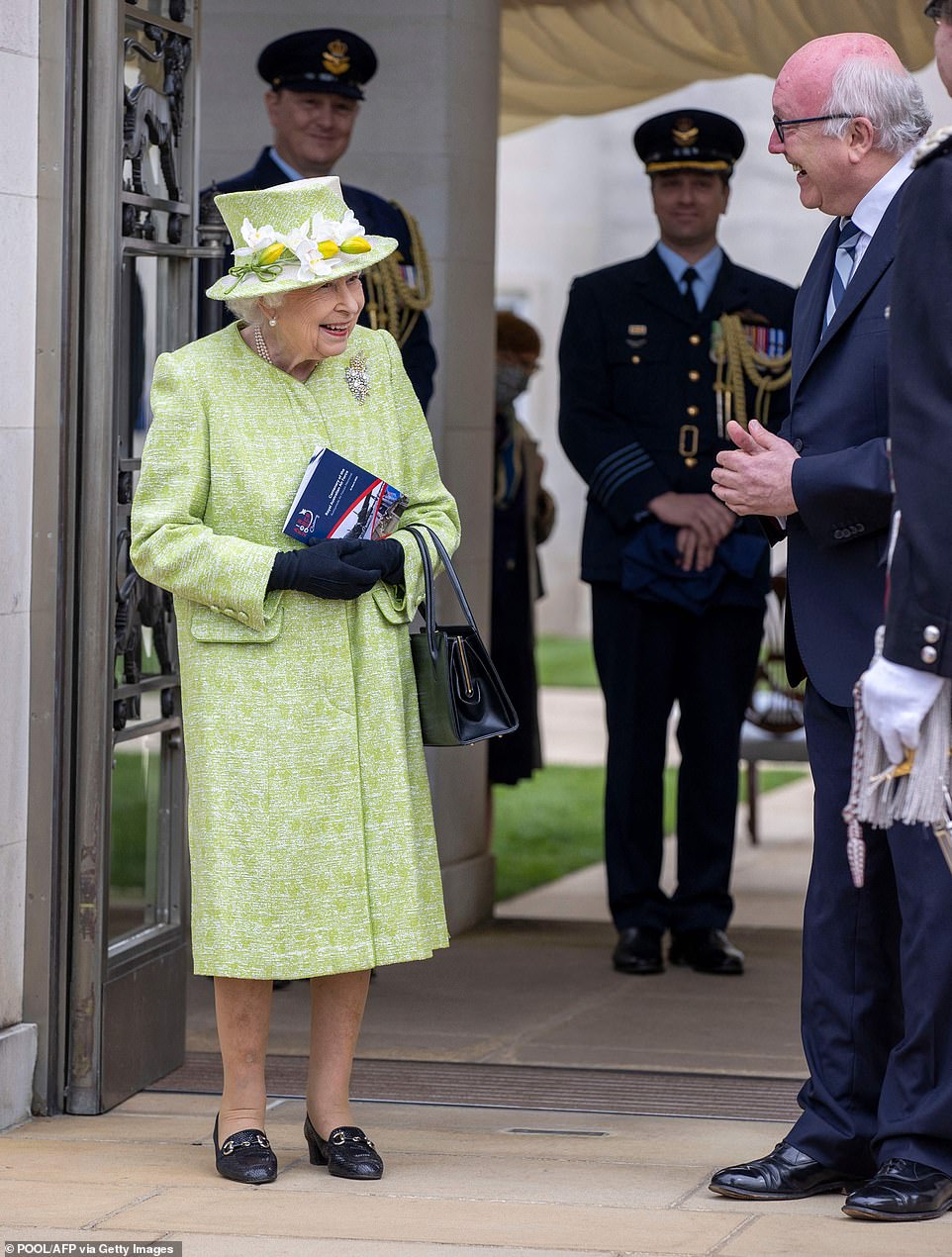 Britain’s Queen Elizabeth stepped out without wearing a mask on Wednesday for her first public engagement in the UK since last December. The 94-year-old monarch received her COVID-19 vaccine at the same time Biden did in January

The current CDC guidance on mask wearing, which was updated just last week, indicates that fully vaccinated Americans do not need to wear a mask or social distance if they are gathering with other fully vaccinated people.

It is understood that many with close proximity to Biden have already been vaccinated.

The guidance does, however, say that fully vaccinated people should continue to wear masks and stay six feet apart in public until more is known about whether those who are vaccinated can spread COVID-19.

Under an executive order signed by Biden when he first took office, masks are mandatory in federal buildings, which includes the White House. It explains why Biden continues to wear a mask while in the Oval Office and on the grounds.

The White House did not respond to questions from DailyMail.com about why Biden continues to wear a mask in certain situations given the current CDC guidance.

Experts, including Biden’s medical adviser Dr Anthony Fauci, have previously indicated that mask wearing could continue until late this year.

But given the speed of vaccine distribution in the US, which is currently just under 3 million per day, it is not clear if that will change – especially given the current CDC guidance on vaccinated people not needing to wear masks around others who have also received their shots.

The White House also did not offer a time frame for when the guidance might change given Biden’s promise this week that 90 percent of Americans will be eligible for the vaccine by mid-April. 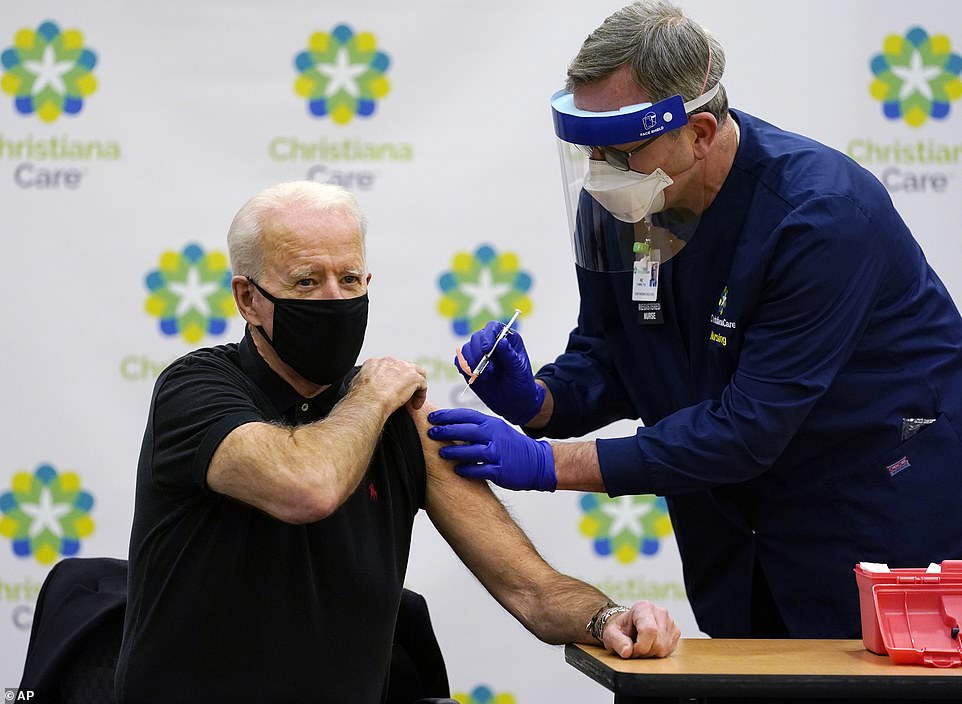 WHAT DOES THE CDC SAY ABOUT MASKS AFTER VACCINE?

This is the current guidance from the CDC about when you have been vaccinated. It was last updated March 23.

If you’ve been fully vaccinated:

To date, the US has given one or more vaccine dose to nearly 30 percent of Americans and more than 16 percent of people are fully vaccinated.

Biden’s own CDC director Dr Rochelle Walensky revealed earlier this week that people who have received the vaccine don’t appear to be able to spread COVID-19 to others.

‘Vaccinated people do not carry the virus, don’t get sick, and that is not just in the clinical trials but it’s also in real world data,’ Walensky told MSNBC’s The Rachel Maddow Show.

The data she referenced came from a CDC study released on Monday involving just under 4,000 health care workers and first responders.

Among the fully vaccinated people in the study, only three people got COVID-19. It is expected that some people will still test positive for the virus even after being vaccinated. There were 161 COVID-19 cases among those who weren’t vaccinated in the study.

Based on those results, the CDC concluded that both the Pfizer and Moderna vaccines were 90 percent effective at preventing infection – including asymptomatic cases.

Despite the promising results of the CDC study, it was revealed on Thursday morning that the Biden administration is launching a $500,000 contest to improve face masks.

Those who enter have until April 21 to submit their ideas.

Elsewhere in Walensky’s interview, she said that officials were encouraging Americans to continue wearing masks ‘for just a bit longer’. 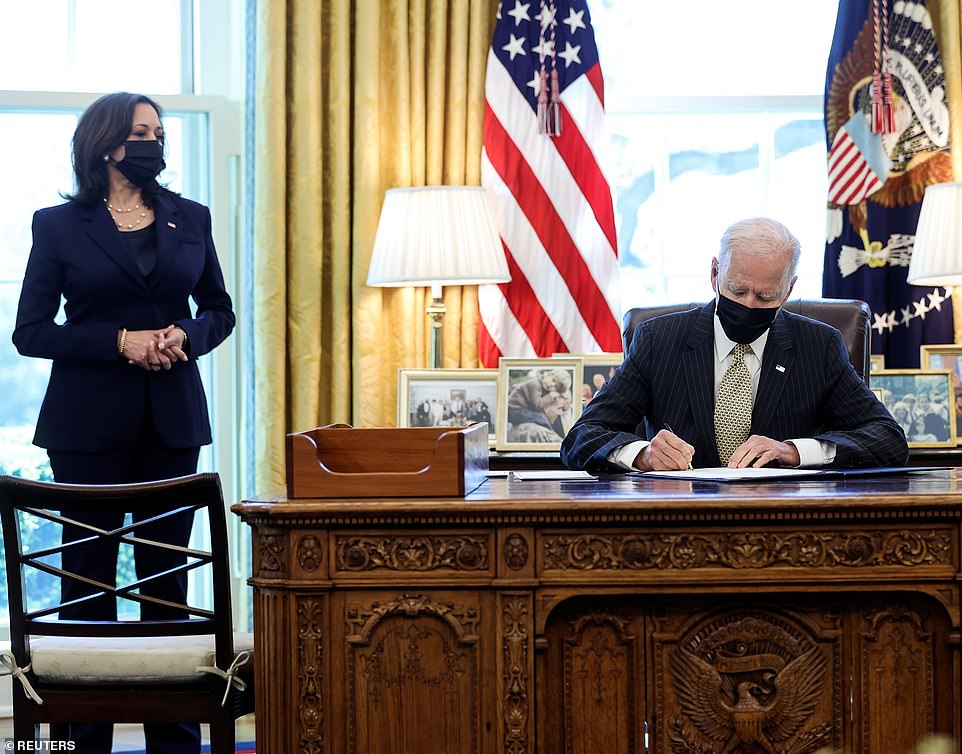 Biden has continued to wear his mask for photo opportunities in the Oval Office and White House. On many occasions he is joined by Vice President Kamala Harris who is also fully vaccinated. They are pictured above on Tuesday in the Oval Office. Under an executive order signed by Biden when he first took office, masks are mandatory in federal buildings, which includes the White House. 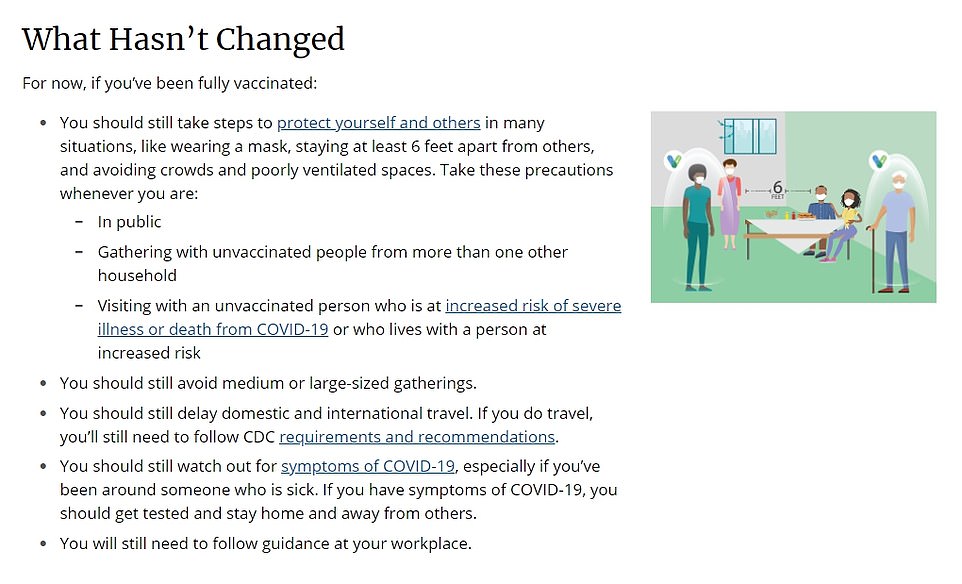 Many states – including Texas – have dropped mask mandates all together in recent weeks.

Fauci warned last month it was ‘risky business’ to end mask mandates before the majority of people were vaccinated.

Given the current CDC guidance and the latest study referenced by Dr Walensky, many Americans have started to question why Biden – and the Vice President – continue to wear masks in some settings even though they have been vaccinated.

Fox News’ Tucker Carlson dedicated a portion of his show on Wednesday night to the issue, questioning why Americans couldn’t live their lives normally once vaccinated.

‘Why are Joe Biden and Kamala Harris still wearing their obedience masks everywhere they go? They’ve been vaccinated. So has everyone around them. Why the masks? Why the restrictions? What’s going on here? We know for certain it’s not science. According to the CDC, once you’re vaccinated, you don’t need a mask anymore,’ he said.

Carlson went on to reference Dr Walensky’s comments about the recent CDC study.

‘Well, we hope vaccinated people don’t carry the virus. Otherwise, why are we getting all these vaccines? Turns out the ‘real-world data’ confirms common sense. Once you get the vaccine, you don’t need a mask. That’s a Biden employee. So, why is everyone still wearing them? Why are people with vaccinations walking alone outside with masks on? Why are Joe Biden and Kamala Harris wearing masks?’ 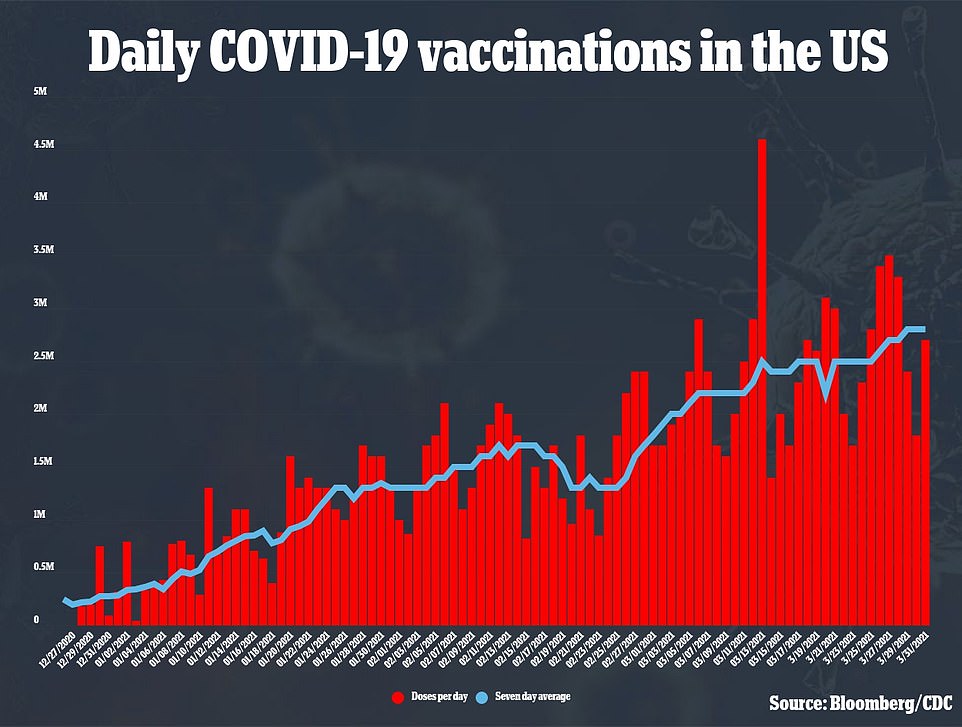 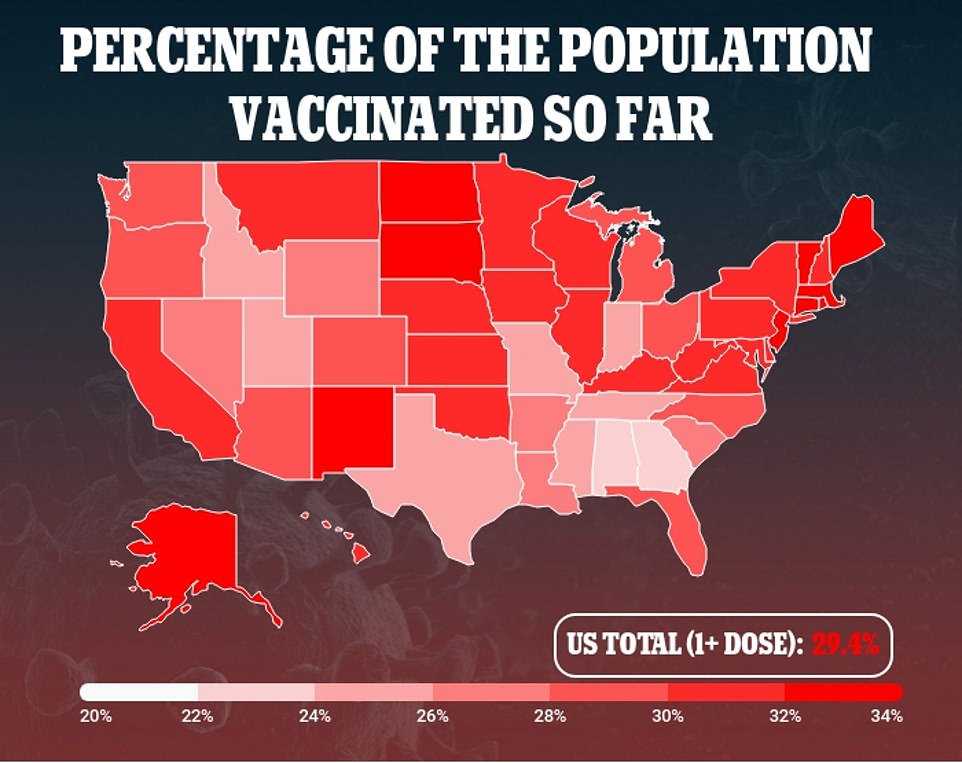 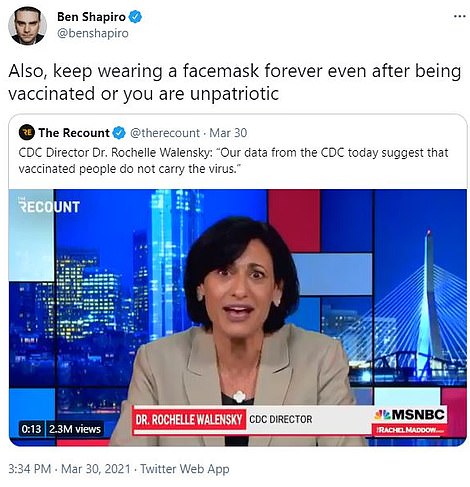 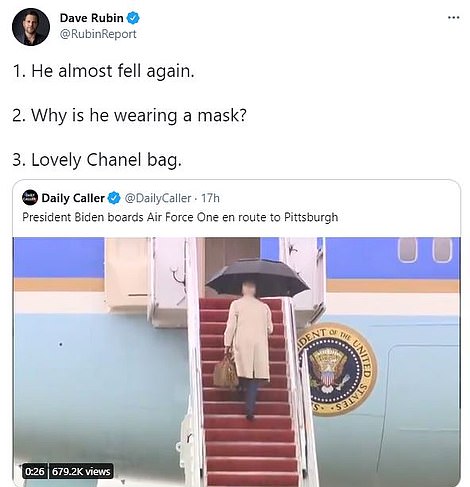 By Reuters and Natalie Rahhal US Health Editor for DailyMail.com

In fact, the shot was 100 percent effective in preventing illness among trial participants in South Africa, where a new variant called B1351 is dominant, although the number of those participants was relatively small at 800.

While the new overall efficacy rate of 91.3 percent is lower than the 95 percent originally reported in November for its 44,000-person trial, a number of variants have become more prevalent around the world since then.

However, the shot was more effective in the U.S., preventing nearly 93 percent of symptomatic infections.

Pfizer previously only had data to suggest the shot’s protection lasted nine months. The new data is the largest real-world test of the shot since its approval and doubles the duration of vaccine immunity.

It comes at a critical moment, when variants are taking hold in the U.S., and as the nation will look to Pfizer and Moderna to make up for ten of millions of doses of Johnson & Johnson’s one-shot vaccine lost to human error.

To-date, the U.S. has given one or more vaccine dose to nearly 30 percent of Americans and more than 16 percent of people are fully vaccinated. 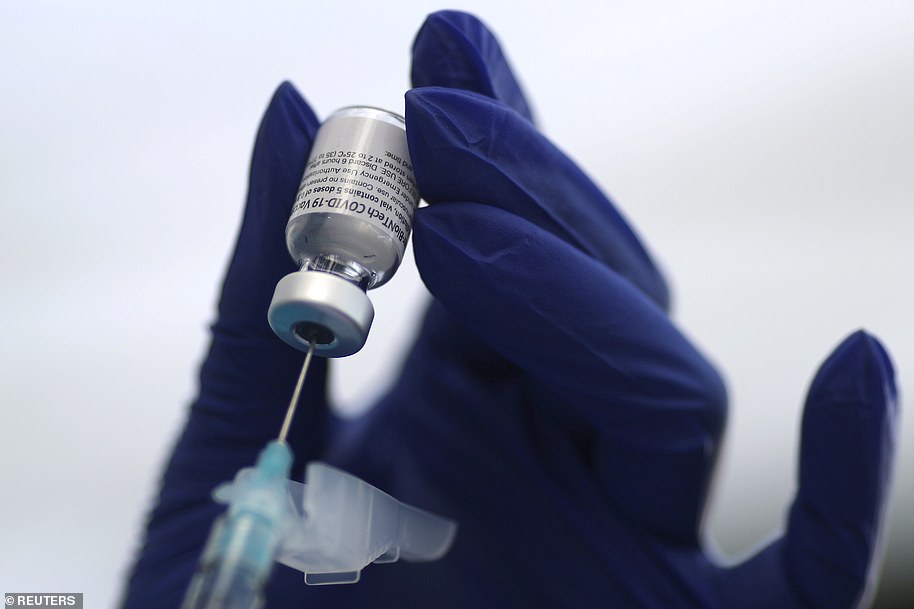 Pfizer Inc and BioNTech said on Thursday their COVID-19 vaccine is around 91% effective at preventing the disease, citing updated trial data that included participants inoculated for up to six months

The vaccine is currently authorized on an emergency basis by the U.S. Food and Drug Administration (FDA).

The trial data ‘provide the first clinical results that a vaccine can effectively protect against currently circulating variants, a critical factor to reach herd immunity and end this pandemic for the global population,’ Ugur Sahin, chief executive officer at BioNTech, said in a statement.

Experts fear new variants of COVID-19 from South Africa and Brazil may be resistant to existing vaccines and treatment.

More than 300 cases of the South African variant have been detected in more than 25 U.S. states and jurisdictions, according to federal data.

The shot’s efficacy against the South African variant as well as one the emerged in Brazil was further backed up by UK lab studies.

Pfizer and University of Birmingham researchers found that the the vaccine triggers protective antibodies against the Brazil variant.

It was 91.3 percent effective at preventing symptomatic infection, overall.

Researchers identified 927 total cases of COVID-19 among the more than 46,000 members of the original trial.

Of those, 850 cases were in people who received a placebo shot. Just 77 infections were found among the participants who got the real vaccine.

The shot’s efficacy was even higher in the U.S., where just 50 of the 697 total COVID-19 cases occurred in people who got the vaccine. The remaining cases were among participants who got the placebo shot.

Based on those results, the shot was 92.6 percent effective in the U.S.

All nine COVID-19 cases that arose among the 800 South African participants were in the placebo group.

South Africa’s variant appeared in lab tests to dull the effects of antibodies triggered by vaccines in the lab, prompting alarm worldwide that the variant would render a year of frantic shot development useless.

The variant, known as B1351, is now dominant in South Africa and has spread to many other countries – including the U.S. and UK, but is not dominant in most other regions –

In fact, AstraZeneca shot performed so poorly against the South African variant that the nation gave its allocation away.

Pfizer’s latest findings bring a sigh of relief that the vaccine will still work against the more infectious variant that emerged there.

And Americans who got vaccinated with Pfizer’s shot in December can rest assured that they still have immunity.

Pfizer had only followed a sizable share of its trial participants for three months when its vaccine was authorized by the FDA in December.

Now, at least 12,000 of those participants have been vaccinated for six months and the shot’s efficacy remains over 90 percent.

Protection likely extends well beyond that duration, too, but has yet to be proven.

That’s an encouraging sign that the incoming supply of Pfizer’s vaccine won’t need to be used as booster shots and can be used to get more people vaccinated.

The U.S. will need that supply, especially after 15 million doses of Johnson & Johnson’s vaccine were ruined by an ingredient mix-up and forced a halt on next month’s supply of the one-dose shot, the New York Times reported Wednesday.

Fortunately, Pfizer is ahead of its production schedule, and Moderna will soon be able to ship 40 percent more vaccine in each of its vials, a drastic increase to the overall supply.

There were also no serious safety concerns observed in Pfizer trial participants up to six months after the second dose, the companies said.

They added that it was generally equally effective irrespective of age, race, gender or ethnicity, and among participants with a variety of existing medical conditions.

And earlier this month, data on health care and essential workers showed their risks of contracting symptomatic COVID-19 were reduced by 80 percent after the first dose of either Pfizer or Moderna’s vaccine.

The release of Pfizer’s updated results comes on the heels of separate data that showed the vaccine is safe and effective in 12- to 15-year olds, paving the way for the drugmakers to seek U.S. and European approval to use the shot in this age group within weeks.