Kherson is told to use Russian roubles as invaders tighten grip

The occupied area of Kherson will start using the Russian rouble from Sunday as Moscow tightens its grip on the region.

An official from a pro-Russian committee which styles itself as the region’s ‘military-civil administration’ announced the move via Russian news agency RIA.

Kirill Stremousov said the transition to the rouble will take up to four months, during which time it will circulate alongside Ukraine’s official currency, the hryvnia.

This week Russia said it had gained full control of the southern region.

Russia appointed its own mayor in the city of Kherson on Tuesday after taking over regional headquarters.

But Ukrainian mayor Ihor Kolykhayev said on Facebook he had defied Russian orders. 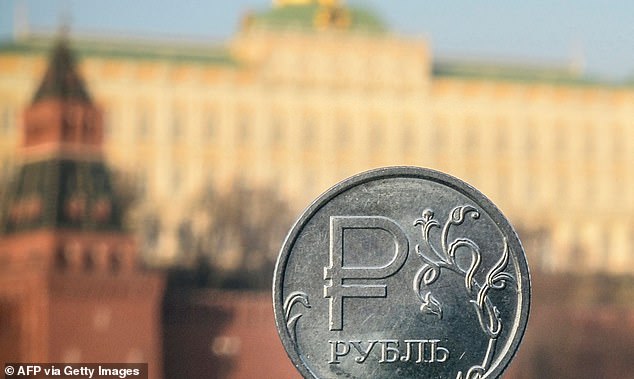 The occupied area of Kherson will start using the Russian rouble (pictured, a rouble coin in front of the Kremlin in Moscow) from Sunday, as Moscow tightens its grip on the region, a transition which may take four months and circulate with the Ukranian currency hryvnia

‘I am staying in Kherson with the people of Kherson who entrusted me with the management of our city,’ he added.

‘I refused to cooperate with the new administration.’

It was announced that the powers of ‘Kherson mayor are delegated’ pursuant to the order of the regional military commander of the Russian Federation to Oleksandr Kobets.

He will in turn report to the new head of the ‘Kherson regional administration’, Volodymyr Saldo.

Mr Kobets said that from this week he would coordinate all the processes that ensure the functioning of the city.

Mr Kolykhayev said that he had asked the Ukrainian President’s Office for detailed instructions on what the mayor and his colleagues should do in response to the current situation.

It comes as Russian forces used tear gas and stun grenades to stamp out a pro-Ukraine rally in the occupied city on Wednesday.

The protest had been organised on the day Kyiv said Russian planned to stage a referendum to create a breakaway region like those in eastern Ukraine.

Thousands of people have fled Kherson to Ukraine-controlled territory amid water outages, severe shortages of food and medicines.