Heathrow’s Covid bill hits £2.4billion after losing another £329million in first quarter of year as passen-ger numbers plummet by 91% in pandemic

Heathrow has lost more than £2.4 billion after passenger numbers through the airport plummeted by 91 per cent in the first three months of the year.

The company behind the airport revealed another £329 million loss in the first three months of 2021, as only 1.7 million passengers travelled through Heathrow, down 91 per cent compared to two years ago.

This comes as it emerged Covid passports are now not expected to be ready for the start of foreign holidays on May 17 and could be delayed until ‘later in the summer’, it was claimed today.

Grant Shapps revealed yesterday that the NHS’ app for appointments and prescriptions will double as a covid passport for tourists, providing evidence of their covid vaccinations and test results.

But Mr Shapps also gave a hint that its rollout could coincide with June’s G7 summit in Cornwall in early June, where he hopes to seal bilateral travel corridors with Canada, France, Germany, Italy, Japan and the US. 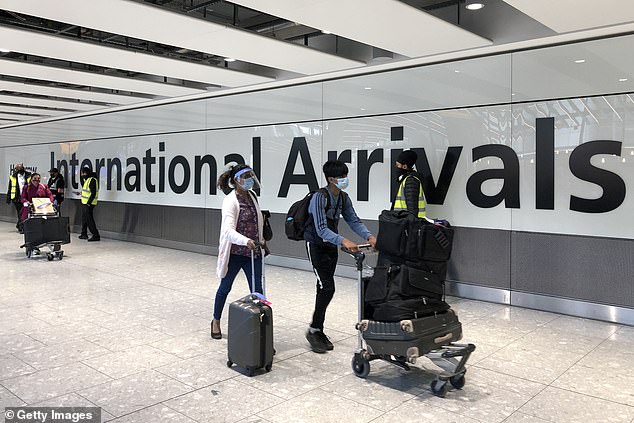 Passengers from India are escorted through the arrivals area of terminal 5 towards coaches destined for quarantine hotels, after landing at Heathrow airport on April 23

Ministers are talking optimistically about families being able to enjoy summer breaks overseas, but these will still be covered by a requirement for Covid tests.

Even travellers returning to the UK from safe countries on an official ‘green list’ will need to take tests on their return.

The consumer group Which? said the testing regime was already failing to deal with the relatively small number of people arriving in the UK from overseas, and it could be overwhelmed when large numbers of Britons come back from hotspots.

Social media and review sites have been flooded with complaints about test result delays, with a Facebook group for those suffering problems with the system amassing 1,500 members. Which? has heard from travellers who did not receive their test results for more than ten days.

Spain, which plans to open up at the end of May to tourists with digital proof of vaccination or a negative Covid test result, is said to have that the UK must reciprocate the same deal to its own tourists after Mr Shapps gave a muted response and told people to ‘wait and see’ before booking.

But the UK’s recovery over summer depends on Brits being allowed to travel abroad for holidays from May 17, Heathrow warned today.

The continued uncertainty caused by the Government’s policy on travel has forced the airport to reduce its forecasted passenger numbers to between 13 million and 36 million, down from 81 million in 2019, the year before the pandemic hit.

‘Restarting international travel from May 17 will help to kickstart the economic recovery, allowing exporters to get their goods to market, as well as reuniting families who have been separated for over a year.’

Heathrow said that as the vaccine continues to roll out and Covid-19 levels fall, restarting travel to the US and other similar markets will be ‘critical’ for the UK’s economic recovery.

The company has slashed its cash burn in half compared to the same time last year, cutting spending on new projects by 77 per cent over the period.

Mr Holland-Kaye said: ‘Heathrow is gearing up for the recovery.

‘By acting early to cut costs and protect cash, we have put ourselves in a strong financial position to weather the storm and are ready to welcome back passengers, while keeping them safe.

‘This would not be possible without the energy and commitment of my colleagues across Heathrow and I am very proud of what they have achieved.’

Britons are preparing for the ‘longest summer ever’ as lockdown-weary holidaymakers rush to go abroad as late as November to beat global Covid crackdowns.

Autumn bookings for international trips have seen an 80 per cent surge in interest compared to 2019 – as tour operators, hotels and airlines all report increased queries about later holidays.

It comes amid warnings that summer trips could be under threat if the Foreign Office advises against travel to green list countries.

The Government is preparing to lift the ban on international travel on May 17 and is finalising plans for a ‘traffic light’ system to determine which countries will be authorised destinations.

However, experts have warned of confusion because the Foreign Office is expected to publish its own advice which could differ from the colour-coded scheme.