Fears were raised today that Belarus could join the conflict in Ukraine after President Alexander Lukashenko announced he will deploy a ‘joint military task force’ with Russia on the embattled country’s western border.

The dictator said this was in response to what he said was a clear threat to Belarus from Kyiv and its backers in the West, claiming without evidence that plans were being drawn up in Ukraine to attack his country.

Lukashenko’s announcement sparked fury in Europe, with the European Commission urging Belarus to refrain from any involvement in Russia’s ‘brutal illegitimate undertaking’ that violated the United Nations Charter and international law.

Specifically, it told Minsk immediately to stop allowing the territory of Belarus to serve as a launch pad for very recent missile strikes and drone attacks against Ukrainian civilians. 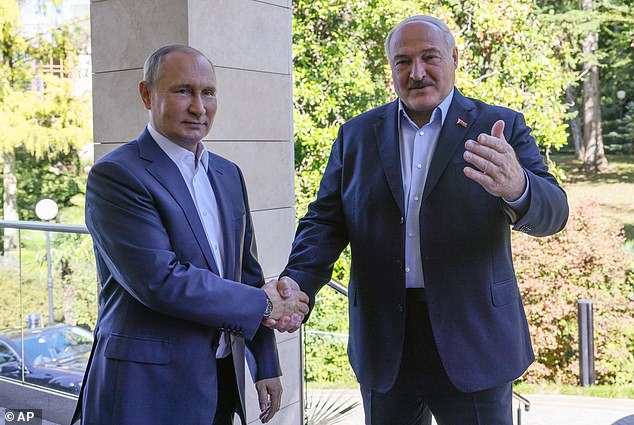 The remarks from Lukashenko, who has held power in Belarus since 1994, indicate a potential further escalation of the war in Ukraine, possibly with a combined Russian-Belarus joint force in the north of Ukraine.

‘Strikes on the territory of Belarus are not just being discussed in Ukraine today, but are also being planned,’ Lukashenko said at a meeting on security, without providing evidence for the assertion.

‘Their owners are pushing them to start a war against Belarus to drag us there.’

‘We have been preparing for this for decades. If necessary, we will respond,’ Lukashenko said, adding that he had spoken to Putin about the situation while at a meeting in St Petersburg.

Lukashenko said he had agreed with Putin to deploy a regional military group, and had started pulling forces together two days ago, apparently after an attack on Russia’s road and rail bridge to Crimea early on Saturday.

He said that a warning was delivered to Belarus through unofficial channels that Ukraine planned ‘Crimean Bridge 2’, though he did not give details.

‘My answer was simple: “Tell the president of Ukraine and the other lunatics: if they touch one metre of our territory then the Crimean Bridge will seem to them like a walk in the park”.’ 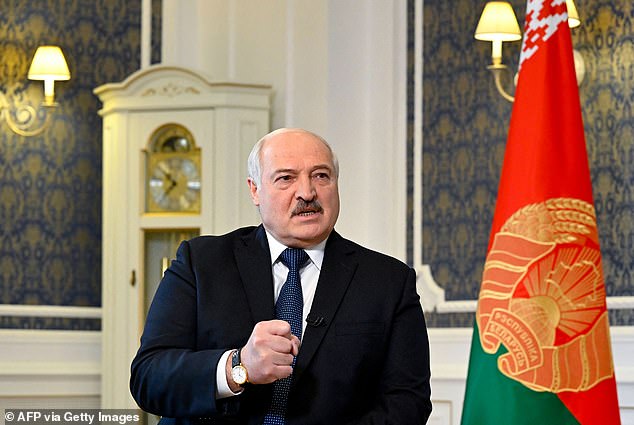 Lukashenko (pictured speaking in July) said he had agreed with Putin to deploy a regional military group, and had started pulling forces together two days ago, apparently after an attack on Russia’s road and rail bridge to Crimea early on Saturday 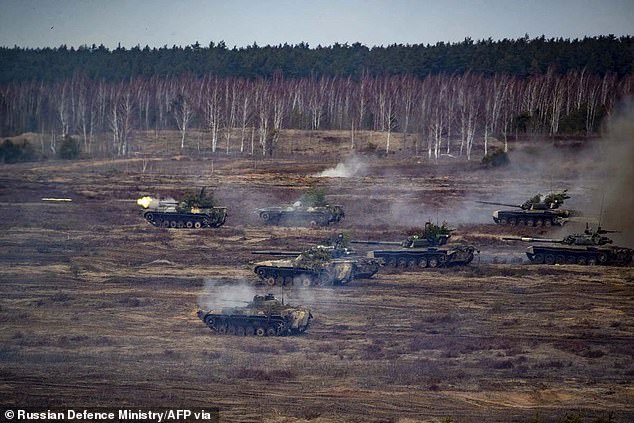 Pictured: Russian and Belarus tanks during joint exercises of the armed forces on February 24, days before Putin ordered his forces to invade Ukraine on February 24 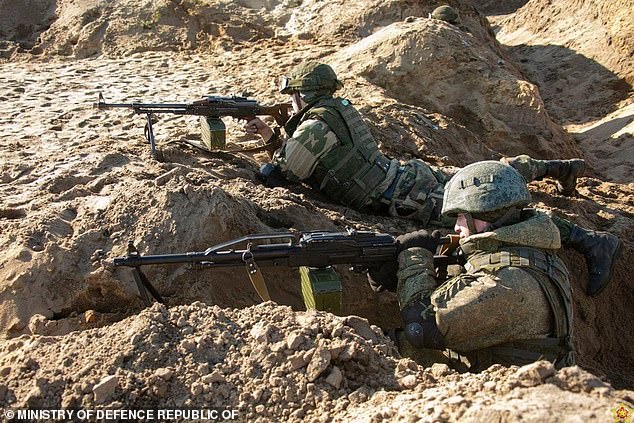 Russian (right) and Belarus soldiers during joint exercises of the armed forces, February 19

On Sunday, the head of Belarus’s border guards accused Ukraine of provocations at the border.

Russian forces used Belarus as a staging post for their Feb. 24 invasion of Ukraine, sending troops and equipment into northern Ukraine from bases in Belarus.

Peter Stano, a spokesperson for the European Union’s executive arm, urged Belarus to refrain from getting involved in the on-going war.

‘Any further actions and in particular the Belarusian military’s direct involvement into this war, against the will of the vast majority of the Belarusian people, will be met by new and strong restrictive measures,’ Stano said.

The news came days after the Norwegian Nobel Committee awarded the Nobel Peace Prize to human rights organisations in Ukraine and Russia, and to an activist jailed in Russia’s ally Belarus – angering Minsk.

It also came as Russian president Vladimir Putin blitzed Ukraine with missile strikes this morning, hitting the capital Kyiv and killing civilians as revenge for an explosion which crippled the Crimea Bridge on Saturday.

At least eight people were killed and 24 were injured in just one of the Kyiv strikes, while police said 10 were killed across the country. The number is expected to rise.

Ukraine’s military said 83 rockets were fired at Ukraine – half of which were shot down while the other half of which slammed into cities across the country. 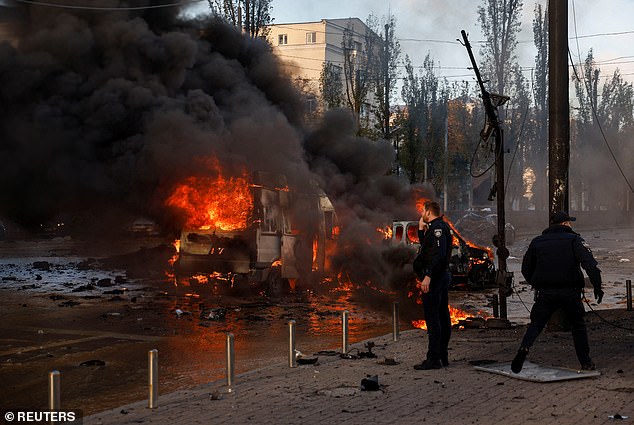 KYIV: Cars burn on the streets of the Ukrainian capital this morning after multiple missiles struck the city – the first time in months that it has been hit, and as Putin plots his revenge for strikes on the Kerch Bridge 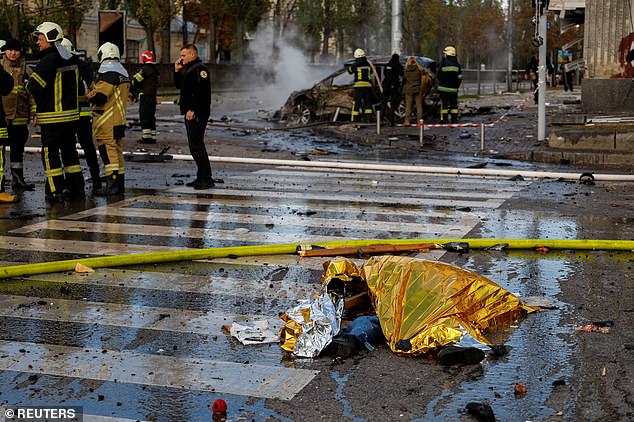 KYIV: A dead body lies in the streets after Russian missiles hit the Ukrainian capital for the first time in months, torching cars and blowing up a park in a residential area 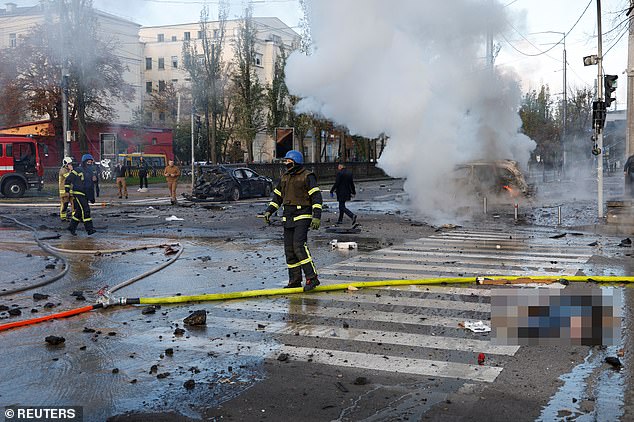 The European Commission condemned Russian missile strikes on Kyiv and other Ukrainian cities on Monday as ‘barbaric’.

EU foreign policy chief Josep Borrell said Russia’s acts had ‘no place in the 21st century’, adding that military support for Ukraine from the bloc was on its way.

Russia pounded cities across Ukraine during rush hour in apparent revenge strikes after Putin declared a blast on Russia’s bridge to Crimea to be a terrorist attack.

‘They are barbaric and cowardly attacks… targeting innocent civilians on their way to work and school in the morning traffic,’ Peter Stano, a spokesperson for the European Union’s executive arm told the Commission’s daily news briefing.

He described the strikes as a contravention of international humanitarian law and said Russia’s political and military leadership would be held accountable for these and other war crimes.

The missiles tore into busy intersections, parks and tourist sites in the centre of downtown Kyiv with an intensity not seen even when Russian forces attempted to capture the capital early in the war.

Explosions were also reported in several other cities including Lviv, Ternopil and Zhytomyr in western Ukraine, Dnipro and Kremenchuk in central Ukraine, Zaporizhzhia in the south and Kharkiv in the east.

In a televised address, Putin said he had ordered ‘massive’ long-range strikes against Ukrainian energy, command and communication targets, using missiles fired from air, sea and land, in response to what he described as terrorist attacks, including Saturday’s explosion at the Kerch Strait bridge.

‘The Kyiv regime, with its actions, has put itself on the same level as international terrorist organisations. With the most odious groups. To leave such acts without a response is simply impossible,’ Putin said. 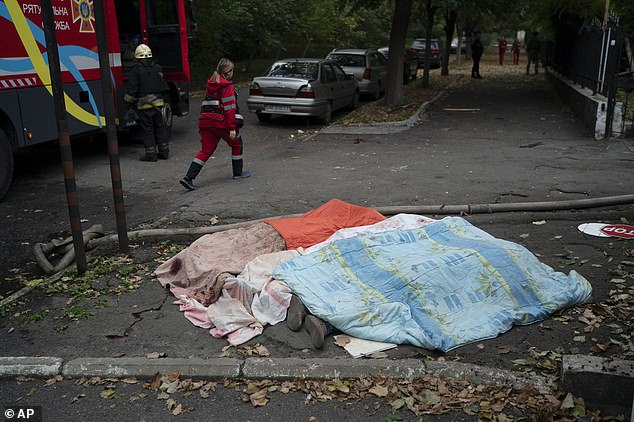 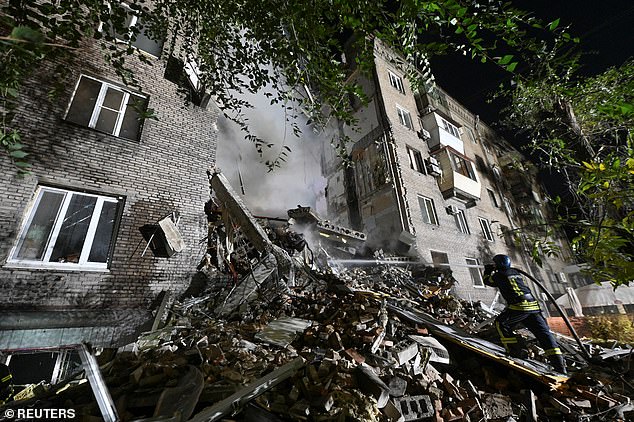 ZAPORIZHZHIA: Rescuers attempt to extinguish the remains of an apartment building in southern Ukraine which was hit by a Russian missile overnight 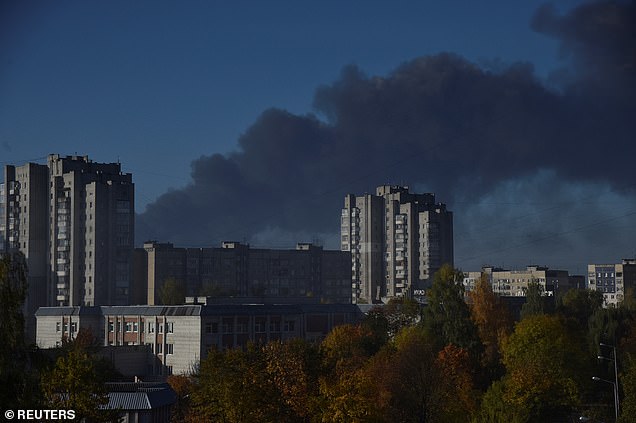 LVIV: Smoke rises over the city in far-western Ukraine that has been largely spared the worst effects of the war after Putin unleashed a barrage of strikes in revenge for the Crimea bridge being hit 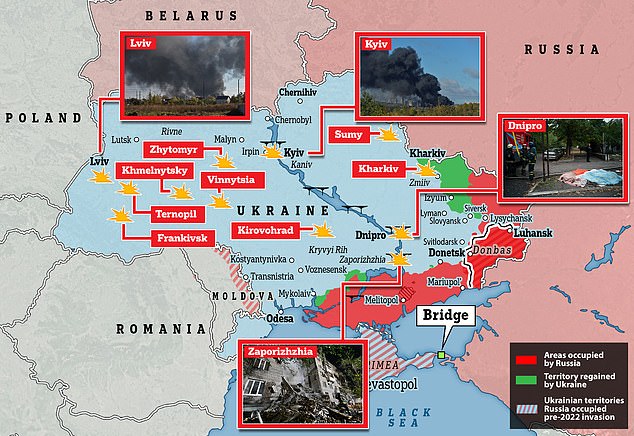 83 Russian missiles were launched at Ukraine this morning in combination with Iranian drones, striking power stations, water supplies and civilians across the country – killing eight and wounding 24 in Kyiv alone

The Kremlin was humiliated on Saturday when an explosion damaged the only bridge over the Kerch Strait linking Ukraine’s Crimea peninsula, annexed by Moscow in 2014, to Russia proper. Ukraine has not claimed responsibility for the blast on the bridge but has celebrated it.

In Kyiv, the body of a man in jeans lay in a street at a major intersection, surrounded by flaming cars. In a park, a soldier cut through the clothes of a woman who lay in the grass to try to treat her wounds. Two other women were bleeding nearby.

A huge crater gaped next to a children’s playground in a central Kyiv park. The remains of an apparent missile were buried, smoking in the mud.

More volleys of missiles struck the capital again later in the morning. Pedestrians huddled for shelter at the entrance of Metro stations and inside parking garages.

Germany said a building housing its consulate in Kyiv had been hit in Monday’s strike, though it had not been used since the war started on Feb. 24.

By mid-morning, Ukraine’s defence ministry said Russia had fired 83 cruise missiles, and Ukraine’s air defences had shot down 43 of them. Police said at least five people had been killed and 12 wounded in Kyiv.

Security camera footage showed shrapnel and flames engulfing a glass-bottomed footbridge across a wooded valley in the city centre, one of Kyiv’s most popular tourist sites. One pedestrian ran away from the blast. Reuters later saw a huge crater beneath the bridge, which was damaged but remained standing.

‘They are trying to destroy us and wipe us off the face of the earth,’ Zelensky said on the Telegram messaging app. ‘The air raid sirens do not subside throughout Ukraine.’

Zelensky later filmed a video message on a mobile phone on an empty central Kyiv street. He said the strikes had two main targets: energy infrastructure and people.

‘Such a time and such targets were specially chosen to cause as much damage as possible,’ he said.

Prime Minister Denys Shmygal promised to restore utilities as quickly as possible. Officials reported that power was down in Ukraine’s second largest city Kharkiv and nearby Poltava.

Foreign Minister Dmytro Kuleba tweeted: ‘Putin’s only tactic is terror on peaceful Ukrainian cities, but he will not break Ukraine down. This is also his response to all appeasers who want to talk with him about peace: Putin is a terrorist who talks with missiles.’ 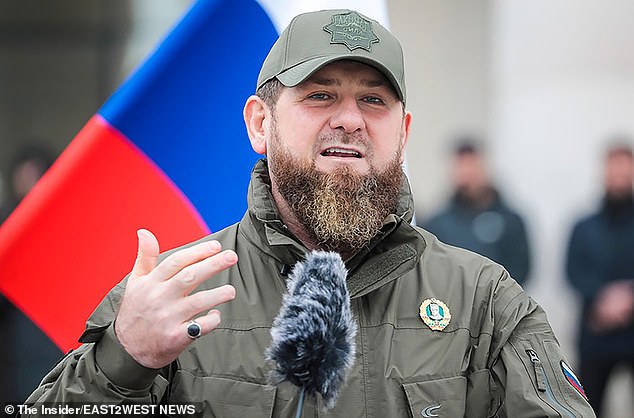 Commentators on Russian television have increasingly been calling for massive retaliation against Ukraine, with the military leadership facing public criticism for the first time as Russian forces have been beaten back on the battlefield.

Ramzan Kadyrov, the staunchly pro-Kremlin leader of Russia’s Chechnya region who had demanded in recent days that military commanders be sacked, hailed Monday’s attacks: ‘Now I am 100% satisfied with how the special military operation is being conducted.

‘We warned you Zelensky, that Russia hasn’t even got started yet, so stop complaining … and run! Run away without looking back to the West,’ he wrote.

The Kerch Bridge, which Putin personally opened, is a major supply route for Russian forces in southern Ukraine and a symbol of Russia’s control of Crimea.

Russia has faced major setbacks on the battlefield since the start of September, with Ukrainian forces bursting through front lines and recapturing territory.

Putin responded to the losses by ordering a mobilisation of hundreds of thousands of reservists, proclaiming the annexation of occupied territory and threatening repeatedly to use nuclear weapons.