A dry run before the main event! Thirsty Mailman walks for SEVEN MILES in search for a cool pint at the Qatar World Cup

Qatar is a proud Islamic country and alcohol is banned almost everywhere.

But World Cup organisers Fifa have always promised eager fans that they would be able to buy a pint.

Yesterday, after mass confusion caused by a last-minute about-turn involving Budweiser, I tested the claim – and it took three hours and seven miles of walking.

In the 12 years since the hardline Islamic regime was controversially awarded the tournament, Qatar’s sheikhs have apparently assured Fifa it would honour its all-important sponsorships – including Budweiser being named the ‘official beer of the World Cup’. 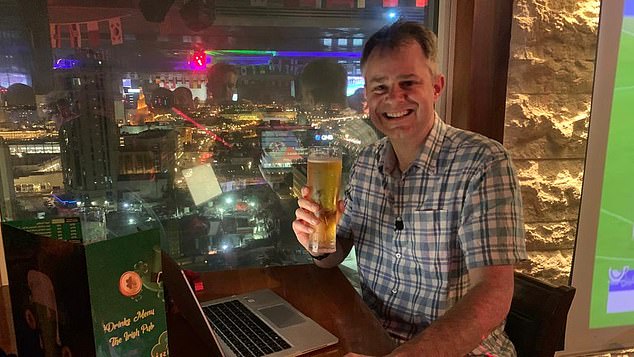 Pictured: Sam finally gets a pint at the Best Western Hotel after being unsuccessful in fan zones

Qatar, the first Muslim country to be granted custodian of the World Cup tournament, has grudgingly allowed booze to be sold in dedicated ‘fan zones’.

Until yesterday, Budweiser thought its £63 million deal allowed it to ply its trade in the eight World Cup stadiums as well.

But wandering the streets of the gleaming capital Doha yesterday, I discovered just how hollow the promises are and how difficult it will be for football fans to enjoy a drink while supporting their teams.

The traditional Souk Waqif in central Doha is a stunning hub for fans and families alike, and last night there was a buzzing atmosphere as mums, dads and children mingled with excited and exuberant fans from across the world, including Argentina, Tunisia, England and Portugal. 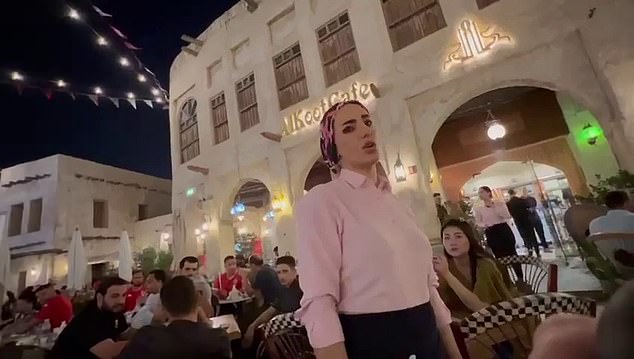 Pictured: An official who earlier yesterday told Sam at the fan zone that the Budweiser facility was closed until the next day at 7pm so he could not get a drink

But despite the festival atmosphere, absolutely nowhere offered a glass of beer or a glass of wine – understandable in a strict Islamic nation. So in keeping with the wishes of the clerics, I trudged three miles to the ‘fan festival’ area on Doha’s picturesque Corniche, where I discovered a discreet Budweiser tent situated in one corner.

There I found about 40 brightly lit fridges containing several thousand cans of lager which I imagine some fans would regard highly in the 33C (92F) temperatures. ‘Hello,’ I said to an official at the perimeter. ‘Could I possibly get a beer?’

Unfortunately, in no uncertain terms, she told me the Budweiser ‘facility’ was closed until tomorrow, adding that even then it wouldn’t open until 7pm and I could buy only four drinks of less than a pint each. 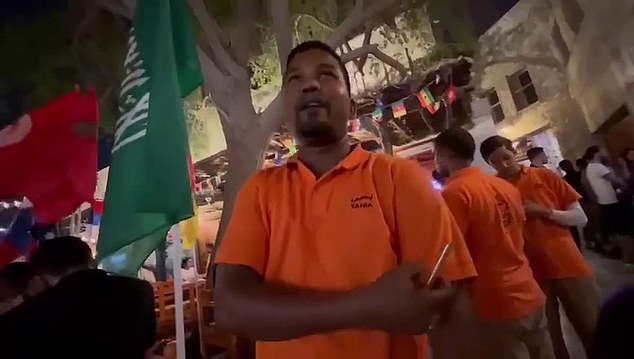 Pictured: Sam is left disappointed and without a beer at another bar

For a proper night out, I was advised to try a high-end hotel.

However, central Qatar is gripped by officialdom terrified by the idea that they are about to be swamped by millions of fans. To manage the expected influx, at every road junction there are several people sending you on a half-mile detour.

Should you pass a subway train station, you can expect another mile of queueing to be actually allowed in. Eventually I was directed to a Best Western hotel. And because I had a passport confirming me as a non-Qatari citizen, I was allowed in. After my epic trek in sweltering heat, with blistered feet for my pains, a pint of cool, refreshing lager was finally mine.