The man accused of abducting Cleo Smith has been pictured as he was loaded onto an airplane to be flown to a high-security prison in Perth on Friday.

He was flown out of the West Australian town of Carnarvon shortly after 11.20am AWST. 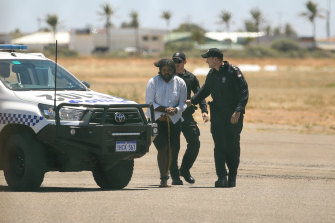 Wearing a white long-sleeved shirt and dark shorts, Terence Darrell Kelly was marched barefoot in chains onto the tarmac on a guarded flight to Perth.

A police vehicle transferred Mr Kelly from the Carnarvon Police Station where has been held since the early hours of Wednesday morning.

Four special operations group officers from the Department of Corrective Services have escorted Mr Kelly on the transfer.

Mr Kelly has been charged after allegedly abducting Cleo and is due to appear in court again on December 6 via video link. 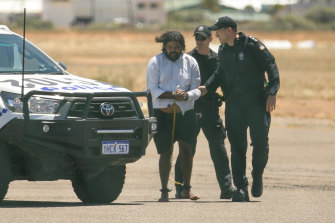 Terence Darrell Kelly has been charged with child abduction. Credit:Getty

His case was adjourned for legal advice.