McDonald's has EXERCISE BIKES for those wanting to burn calories

Big Mac and rides: Chinese McDonald’s has EXERCISE BIKES for diners who want to burn calories as they consume them

Chicken nuggets and Big Mac lovers have gone into overdrive after footage of a McDonald’s exercise bike in one of their stores.

One of the fast food chain’s stores in China has a bike people can ride while eating their food.

In a viral TikTok video, customers at McDonald’s can be seen trying to burn of the calories as they eat them. 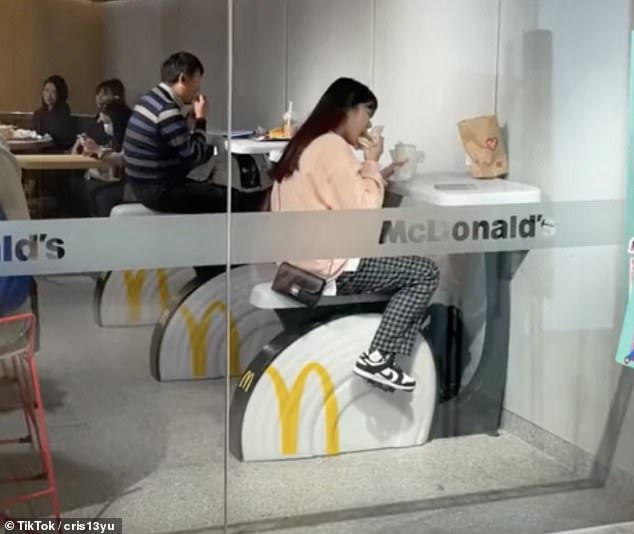 A woman eats a McDonald’s burger whole she pumps her legs on the exercise bike while driving what appears to be Coca-Cola.

A Big Mac meal has 1,080 calories in it, which means people would have to cycle between 13.5 and 27 miles on the bikes if they wanted to counteract the meal’s total calorie count.

The odd footage has been watched 24.5 million times and received more than 2 million likes.

Close to than 39,000 people have also commented on the video.

‘This is like using your phone while charging,’ one user wrote.

Another added it was ‘still more calories consumed than burned.’

Other social media users questioned whether it was bad for your digestive system to eat and cycle at the same time.

Meanwhile, another user asked whether you could use the McDonald’s as a gym by just buying water and working out for an hour.