Kyaw Zwar Minn, a vocal opponent of the February coup in Myanmar which saw military leaders seize control, slept in a black Volvo XC60 outside the Mayfair building he had occupied until his staff kicked him out on Wednesday evening.

Minn was pictured climbing out of the vehicle – which has a picture of Ms Suu Kyi across the back window – on Thursday morning before posing for photos outside the sealed building in protest as police officers stood nearby.

It is thought Minn’s deputy Chit Win led the rebellion against him and has assumed control of the diplomatic post on behalf of the military junta.

Foreign Secretary Dominic Raab has today tweeted his support for Minn, praising his ‘courage’ and calling for the return of democracy to Myanmar.

But British diplomatic sources said they will not be able to continue recognising him as the country’s representative in London due to international protocol. 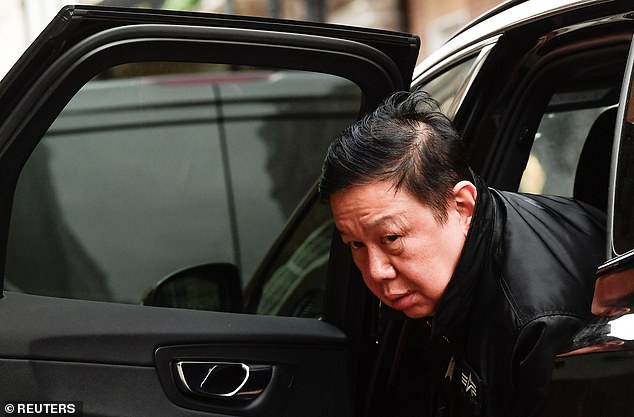 Kyaw Zwar Minn, Myanmar’s ambassador to London until his staff staged a mini-coup against him , climbs out of his car after spending the night sleeping there 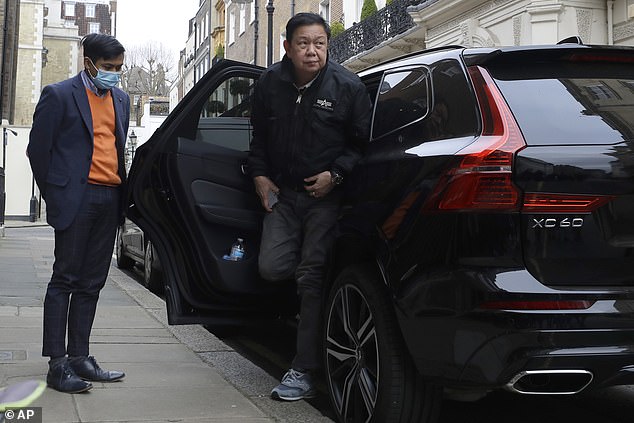 Minn was locked out of Myanmar’s Mayfair embassy building by his mutinous staff on Wednesday night, and forced to sleep inside a black Volvo XC60 parked outside 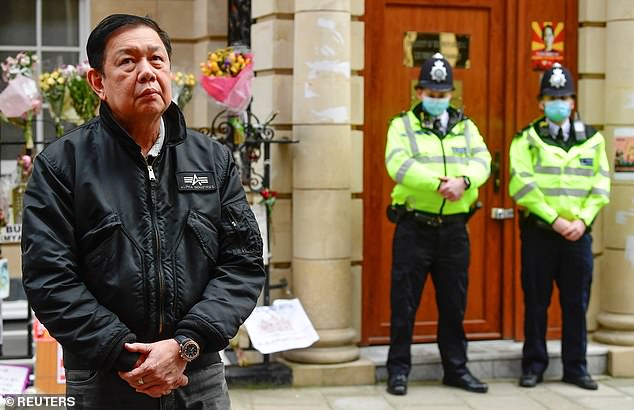 Minn posed for photos in front of the building in protest as police officers stood guard nearby, with Foreign Secretary Dominic Raab praising his ‘courage’

A leading Myanmar actor, singer and model who has backed the country’s anti-coup protests was arrested on Thursday, his sister said, as the junta hunts more than 100 celebrities for supporting the movement.

The country has been rocked by daily protests since the military seized power on February 1, and the authorities have launched a bloody crackdown on dissent, with hundreds killed and more than 2,500 arrested.

Paing Takhon, 24 – a star in both Myanmar and neighbouring Thailand – has been active in the protest movement both in person at rallies and through his massive social media following.

‘Some 50 soldiers with eight military trucks,’ came to arrest him from his mother’s home in the North Dagon area of Yangon early Thursday, his sister Thi Thi Lwin posted on Facebook.

‘As he’s seriously ill, they arrested him calmly without violence. We do not know where he’s taken,’ she added.

It comes after Myanmar sent them formal notification that his diplomatic status had been withdrawn.

The announcement will dash Minn’s hopes after told the Daily Telegraph on Wednesday that Britain ‘will not accept’ the coup against him.

It is not clear what will happen to Minn now, though he will likely be able to apply for asylum because of the risk of arbitrary detention or torture if he returns home.

Military leaders have cracked down on pro-democracy protesters and supporters of Ms Suu Kyi since their takeover in February, shooting hundreds dead on the streets and detaining thousands of others – including Ms Suu Kyi herself.

Mr Raab condemned the ‘bullying actions of the Myanmar military regime’ after the nation’s ambassador to the UK was barred from entering the London embassy.

He tweeted: ‘We condemn the bullying actions of the Myanmar military regime in London yesterday, and I pay tribute to Kyaw Zwar Minn for his courage.

‘The UK continues to call for an end to the coup and the appalling violence, and a swift restoration of democracy.’

Speaking to the Daily Telegraph on Wednesday night, Minn said that as he left the embassy his colleagues ‘stormed inside and took it.’

‘They are from the Myanmar military,’ he added. ‘They are refusing to let me inside.

‘They said they received instruction from the capital, so they are not going to let me in. This a coup.’

Police officers were scrambled to the Charles Street site but have not entered the building, which diplomatic protocol means is technically on foreign soil.

Protesters also gathered on the street outside to rally against the military’s takeover of the embassy.

Kyaw Zwar Minn said he was in contact with the British Foreign Office, and Whitehall sources confirmed the Government was speaking with the Myanmar regime.

Myanmar’s state broadcaster reportedly said the ambassador, who has served as Naypyitaw’s man in London since 2014, had been summoned back to Naypyitaw after making an unauthorised statement.

Kyaw Zwar Minn has been a thorn in the military’s side since the February coup and has called for the release of Suu Kyi and ousted President Win Myint, drawing praise for his ‘courage’ from Dominic Raab.

Britain has sanctioned members of Myanmar’s military and some of its business interests in wake of the coup, and has demanded the restoration of democracy.

An FCDO spokesperson said: ‘We are seeking further information following an incident at Myanmar’s embassy in London.’

Scotland Yard said in a statement: ‘We are aware of a protest outside the Myanmar embassy in Mayfair, London. Public order officers are in attendance. There have (been) no arrests.’