Bill Belichick is still the best coach in the NFL. He just doesn't have the best quarterback in the NFL anymore.

Belichick reached a milestone Sunday. He won his 324th game, counting postseason, which tied him with George Halas for second in NFL history. He's 23 wins behind Don Shula in that category.

And he's on a winning streak with rookie quarterback Bailey Zappe. How many coaches would be able to pull that off?

The Patriots looked like they were finished a few weeks ago, but it's common for them to play poorly early in the season and then make everyone who wrote them off look bad. The Patriots are 3-3 after winning 38-15 at the Cleveland Browns on Sunday. That follows a 29-0 win over the Detroit Lions last week.

Nobody likes it when you praise Belichick. He's not cuddly and likable. When Tom Brady left and had success with the Tampa Bay Buccaneers while the Patriots' record slipped, it became easy for Belichick's critics to find reasons to say he wasn't really that good, as ridiculous as that is. It got very loud early this season when the Patriots started 1-3, with an offense being led by Matt Patricia and Joe Judge, which seemed to make no sense.

But the Patriots are finding a way, again. In 2020 they were in the playoff race with Cam Newton, who threw eight touchdowns and 10 interceptions that season. Last season they made the playoffs with rookie quarterback Mac Jones, the fifth QB selected in his draft class, though everyone seemed to conveniently forget about that over the offseason.

Now Belichick has his team winning with Zappe. On Sunday the Patriots' offense was far better than the Browns, even though Cleveland has a more talented player at just about every position. That's coaching. The Patriots' defense choked off the Browns in every way, and New England's offense looked good with Zappe running the show. Nobody would have seen that coming. Zappe had 309 yards, two touchdowns and a 118.4 passer rating. He looked good, but part of that is the Patriots putting him in positions to succeed. That's what they do.

Zappe was an odd pick in the fourth round. It was ahead of where most draft analysts figured he'd go, and the Patriots had Jones coming off a good rookie season. Then Jones suffered a high ankle sprain, Brian Hoyer suffered a concussion and the Patriots had to turn to Zappe. At that point it looked like they were in a lot of trouble, even though an overtime loss at the Green Bay Packers with Zappe playing in an emergency wasn't a bad loss. But they were 1-3 with an unheralded rookie quarterback for a few weeks.

It is turning out OK. The Browns aren't great, but they're not bad. And the Patriots dominated them with Zappe. What Belichick is doing isn't easy. It's not like the Browns look any good with Jacoby Brissett, who has way more experience than Zappe.

It's more fun to dislike Belichick than give him his rightful due as the greatest coach ever (he is the GOAT, this is hardly in question anymore if you're remotely unbiased), but he keeps getting the most out of his Patriots rosters after they've been buried by everyone else. In Belichick's own way he's building his own legacy without Brady, even if nobody wants to credit him for that. He'll just keep collecting wins and records. 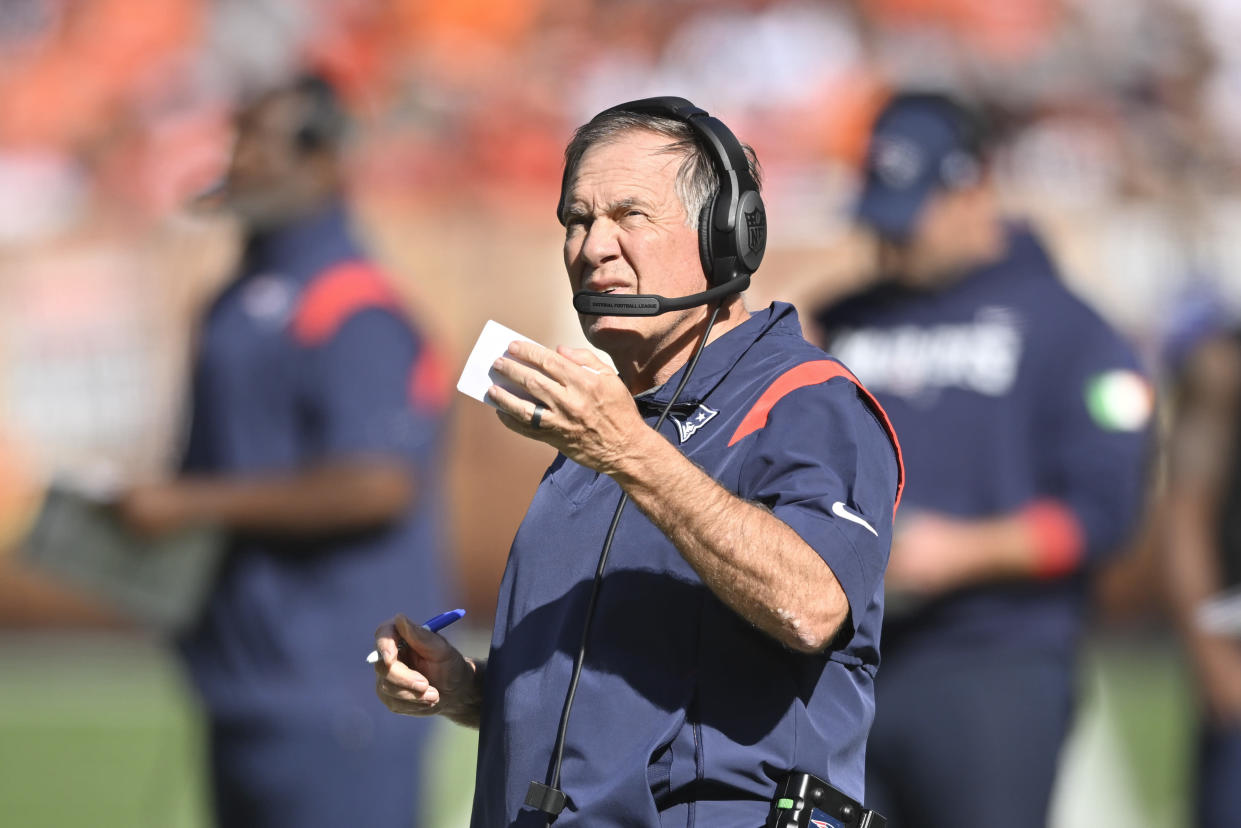 Here are the rest of the winners and losers from Week 6 of the NFL season:

Brian Daboll, NFL Coach of the Year?: It's early, but Daboll is making a great case for the head coaching honor.

The New York Giants are 5-1 after their second straight upset win. They came back to beat the Packers last week and came back to beat the Baltimore Ravens 24-20 on Sunday. The defense forced two Lamar Jackson turnovers in the final minutes. One was an interception that led to a go-ahead touchdown and the other practically put the game away. The second one was a fumble caused by first-round draft pick Kayvon Thibodeaux. After that, Saquon Barkley slid down at the 1-yard line instead of scoring, and the Giants ran out of the clock on the win after that.

There will be questions over how good the Giants really are, but their record is good enough to put them in the playoff hunt. And it's enough to get Daboll, in his first season as head coach, a lot of positive buzz.

While we debate if Sunday's result was due to good New York Jets or bad Green Bay Packers, all that matters after a shocking win is that the Jets are 4-2. That's right, 4-2 — did that sneak up on you?

The Jets are playing much better and Saleh deserves credit for that. The 27-10 win over the Packers — goodbye, remaining survivor pool players — comes after a win over the Miami Dolphins, which isn't a bad stretch. The Jets played very well on defense against Aaron Rodgers and Green Bay — again, the debate over how much that has to do with the Packers' struggles will continue all week — got a key special teams play on a blocked punt for a touchdown and leave Wisconsin with a big win.

Saleh wasn't going to be given endless patience, so a streak like this to start his second season is a good sign. Maybe the Jets can keep it going for a while.

Ja'Marr Chase: He hasn't had a huge season yet for the Cincinnati Bengals, but he's still one of the best in the league.

When the Bengals needed a big play Sunday, Chase delivered. Chase turned a short catch into a 60-yard touchdown, using his explosive speed to get past two Saints defenders to the end zone with 1:57 left. That gave the Bengals a 30-26 lead.

The Bengals didn't play great. They hung around and then a bad punt late in the fourth quarter set up the drive that ended with Chase's touchdown. It hasn't been the easiest start for Cincinnati (3-3) this season but they still have stars like Chase. That was enough for the win on Sunday.

Matt Ryan: He hasn't looked great this season for the Indianapolis Colts, but he had a signature moment on Sunday.

Ryan hit rookie Alec Pierce for a go-ahead 32-yard touchdown with 17 seconds left and the Colts got a massive win in the AFC South race. They won 34-27 after it looked like they might lose the season series to the Jaguars. Ryan came up with a huge game-winning drive after Trevor Lawrence led the Jaguars to the lead with less than three minutes left.

The Colts were without Jonathan Taylor (ankle) and Nyheim Hines (concussion) on Sunday. Their offense had struggled most of the season. But the win keeps the Colts (3-2-1) going in the AFC South race. If it leads to a Ryan resurgence, all the better.

Steve Wilks: The good news is Wilks got another chance to be a head coach. The bad news is he might not win any games the rest of the season.

The Carolina Panthers are bad and things got worse for them Sunday. They lost 24-10 to the Los Angeles Rams but the game will be remembered for receiver Robbie Anderson melting down, having words with receivers coach Joe Dailey and being told by Wilks to go back to the locker room. Anderson is likely to be cut or traded after that, which is probably not what Wilks wanted to be dealing with a week after taking over the interim job.

Matt Rhule didn’t work out with the Panthers, and that’s why he was fired. But nothing is fixing this mess in Carolina. Players will be traded. Anderson’s tantrum is likely to get him shipped out too. Wilks, who got just one year as Arizona Cardinals head coach, had to take the opportunity to coach the team the rest of the season. Those chances aren’t guaranteed. But it’s hard to see him having any success with the Panthers the rest of the season. No coach could save them.

Tampa Bay Buccaneers: The Bucs lost to the Pittsburgh Steelers, who had to turn to Mitchell Trubisky due to a Kenny Pickett injury. That's really bad.

The Bucs' offense in particular looked punchless on Sunday in the 20-18 loss. They had very few explosive plays despite multiple injuries in the Steelers' secondary. The Buccaneers scored late but couldn't get the two-point conversion, then couldn't get the ball back to Tom Brady. They might not have done much with it anyway. And you can't really blame injuries anymore; the Bucs are about as healthy on offense as they're going to get. They're still struggling.

Brady memorably retired for 40 days this offseason, and this probably isn't what he came back for. The Bucs are 3-3 and the biggest thing in their favor might be that they play in a bad NFC South. There's not much else positive to say.

San Francisco 49ers and their injuries: The 49ers are a good team but you wouldn't have known it Sunday.

Two things worked against San Francisco: travel and injuries. Probably not in that order.

The 49ers were playing their second straight game in the Eastern time zone, and Sunday's was an early start. That's not easy for a West Coast team. And the 49ers were missing multiple players including offensive tackle Trent Williams and defensive end Nick Bosa, two of the best players in the NFL.

As a result, the Atlanta Falcons controlled a 28-14 win. Against a depleted 49ers defense, the Falcons had a big day. Marcus Mariota had a 144.6 passer rating, with two passing touchdowns and one rushing TD. The Falcons are 3-3, same as the 49ers.

San Francisco still has a chance to have a good season, but it needs to get healthy soon.

Miami Dolphins' luck: Not even Mike McDaniel's game planning can save the Dolphins if they're going to lose a quarterback a week.

In three straight weeks the Dolphins lost their starting quarterback in the first half. On Sunday it was rookie Skylar Thompson, who hurt his thumb in the first half of a 24-16 loss against the Minnesota Vikings. Teddy Bridgewater, the quarterback who was knocked out of the game last week, came in and was ineffective. The Dolphins' defense tried keeping Miami in the game, but eventually a huge fourth-quarter turnover led to a long Dalvin Cook touchdown and that was it.

The Dolphins started 3-0 this season, then have lost three in a row as their quarterbacks have gone down. That has eliminated all of the positive momentum from the start of the season.