The collapse of powersharing arrangements in Northern Ireland appears to have been averted after a late night deal on Irish language laws paved the way for new Stormont leaders to be appointed.

The UK Government announced after midnight that it had committed to passing the stalled laws at Westminster this autumn if they are not moved at the Northern Ireland Assembly before that.

The move was enough to convince Sinn Fein to drop its threat not to nominate a deputy first minister as joint head of the devolved executive.

DUP leader Edwin Poots has confirmed that Paul Givan will now be formally nominated for the role of first minister while Sinn Fein said Michelle O’Neill will be nominated to return as deputy first minister.

The developments came after a night of intensive talks involving Northern Ireland Secretary Brandon Lewis and DUP and Sinn Fein delegations in Belfast. 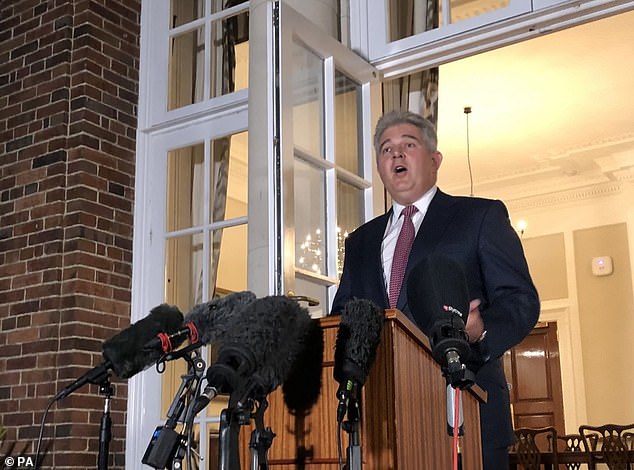 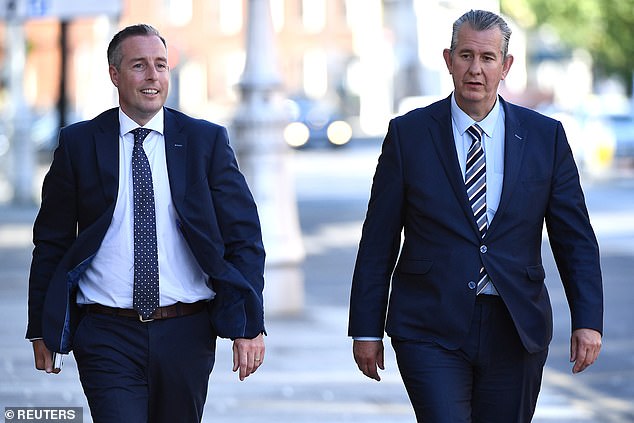 Edwin Poots, (pictured right) the new leader of the DUP, has confirmed that Paul Givan (pictured left) will be nominated to be the next first minister of Northern Ireland

Addressing the media outside Stormont House close to 1am, Mr Lewis said both parties had agreed to reconstitute the Executive by nominating to the positions of first and deputy first ministers later today.

The DUP and Sinn Fein have both confirmed they will nominate to the roles and the Assembly authorities are working to schedule a special sitting of the legislature.

If the nominations proceed, the Executive will be able to hold a scheduled meeting later today to decide the latest pandemic relaxations for Northern Ireland.

Mr Lewis said it remained his preference for the language laws to be brought forward through the Assembly by the Executive, as originally envisaged in the 2020 New Decade New Approach (NDNA) deal that restored power-sharing after a lengthy breakdown.

‘I am disappointed that it has not yet brought this legislation forward in the Assembly,’ he said.

‘However, following my intensive negotiations with the parties over the last few days, I can confirm that if the Executive has not progressed legislation by the end of September, the UK Government will take the legislation through Parliament in Westminster. If that becomes necessary, we will introduce legislation in October 2021.’

He added: ‘I now expect the DUP and Sinn Fein to nominate a first and deputy first minister in the Assembly at the earliest opportunity today.

‘They have confirmed to me that they will do this, reflecting their enduring commitments to all aspects of the NDNA agreement.

‘This will allow the Executive to return its focus to delivering on the issues that really matter to the people of Northern Ireland, issues such as health care, housing, education and jobs.’

A stand-off between the Executive’s two main parties over the thorny language issue had been threatening the future of the fragile institutions in Belfast.

The issue came to a head this week as a result of the process required to reconstitute the Executive following the resignation of ousted DUP leader Arlene Foster as First Minister.

The joint nature of the office Mrs Foster shared with deputy first minister Michelle O’Neill meant that her departure automatically triggered the removal of Ms O’Neill from her position – as one cannot hold post without the other.

In order to form a functioning executive, and avert a snap Assembly election, both roles have to be filled by a deadline of this coming Monday at 1pm.

While the DUP has been poised to nominate Lagan Valley MLA Mr Givan as first minister, Sinn Fein had made clear it would not renominate Ms O’Neill until it received assurances from the DUP that it would press ahead with the long-delayed Irish language laws. 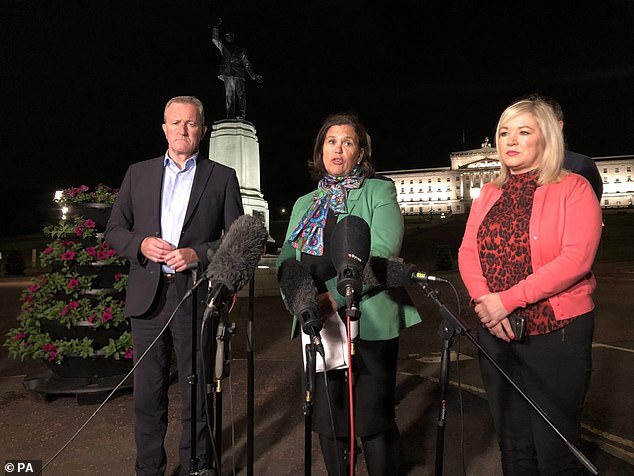 The legislation, which includes the creation of Irish and Ulster Scots commissioners and the establishment of an Office for Identity and Cultural Expression, is an unfulfilled commitment within the 2020 NDNA deal.

While new DUP leader Mr Poots, who succeeded Mrs Foster, had vowed to implement all outstanding aspects of NDNA, he has declined to give Sinn Fein a specific assurance that he will move on the language laws in the current Assembly mandate, a key demand of the republican party.

Amid the dispute, earlier this week Sinn Fein asked the UK Government to step in and move the legislation at Westminster instead. The DUP had warned Mr Lewis against such a step, characterising it as an overreach into devolution.

However, in the early hours of Thursday the Secretary of State announced that the Government would table the language legislation at Westminster in October if Stormont had failed to do so by the end of September.