NSW reported a record 11,201 new COVID-19 cases on Wednesday and three deaths, as hospital admissions rose to 625, including 61 people in intensive care.

Hospital admissions increased by 68 on the 557 reported on Tuesday. 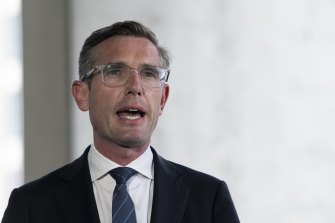 “From January 1, travellers into Qld from interstate hotspots can use a negative rapid antigen test to satisfy border pass requirements,” Ms Palaszczuk said on Twitter.

On 2GB radio on Tuesday afternoon, Mr Perrottet called for an end to “tourism testing” of asymptomatic people and said NSW Health had advised PCR tests for interstate travellers were “nudging 30 per cent” of the state’s daily tests.

The NSW government announced on Tuesday it had placed an order for 20 million rapid antigen tests, which were expected to arrive by the end of January and provided to people free of charge.

Long lines have formed at PCR testing clinics over the festive period, with most clinics open over the Christmas and new year period but some closed or operating on reduced hours, NSW Health states.

Despite numerous facilities closing at midday, particularly over the public holidays this week, Mr Perrottet claimed they were operating at “full capacity”.

“Many of those clinics were not going to be open because they need to get their testing results back as quickly as possible. We have ensured and worked incredibly hard with both the private companies and NSW Health to have them operating at maximum capacity, and they are,” he said.

In a direct plea, Mr Perrottet asked people who are not unwell and who have not been asked to get a PCR test by NSW Health to “please don’t do so”.

“I know this runs counter to everything we’ve been saying over the last two years in relation to testing, so I know we’re going through an adjustment phase … but there are many people who are lining up for tests who do not need them,” he said.

He also defended his decision to ease restrictions on December 15, including allowing the unvaccinated into hospitality venues and non-essential shops. Indoor masks and QR codes in settings such as supermarkets have since been reintroduced in the past week.

Asked whether he regretted dropping restrictions, Mr Perrottet replied: “No, not at all.”

“We’ve always said as we open up, case numbers will increase,” he said. “These are the difficulties we’ll go through … but I think NSW, despite this, is in a very strong position, and I’m very confident about 2022.”

St Vincent’s Hospital Sydney pathology service SydPath on Tuesday said it had closed its East Sydney Arts Centre and Rushcutters Bay Park testing clinics until further notice, and its Bondi Beach drive-through clinic would open from 8.30am and 12pm.

Its current test processing time is “up to four days”, according to its website.

The service has blamed human error for two bungles in the past week, including 400 COVID-positive people wrongly being advised they were negative, and a further 950 people being sent premature negative results when 486 of them were positive.