Influenza vaccines will be free to people across NSW as early as next week in a bid to curb a massive rise in flu infections that have soared to almost 12,000 this month.

NSW Health Minister Brad Hazzard has warned that influenza season has “hit the state harder and earlier than it has for many years”. He urged people to get the flu jab amid enormous pressure on the health system, with thousands of people presenting to emergency departments with influenza-like illness and 380 hospitalised with the virus this year.

“This flu season could be as bad if not worse [than previous seasons],” Hazzard said. 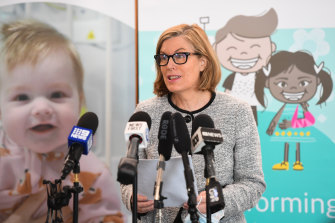 As surging cases put extra pressure on hospitals and ambulances around the country, the Australian Technical Advisory Group on Immunisation (ATAGI) is expected to announce fourth COVID-19 vaccines will be expanded to people with chronic health conditions such as diabetes.

Fourth coronavirus vaccines are approved only for severely immunocompromised people, those aged 65 and over and First Nations people aged 50 and over, and experts say there is limited data about the efficacy of rolling out the fourth jab to the broader population.

NSW has reported 11,704 flu cases this month, a fourfold increase in the numbers recorded in April.

On Monday Premier Annastacia Palaszczuk announced that flu vaccinations would be free for people in Queensland from this week until June 30. Senior health sources told the Herald that making flu vaccines free across NSW would cost the state $20-$25 million.

“This is a one-off arrangement that is in the context that we still are in a pandemic and trying to remove some enhanced respiratory risks to the population of the convergence of the pandemic and flu season,” Hazzard said.

“The flu strains going around at the moment are H1N1 and H3N2,” Chant said. “H1N1 is predominantly affecting younger children. The flu season has kicked off after we’ve had almost no flu for the last two years … about 15 per cent of flu tests are now positive.”

Health officials are particularly concerned about the rapid rise in cases with much lower levels of immunity across the population and a slower than usual uptake, with 16 per cent of people aged five to 65 having received their flu vaccine this year.

NSW Chief Paediatrician Dr Matt O’Meara said thousands of children under 10 had presented to hospitals with the virus this flu season.

“Children and young people have been most severely affected so far. We expect it’s going to be a big year for flu,” O’Meara said.

He said children under about two were particularly vulnerable because COVID-19 restrictions and closed borders meant they had never been exposed to the flu.

“It’s not yet winter, but flu has arrived … and the rates of vaccination have been really low,” O’Meara said.

He said children often experienced a fever, runny nose or sore throat, cough and difficulty breathing, with many becoming “quite unwell for up to a week”.

“Influenza is generally not a mild illness for children, and it’s the youngest children who are most clearly affected. In a typical year in NSW you would expect about 100 babies under six months of age to be admitted to the hospital”.

About one in 10 children who are admitted to hospital with influenza end up in intensive care.

“Mondays are very big days in emergency departments because people use discretion about not going on the weekend and then come to ED on a Monday,” she said. Monday’s total was an increase of about 500 to 1000 on those who would normally present on that day before the pandemic.

Earlier this month the Herald reported extreme demand on hospitals had led patients to be treated in corridors and ambulance trolleys unable to offload patients due to lack of beds and elective surgery waitlists blowing out.

Doctors have warned that bed block – when hospitals are clogged with patients they do not have the beds to admit – was the “worst it has been” in decades.

NSW chair of the Royal Australian College of GPs, Dr Charlotte Hespe warned it was essential people get the flu vaccine to protect older family members.

“We are seeing an influenza epidemic, and it does kill the vulnerable. We are becoming more complacent with respiratory viruses again and the flu shot is vital in protecting those most at risk,” Hespe said.