Premier Mark McGowan said the unvaccinated 27-year-old man was a close contact of an existing case, who shared a bathroom with him. 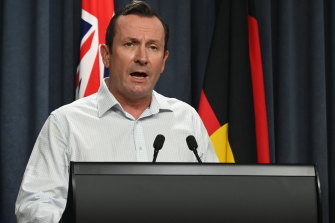 Mr McGowan said the man was infectious in the community and listed several new exposure sites, including Domino’s Pizza in East Fremantle on December 28 and Portside Boulders climbing gym on December 27.

About 720 close contacts of infectious cases have been identified, with 40 of those yet to be tested.

Mr McGowan repeated comments from yesterday that there were 16 people unlikely to be contacted because they shared false information on contact registers.

The Premier was speaking after a national cabinet meeting where a new definition of COVID-19 close contacts was agreed to by the Commonwealth, state and territory leaders.

The definition will be changed to mean someone who has been with a confirmed case for more than four hours within a household.

Prime Minister Scott Morrison announced the change would take place from midnight tonight in NSW, Victoria, the ACT, South Australia and Queensland and in Tasmania from midnight on January 1.

Testing requirements were also discussed at the meeting as Omicron sweeps the country with more than 20,000 new cases recorded nationwide on Thursday.

Mr Morrison said the change to the definition of a close contact was “practical” and would help take pressure off testing systems.

Mr McGowan said he had agreed in principle to the changes, but it would not be adopted in WA until at least February 5 when the state is expected to open its borders.

“Western Australia is not in that position and that is accepted and understood at national cabinet,” he said.

“WA will continue with our existing testing, isolation and close contact settings for the time being and in the future. If we need to move to the national settings, that is what we will do.”

The meeting came as it was revealed COVID-19 had made it to the South West.

By Wednesday evening, health authorities added nine new locations to its list of exposure sites which spread out from Perth down to Bunbury.

The sites include two carparks at Preston Beach and Bunbury for five days from Christmas Eve.

The health advice for people who were on a B56 Australind train ride from Bunbury to Perth on Tuesday between 2.45pm and 5.15pm, at Belliar Village Liquorland on Friday between 4pm and 5pm, and the Aviary Bar in Perth on December 22 from 7pm to 9.30pm is to get tested immediately and isolate until getting a result.