Oscar and Bafta winners will get fast-track visas into the UK under a new Home Office bid to attract ‘global talent’.

Non-UK citizens who pick up gongs in the Golden Globes, Baftas, Brit Awards and the Mobos will be able to obtain three-year visas under the Home Office scheme.

Home Secretary Priti Patel said the new fast-track system is aimed at attracting the ‘best and brightest’ from around the world to the UK.

‘Winners of these awards have reached the pinnacle of their career and they have so much to offer the UK,’ she said. 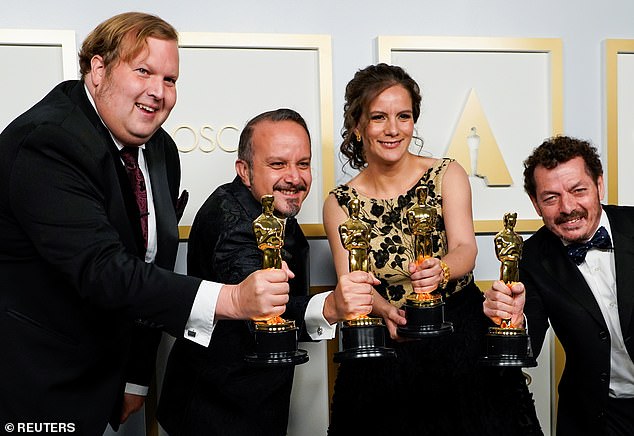 Oscar and Bafta winners will get fast-track visas into the UK under a new Home Office bid to attract ‘global talent’. Pictured: Oscar winners of best sound at the 2021 Oscars last month

‘These important changes will give them the freedom to come and work in our world leading arts, sciences, music, and film industries as we build back better.

‘This is exactly what our new point-based immigration system was designed for – attracting the best and brightest based on the skills and talent they have, not where they’ve come from.’ 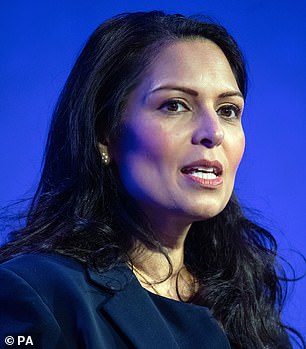 Alongside winners of arts awards, the scheme will include prize winners in the fields of science, engineering and technology.

At present, the visa application process known as the ‘Global Talent route’ means such people have to receive an endorsement from one of six bodies.

From Wednesday, the new system will allow people who hold a qualifying prize to make a single visa application.

Those eligible will include winners of a whole host of Oscar and Tony categories and those who scoop up best international male or female at the Brit awards, the best international act at the Mobos or the lifetime achievement award at the Grammys.

Winners of best film actress, actor or director at the Baftas would also qualify as well as anyone picking up the Nobel Prize for literature, some sciences and medicine or the Turing Award.

The list of qualifying prizes will be kept under review. 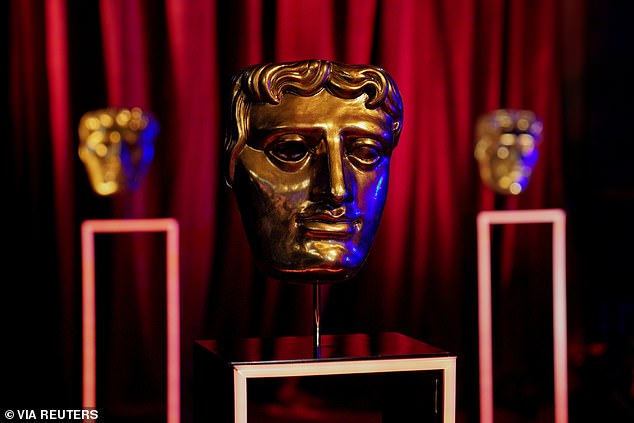 Winners of best film actress, actor or director at the Baftas (pictured: A Bafta award mask) would also qualify as well as anyone picking up the Nobel Prize for literature, some sciences and medicine or the Turing Award

The fast-track scheme is part of the UK’s post-Brexit plans to move to a points-based immigration system.

Britain’s new points based system resembles the one currently in effect in Australia.

The new system will see points awarded to applicants based on their skills, English speaking abilities and salary.

Migrant workers who want to move to the UK will have to qualify for 70 points.

Having a job from an approved employer for a skill job will get applicants more than half way to a visa, with 40 points.

Those who have jobs which pay them more than £25,600-a-year will earn a further 20 points.

Another 10 points can be earned for being able to speak English.

Extra points can be earned by having top level qualifications – such as a PhD – or having a job offer for a position which the country has a shortage of.

Those who gain enough points under the system will be awarded a skilled worker visa, which lasts for up to five years before it has to be renewed.

In addition, applicants will also have to pay a £624 per year health surcharge and be able to prove that they can support themselves financially.

The government’s official website states: ‘Under the points-based immigration system, points will be awarded for a job offer at the appropriate skill level, knowledge of English and being paid a minimum salary.

‘Skilled worker visas will be awarded to those who gain enough points.

‘The new immigration rules will ensure that businesses can recruit the most highly qualified from across the globe to drive the economy forwards and keep the UK at the frontier of innovation.

‘It will also encourage employers to focus on training and investing in the UK workforce, driving productivity and improving opportunities for individuals, especially those impacted by coronavirus.’