Mud for it! Peppa Pig fan, three, is a splash after beating hundreds of other children in the World Puddle Jumping Championships

A three-year-old Peppa Pig fan was inspired by her cartoon hero to be crowned the winner of this year’s World Puddle Jumping Championships.

Luna Rudd, from Northampton, took the title after her enthusiastic puddle diving, which left her covered head to toe in mud, wowed the judges at Wicksteed Park in Kettering.

Judges gave scores based on the height of the jump, enthusiasm, distance of splash and stickability – the amount of mud which clings to each competitor.

Hundreds of children from across the world entered the competition – which has previously received unlikely backing from Jacob Rees-Mogg in the House of Commons.

And yesterday it was announced Luna had come out on top at 10th annual World Puddle Jumping Championships.

Her mum Zoe, 28, said: ‘This is the first year she has entered but Luna just loves puddles.

‘We went on a four-mile walk around a nature reserve close to our home and when she saw a big puddle she just had to jump in it. 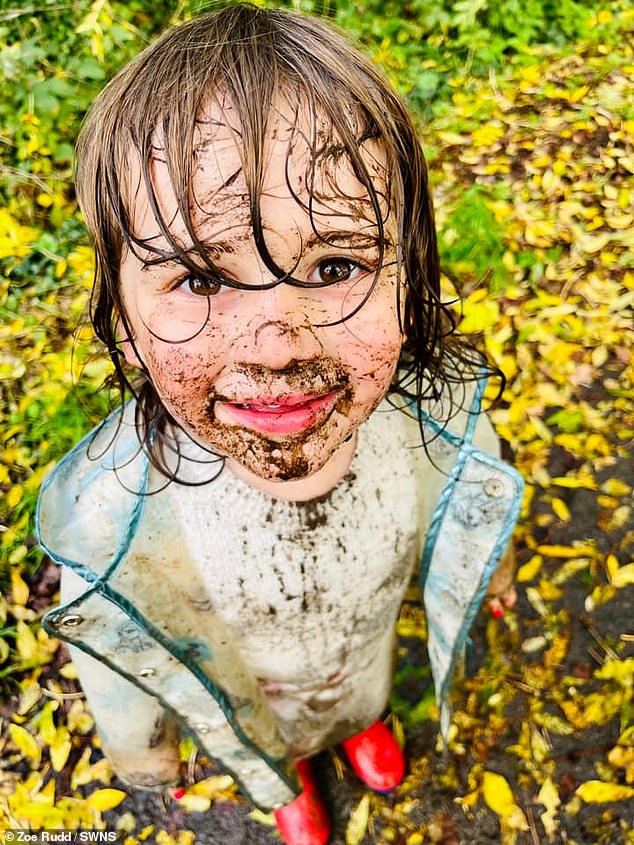 ‘She ended up absolutely plastered in mud and water but she had a great time.

‘She loves Peppa Pig. She always says “you must wear your welly boots if you jump in muddy puddles”.

‘Luna has always loved the outdoors. She’s attracted to mud. I always encourage getting messy.

‘Her nine-year-old brother has autism so getting mucky is a big sensory issue for him.

‘But I still like to encourage it. She helps him with showing that it’s ok to get dirty and mucky.’

Luna finished ahead of Oliver Hart, 5, from Barton Seagrave, Northamptonshire, who came second, and third-placed Emilie Chambers, 4, from Ely, Cambridgeshire. 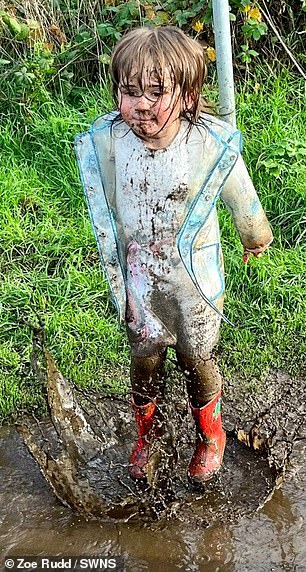 The three-year-old ‘just loves puddles’ her mother Zoe said. She now wins the first prize of a £250 waterproof outfit – to help keep her dry while carrying out her hobby in future

Judges also gave a special achievement award to Nicole Quiram, 18, who submitted a video of herself doing forward rolls in puddles and streams near her home in Richmond, Virginia, USA.

Luna now wins the first prize of a £250 waterproof outfit – to help keep her dry while carrying out her hobby in future.

Wicksteed Park head of sales and marketing Megan Wright said: ‘We have been astounded by the number of superb entries we have received this year and clearly people have been having great fun, which is what the competition is all about.

‘Luna’s entry really caught the judges’ attention and if she carries on jumping in puddles like that she will definitely put her prize to good use.’

Competitors were asked to submit videos of themselves jumping in puddles they had made or found themselves.

They were also invited to use any naturally-formed puddles they found while walking around Wicksteed Park, in Kettering, Northants.

Mats Nilsson from Po.p Kidswear, which sponsored the event, added: ‘We have loved watching all of the entries to this year’s World Puddle Jumping Championships.

‘It has been amazing to see everyone outdoors having so much fun, getting covered head to toe in mud. 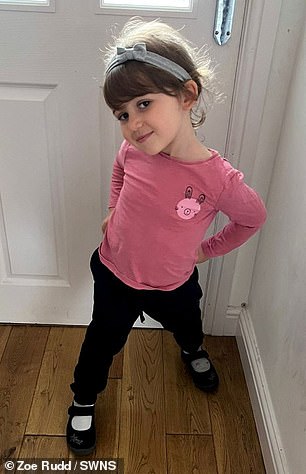 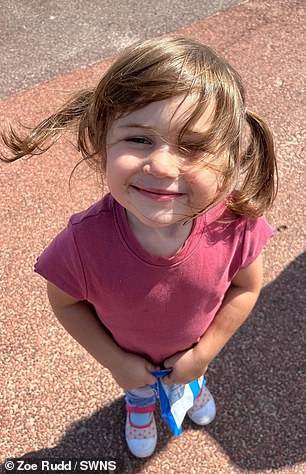 Zoe, 28, said: ‘She loves Peppa Pig. She always says “you must wear your welly boots if you jump in muddy puddles”.’

Two years ago the competition received the support of Tory MP Jacob Rees-Mogg during the pandemic where he bizarrely recalled an episode of Peppa Pig.

Kettering’s Conservative MP Philip Hollobone called for a ‘statement in support’ of the event in the Commons, to which Mr Rees-Mogg said: ‘This is a brilliant idea.

‘Who cannot recall the episode of Peppa Pig when Peppa decides to go and jump in a muddy puddle – that being her favourite activity.

‘She is joined by brother George, by her father and her mother, and I’ve got a feeling even the grandparents join in and they all get covered in mud.

‘Now, I cannot promise my honourable friend that this will be what the Rees-Mogg household are doing on World Puddle Jumping Day, but I think certainly a number of my children will enjoy it very much.’