Physicist who says her ‘naturally loud’ style is part of her German heritage and she was a victim of racist criticism was wrongly sacked for shouting, tribunal rules

A senior academic who claimed criticism of her ‘naturally loud’ voice was racist because she inherited it from her German parents has won a harassment case after university bosses grew sick of her ‘shouting’ and sacked her.

The lecturer admitted she was ‘inherently loud’, ‘naturally argumentative’ in conversation, spoke with vigorous hand gestures, and was so passionate about physics she would get overexcited.

But while many students and colleagues liked the University of Exeter academic’s teaching style, some co-workers found her ‘overbearing’ and ‘highly uncomfortable’ to deal with, the hearing was told.

The physicist was suspended and sacked following a disciplinary hearing in December 2019, after bosses said she was also shouting at PhD students and causing them stress and anxiety.

However, at a tribunal in Exeter, Dr Plaut, who has German parents, claimed her eastern European Jewish heritage and upbringing means she has ‘inherent characteristics of loudness’, and a conversational style that is argumentative with ‘interruption and much hand movement’.

She insisted ‘there was nothing she could do about it’ when she became excited and her body language became demonstrative.

Finding the university guilty of harassment, victimisation and unfair dismissal over the sacking, Employment Judge Paul Housego criticised the way an academic of such long standing could have been treated. 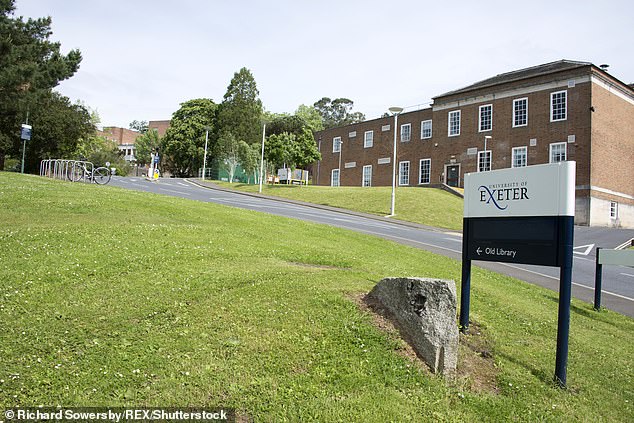 Finding Exeter University guilty of harassment, victimisation and unfair dismissal over the sacking, Employment Judge Paul Housego criticised the way an academic of such long standing could have been treated

Senior management ‘decided Dr Plaut would not be tolerated further’, subjected her to a disciplinary investigation over accusations she ‘shouted’ at a PhD student and then used it as a ‘pretext’ to fire her, the panel concluded.

The experimental physics lecturer – an expert on graphene who was the first female in her department – is now in line to receive compensation after successfully suing the university for victimisation, harassment, and unfair dismissal.

The academic, whose parents moved from Germany before World War Two, joined the university’s physics and astronomy department in 1990.

‘Dr Plaut is passionate about physics,’ the tribunal heard. ‘While she can try to restrain her natural personality, it tends to emerge when she becomes engaged in discussion about physics.

‘She told her students that was how she was, and that they should not take offence.

‘Over the years some colleagues and some students have found this somewhat overbearing, despite Dr Plaut telling students and colleagues that she means nothing by it.

‘There was a view amongst some senior members of the department that Dr Plaut had been allowed for years to get away with behaviour which should really not be tolerated.

‘Others valued her contribution, and accepted that she was not an unpleasant person even when being loudly argumentative in discussion.

‘Dr Plaut says that any negativity towards her by reason of her interpersonal communication style is unconscious racism as it stems directly from her inherent cultural upbringing.

‘She finds particularly offensive the suggestion that her loudness is shouting, and finds the application of that word to her to be a great insult.

To sum up the great weight of evidence given to us, the vernacular phrase ‘she is a Marmite person’ is not inaccurate.’

The hearing was told that in 2017 the University’s Human Resources department became involved in Dr Plaut’s teaching style and she worked with staff to agree on wording to describe it to students.

By this point, the tribunal heard that there was friction with the department and ‘over time HR gradually became less and less tolerant of Dr Plaut’.

The panel was told that in January 2019 she was suspended for gross misconduct over a ‘significantly exaggerated’ claim she shouted at a female student and shone a ‘laser’ in their eyes.

Dr Plaut insisted she had been explaining the scientific concept of saturation and had used a desk light in the student’s face to demonstrate it. However, she apologised for the incident.

In a letter giving her a written warning, the university ‘accepted that Dr Plaut’s loudness was largely unintentional, but expressed concern at her apparent inability to moderate it’.

At a return to work meeting in April of that year, the panel heard her relationship with the university’s senior management soured further when she suggested one of her bosses was not open to criticism in his role as head of equality.

Bosses ‘seized’ upon that comment to launch further disciplinary action against her, the tribunal was told, even though the academic concerned did not want it pursued.

When, soon after, another of Dr Plaut’s students told the university he wished to change lecturers, bosses falsely told him he could only do so if he complained about her.

It resulted in Dr Plaut facing a fresh allegation of ‘frequently shouting during meetings with a PhD student causing them stress and anxiety’.

The tribunal found senior management including Provost Janice Kay wanted to get rid of Dr Plaut.

‘It is plain that (they) all wanted Dr Plaut dismissed and set that in train’, the report said.

The physicist was suspended again and sacked following a disciplinary hearing in December 2019.

Finding the university guilty of harassment, victimisation and unfair dismissal, Employment Judge Paul Housego criticised the way an academic of such long standing could have been treated.

‘This is a very large organisation, of very high reputation, and high professional standards in dealing with the careers of its academics are to be expected,’ he said.

‘This obligation is the greater when dealing with someone who has spent 30 years working for them. Senior management had decided that Dr Plaut would not be tolerated further.

‘The good things she had done over the years were given no weight.

‘The Tribunal does not doubt but for some people Dr Plaut’s approach to life was highly uncomfortable, but that fails to appreciate that this is a façade behind which the evidence is of a long serving dedicated and caring academic.’

Judge Housego suggested one way of dealing with Dr Plaut’s perceived shouting was to be given help and an opportunity to change her approach.

Dr Plaut – whose additional claims of racial and sex discrimination were dismissed by the panel – will now be awarded compensation at a later date.