PM asks for thousands of volunteers to deliver 24-hour jabs

Boris’ booster army: PM asks for thousands of volunteers to deliver 24-hour jabs – even on Xmas Day – as 1 million Britons queue or book vaccine in first 24 hours after his TV appeal

Boris Johnson last night appealed for an army of volunteers to deliver Covid jabs around the clock.

He said tens of thousands of helpers were needed to achieve the unprecedented ‘national mission’ of offering every adult a third dose this month.

More than a million have either had their booster or booked one in the 24 hours since the Prime Minister made a TV appeal to head off a ‘tidal wave’ of Omicron cases.

Yesterday there were long queues for jabs and the NHS booking system creaked under surging demand. Up to 57,000 appointments were made an hour – 16 a second.

The NHS is developing plans for a rapid acceleration of the vaccine programme so that 20million people can be jabbed by January. Hundreds of ‘pop-up’ centres will be opened, including at football stadiums.

Some sites will operate 24 hours a day, even on Christmas Day, while pharmacies will be asked to provide jabs outside their regular hours of business.

The 15-minute wait required after an injection may be ditched to increase capacity at small venues. Meanwhile, 750 members of the Armed Forces were yesterday called in to help with the mission. 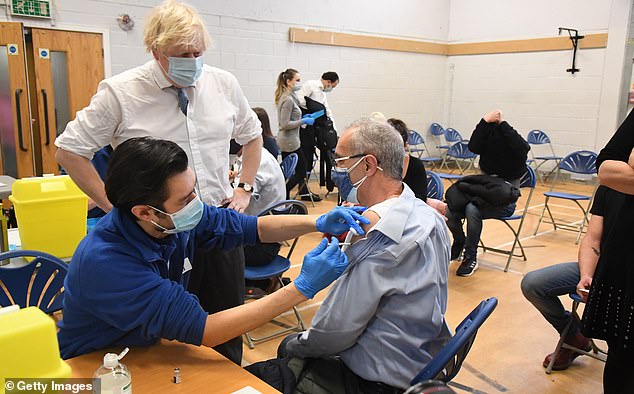 The deployment will include 60 planners and logistics experts working at NHS England, as well as small teams of soldiers helping out across the country.

However, ministers believe they still need tens of thousands of volunteers to staff pop-up centres and other vaccine sites. Mr Johnson said: ‘I’m issuing a call for volunteers to join our national mission to get jabs in arms.

‘Many thousands have already given their time but we need you to come forward again, to work alongside our brilliant GPs, doctors, nurses and pharmacists, to deliver jabs and save lives.’

The booster push follows emerging evidence that a third jab may provide up to 70 per cent protection against infection from Omicron, compared with only negligible protection for those who have had two doses. 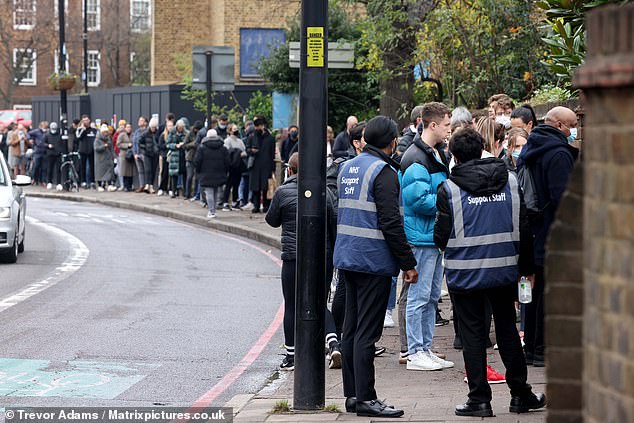 The deployment will include 60 planners and logistics experts working at NHS England, as well as small teams of soldiers helping out across the country

The NHS website crashed yesterday as record numbers rushed to book a booster in the hope of saving their Christmas.

Boris Johnson’s promise to give every adult a third jab by the end of the year triggered a surge in demand that left parts of the UK’s health infrastructure unable to cope. Queues of up to five hours built up at some vaccination centres.

The Government was also forced to suspend temporarily the online availability of home lateral flow kits on the eve of rolling out a new testing regime. From today, all contacts of those who have tested positive for Covid have to take a daily rapid test for a week in a bid to prevent the virus from spreading further.

The weekend saw a record number of booster bookings on the NHS website, with 749,000 slots snapped up. A further 110,000 slots had been booked by 9am yesterday.

Problems with the site began on Sunday afternoon. The Prime Minister’s later TV address led to a further surge, with many of those trying to book met with a message telling them that they had been placed in a queue. Others were unable to get this far and were instead told the site had ‘technical difficulties’. No10 yesterday suggested ‘further capacity’ would be built into the service in coming days to deal with the increased demand. 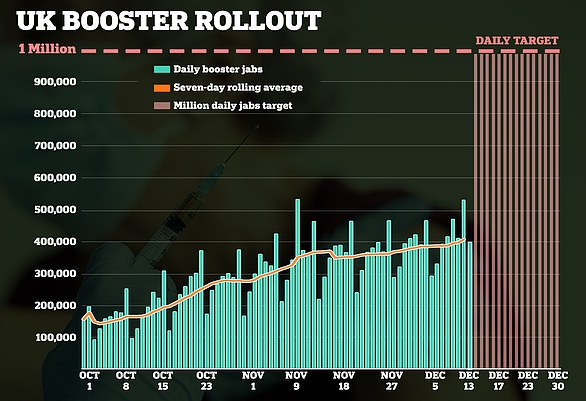 Vaccines Minister Maggie Throup was sidelined yesterday as Sajid Javid said he will now be ‘personally running’ the booster programme.

The Health Secretary said he is taking charge of the rollout and will be responsible for its success.

He insisted that Ms Throup is ‘doing a really important job’ but his decision to lead the initiative is likely to prompt questions over her future.

Her predecessor, Nadhim Zahawi, had a much more prominent role. He attended Cabinet and was frequently seen on TV. Miss Throup took over the role in September after Mr Zahawi was promoted to Education Secretary.

Asked who was in charge, Mr Javid told BBC Radio 4’s Today programme: ‘Maggie Throup is the Vaccines Minister. She is doing a really important job.’

Pressed on whether she was in charge of the rollout, Mr Javid said: ‘I am personally running this programme.’

After the NHS last week announced a recruitment drive for 10,000 paid vaccinators, 4,500 people registered their interest and 13,000 came forward as volunteers.

There are currently 3,000 vaccine sites staffed by more than 90,000 volunteers.

In a letter to health staff last night, NHS chief executive Amanda Pritchard acknowledged that some routine appointments would ‘have to be postponed’ to meet the challenge from Mr Johnson. 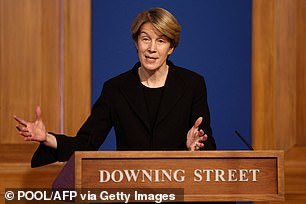 In a letter to health staff last night, NHS chief executive Amanda Pritchard (pictured) acknowledged that some routine appointments would ‘have to be postponed’ to meet the challenge from Mr Johnson

She added: ‘Some other appointments will need to be postponed to the new year. If we don’t do this now, the wave of Omicron could be so big that cancellations and disruptions would be even greater.’

Outlining the rollout plans, Miss Pritchard said the NHS would be ‘creating capacity, both by maximising throughput, efficiency and opening times of existing sites to operate 12 hours per day as standard, seven days per week as well as running 24 hours where relevant for the local community, and through opening additional pop-up and new sites’.

The Medicines and Healthcare products Regulatory Agency has laid down the rule requiring a wait of 15 minutes after receiving a dose of the Pfizer or Moderna jabs.

The regulator last week rejected a request by ministers to drop the wait.

A Whitehall source said that scrapping it was essential to meeting the jabs target because small sites such as pharmacies and GP surgeries did not have space to allow more patients to wait. They are also pushing the regulator to assess the case for vaccinating the under-12s.

Why is the booster rollout being accelerated?

A third dose of the Covid vaccine has been long planned because the immunity vaccines offer against the virus wanes over time. Originally the booster was on offer to the over-40s, but the rapid spread of the Omicron variant means the programme is being sped up. Online appointments for the over-30s were opened yesterday, and from tomorrow those aged 18 to 29 will able to book.

Yesterday morning no fewer than 110,000 people visited the website before 9am to secure a booster jab. This led to the website crashing, and some people were left in a queue for hours. NHS Digital was forced to bring in extra capacity to allow more people to book. A spokesman said: ‘The vaccine booking service is facing extremely high demand and is operating a queuing system to manage numbers. We would advise people currently unable to book to try again later today or tomorrow.’

What’s the situation at walk-in centres?

Thousands have turned up at walk-in vaccine centres up and down the country. Long queues were seen outside many as people tried to get their boosters as soon as possible. Hundreds waited outside the centre in Hungerford, Berkshire, and many had to wait more than four hours to be seen. Some people reported being turned away in parts of the country, due to the huge demand.

When will the third doses be completed?

Boris Johnson announced a new target allowing all adults to get a jab by the end of the year. However NHS England and the Department of Health say the target is that everyone should be offered the chance to book a jab by then – meaning some people may not receive them until January. But Downing Street insist the Prime Minister meant what he said. The target will mean a million jabs will have to be given every day – many more than the previous daily record of around 850,000.

What does it mean for vaccine passports?

People who want to go to a nightclub or another large venue have been told to show the NHS Covid pass to gain entry. Yesterday Sajid Javid said the passports would soon require three jabs to gain entry.