Sprung! Automatic anti-terror bollards in Canterbury have IMPALED almost 80 cars since they were installed as ‘tailgating drivers try to get into the historic city centre’

Bollards have impaled almost 80 cars, including a police vehicle, in Canterbury after they were fitted as an anti-terrorist device.

The 3ft tall bollards, which were installed in the city centre and suddenly shoot up out of the road surface, have backfired with motorists – including the police – facing hefty repair bills.

In the sixteen months since they were installed to ‘spear’ any fleeing terrorists’ cars, they have led to vehicles being damaged and the repair bill runs into tens of thousands of pounds.

Their installation in November 2020 – on the advice of anti-terror police and at a cost of £789,000 – proved contentious, with many questioning the need for such measures.

Critics say drivers who can’t persuade their insurance companies to pay up or don’t want to lose their no claim bonus, will have to hope they get compensation from the council.

The pop-up steel posts at 20 locations, meant to provide a ring of protection around the city centre, allow access only to certain motorists, including residents and traders.

Others, such as delivery drivers and postal workers, can only go through the bollards between 4pm and 10.30am. 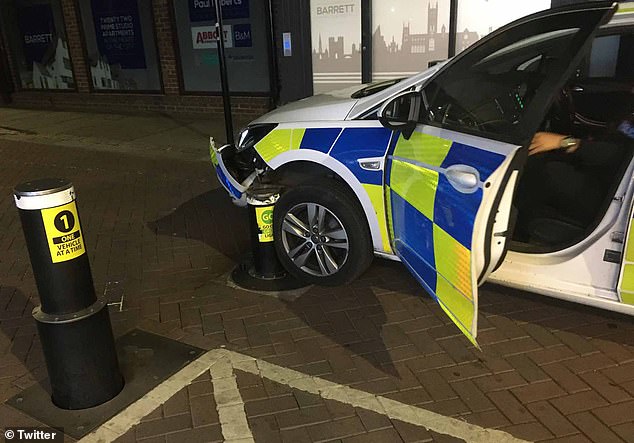 A police car was damaged after getting stuck on one of the bollards in Canterbury city centre on September 7 last year. Emergency services are supposed to have 24-hours access to the area 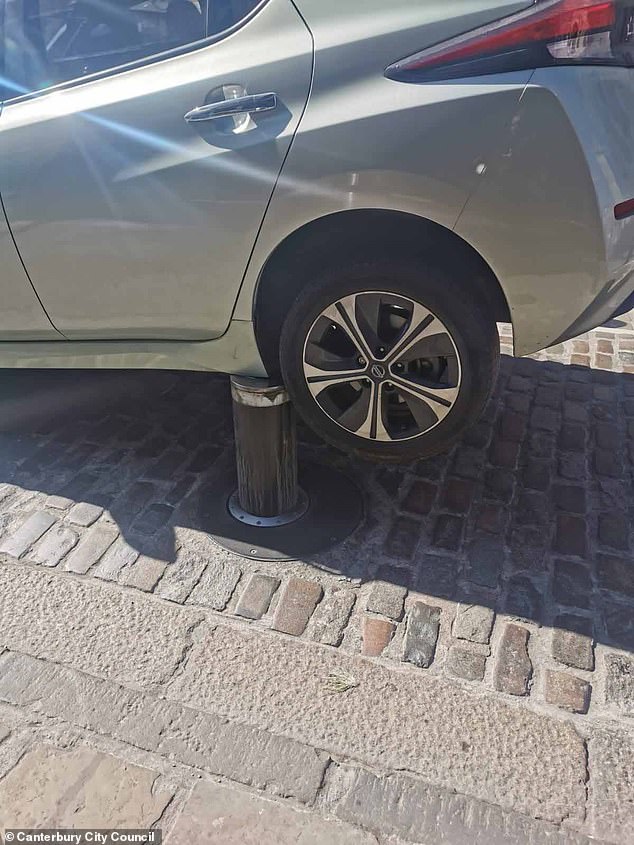 In April last year, there were three incidents in just one week (one pictured above) where cars had been impaled by the security bollards 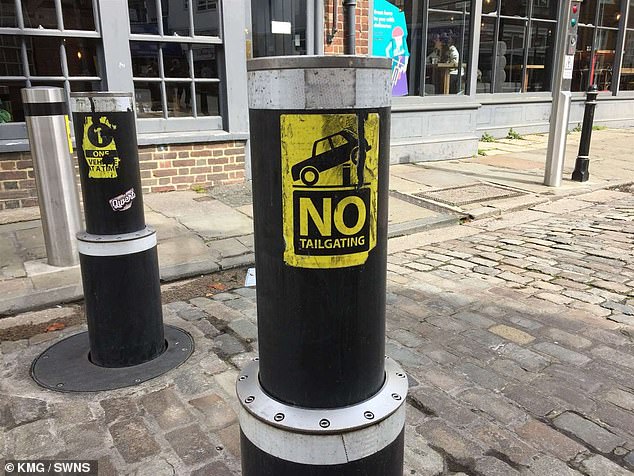 Their installation in November 2020 – on the advice of anti-terror police and at a cost of £789,000 – proved contentious

Automatic bollards in Canterbury: What are the rules for drivers?

The automated bollards are controlled via an intercom and camera system..

Control room staff respond to the intercom and have the final say on who gains access – usually vehicles listed in the traffic regulation order below.

At the exit points, the bollards lower automatically.

Between 4pm and 10.30am, those with city centre access include:

The automated bollards are controlled via an intercom and camera system.

Vicky McWilliam, 55, who lives in The Friars, close to a set of bollards installed near the Marlowe Theatre, called them ‘ugly, pointless and illogical’.

‘They’re a terrible eyesore and it’s loud when the bollards are going up and down, and you’re trying to work from home, which many of us are trying to do now.

‘It’s very loud when a car gets stuck on them and the repair people have to come and sort that out.

‘At least twice in the past two months there have been fuel leakages from impaled cars, and that is dangerous.

‘The sheer amount of money that has been spent on them could have been spent better elsewhere, which really galls me, especially in these difficult times post-Covid. I think it’s shocking.’

Shop manager Nigel Martin, 68, from Burgate, said: ‘I don’t like the idea of them and I don’t think they will stop anything.

‘The town is already congested enough without people queuing up the road to get through the bollards.

‘It doesn’t matter how much signage you put up, it’s whether people read it properly or understand it.

‘We have a lot of foreign visitors who may not speak or read English.’

However, Suzanne Crawley, 43, who works at shoe store The Elves and the Shoemaker in Burgate, supports them.

‘If they’re protecting everyone in the high street from threats, why wouldn’t you have them? It’s not like they’re not signposted.’

City centre councillor Pip Hazelton says she has been ‘worried for some time’ about the number of incidents.

‘I don’t know how much this is costing the council in oversight and management, but I do know that it does nothing for the council’s reputation when time and time again, we see and hear reports of yet another incident.

‘There seem currently to be more questions than answers.

‘Installed to keep our citizens and visitors safe, they currently seem to be more effective at making us a laughing stock.’

Canterbury City Council stated the number of incidents is ‘miniscule’ given how many vehicles pass through the bollards each day.

‘Three quarters of these have been tailgating incidents caused by driver error,’ said a council spokesman.

‘The remainder relate to vehicles attempting to pass over the bollards when they are in the process of lowering, but are not fully lowered – again a result of a mistake by the motorist.

‘People may raise an eyebrow or two at this figure, but we are very clear that the bollards are working exactly as they should be. 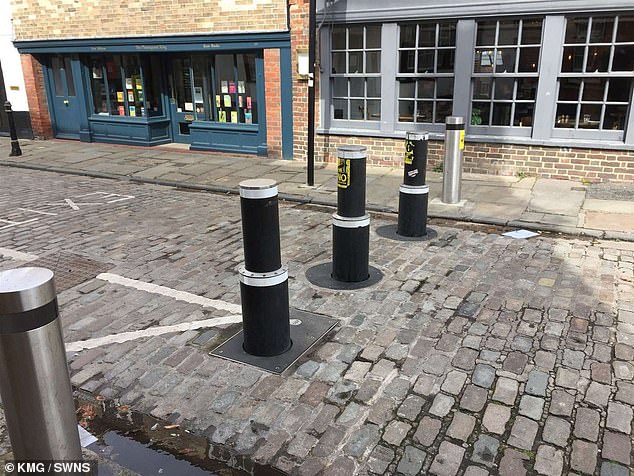 The automated bollards are controlled via an intercom and camera system 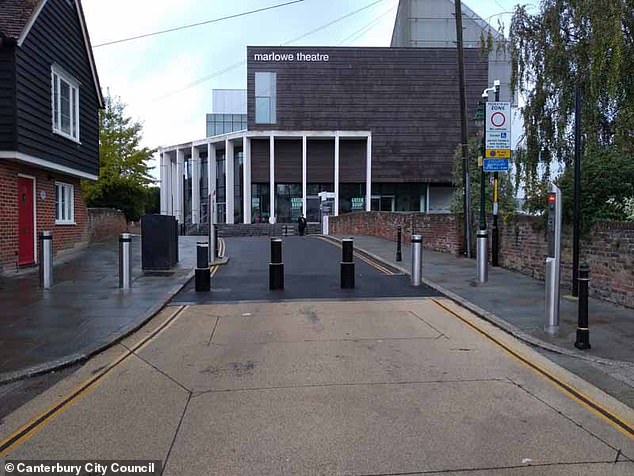 ‘They are successfully controlling which vehicles can come into the city centre, helping to keep everyone safe by preventing terror attacks and enforcing the pedestrian zone rules that have been in place for almost 40 years.

‘There are multiple signs up at each bollard site, along with red stop lights, telling drivers not to tailgate. You really cannot miss them.

‘But we are always happy to take every opportunity to reinforce this message: only drive forward when there is a green light.

‘There is absolutely no point in taking a risk and trying to get through straight after someone else. You will come unstuck.

‘All of this said, however, we do keep the situation under constant review and are looking at new road markings at tailgating incident hotspots to further reinforce the already very clear messaging.’