Frankfurt: The editor-in-chief of Bild, Europe’s largest newspaper and an influential force in German politics and society, has taken a leave of absence while a law firm conducts an investigation into accusations made against him, the publication’s owner said.

Julian Reichelt, the editor, denies accusations of misconduct, Axel Springer, Bild’s publisher, said in a statement. Springer said it had no “clear evidence” of misconduct but had hired the law firm Freshfields to investigate the accusations. It did not specify what they were. 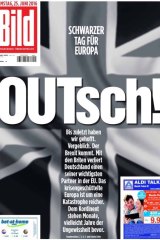 The accusations were first reported by the magazine Spiegel, which cited half a dozen female employees who had worked for the newspaper and complained of coercion by Reichelt. Spiegel did not name the female employees. The magazine said the women accused Reichelt of abusing his position of authority and creating a hostile work environment but did not provide further details.

“To make sure that the investigation process can be seen through to the end undisturbed and the editorial team can work without further burdens,” Springer said, Reichelt “has asked the Axel Springer board to release him from his functions until the accusations have been clarified.”

With a print circulation of 1.2 million, Bild is Europe’s largest newspaper, but like most publications, it has suffered steep declines in print readership. In 2011, daily print sales averaged 2.8 million, according to the newspaper’s website, and that was down from 4 million in 1965.

With its colourful graphics and emphasis on scandal, celebrities and sports, Bild — which means “picture”— is Germany’s populist daily newspaper. Unlike Britain’s right-wing tabloids, Bild is relatively nonpartisan but nevertheless opinionated, with an aggressive tabloid style, although it is printed on a broadsheet format.

Reichelt, 40, a former war correspondent who became editor-in-chief of Bild in 2017, also frequently wrote opinion pieces. He had lately railed against what he said was the German government’s mismanagement of the pandemic crisis.

Axel Springer, Bild’s parent company, is one of Europe’s most prominent media firms. Springer said in a statement that the investigation involving Reichelt would include “an evaluation of the credibility and integrity of all parties involved. Prejudgments based on rumours are unacceptable for the Axel Springer corporate culture.”