Prince Charles’ visit to HMS Queen Elizabeth was cancelled at the last minute by the Ministry of Defence – scuppering what was meant to be highlight of the final day of the royals’ Middle East tour.

The trip was pulled after one of the ship’s F35 stealth planes crashed on Wednesday.

Hours before he was due on board, Clarence House said: “For operational reasons, the visit to HMS Queen Elizabeth has been cancelled.” Despite that disappointment, the prince was met with a loud round of applause at the Greek campus in the middle of Cairo on Friday.

Groups of business figures and young entrepreneurs jostled for a few moments of face time, the prince keen to tell anyone he could about his sustainable markets initiative, his big push to get businesses and governments working closer together to tackle the climate crisis.

In Egypt, the crowds have certainly come out to see them, partly I suspect because so many roads in Cairo and Alexandria were closed, the convoy and security set up considerable.

But the first major overseas tour since the pandemic started was always going to attract more attention than other visits, and Prince Charles and Camilla have ticked all the boxes that Number 10 and the Foreign Office would have expected. 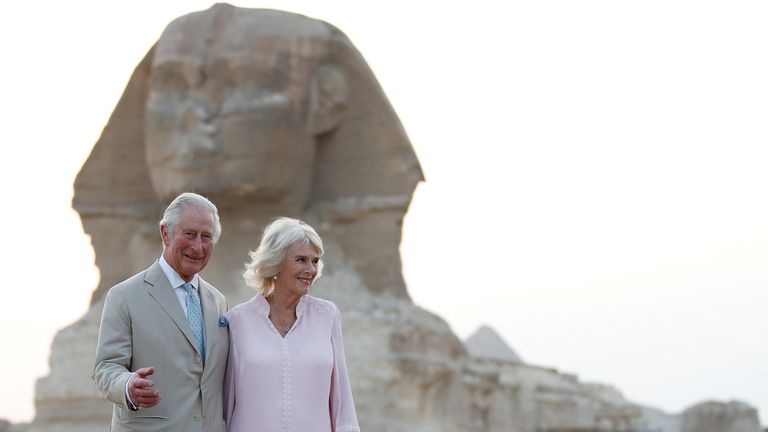 It is after all the government who requested that they visit Egypt and Jordan. There has been plenty of discussion about shared interests, close working ties and friendship.

There have been the big picture moments at the site on the banks of the River Jordan where it’s believed Jesus Christ was baptised, and the pyramids and Sphinx in Giza. The prince has been able to speak at length about his primary passions of how we tackle the climate crisis and encouraging interfaith dialogue; whether he raised the matter of human rights with Egypt’s controversial President Sisi is less clear.

Producing fewer column inches, the Duchess of Cornwall has also done her fair share of quiet diplomatic work and again focused on championing women and children’s rights, including visiting projects run by the British Council.

It was quite something to see Camilla walk up around six narrow flights of stairs in a run-down apartment block in the middle of one of Cairo’s biggest slums and meet women on the roof who are being helped to find employment.

As hard as the palace plan these tours, there are of course always things that don’t quite turn out as expected. The Queen being unwell has also brought an added focus to the trip and her heir – although he told me this week that she was “alright”. And back home there have also been headlines referencing the prince’s charitable foundation. Another story that has already overshadowed other engagements back home.

Prince Charles and Camilla continue to smile their way through it.

They were swamped by crowds and cameras as they left the famous bibliotheca in Alexandria. Over the years the prince has developed very thick skin, and one thing is never in doubt, he’s always known what is expected and what the future holds.