London: More than half the population would be given a booster shot of the COVID-19 vaccine at the same time as the winter flu jab under world-first plans being drawn up in Britain.

In a development which may eventually be replicated by other countries, health authorities revealed they had started work on a campaign to offer a third dose from September for those most at risk from the disease. 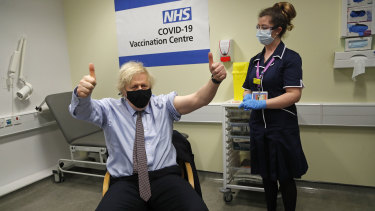 The second phase would include all adults aged over 50, everyone aged 16 to 49 with health conditions that put them at greater risk of infection, and adult household contacts of the immunosuppressed.

The government said the booster campaign would take place alongside the annual flu vaccination program. The pandemic saw a major drop in influenza cases in the UK but officials worry that will not last and the coming winter flu season could be severe.

“Fewer or no restrictions will mean that other respiratory viruses, particularly flu, will make a comeback and quite possibly be an additional problem this winter, so we will need to ensure protection against flu as well as maintaining protection against COVID-19.”

While some other countries, particularly in Europe, have floated the idea of a third dose, the UK is the first to release detailed draft plans on how it would be rolled out.

Scientists behind the Oxford-AstraZeneca vaccine have been working on a booster jab for several months to respond to variants.

A government-backed study is also testing how a third dose of seven different vaccines will affect patients’ immune responses.

The nearly 3000 trial participants will have blood samples taken to measure their immune responses 28, 84, 308 and 365 days after getting the booster.

The trial will report initial results in time for a booster campaign to begin in September.

Experts want to examine the durability of vaccines beyond six months, the immune response provoked by a third vaccination, and the impact of using the same of alternative COVID-19 vaccines for the booster jab from the ones people were given for their first and second doses.

The UK is on course for 90 per cent of all adults to have received at least one vaccine dose by the middle of July. Nearly two-thirds of all adults (62.4 per cent) have now been given their second dose.

Some 26,000 new cases were reported on Wednesday but the vaccination campaign has slashed the number being admitted to hospital or dying. Fourteen new deaths were recorded on Wednesday.

The last time close to 26,000 new cases were reported amid a new wave was on December 19. That day, 534 deaths were recorded.