Singapore: China’s defence ministry has labelled the Australian government’s warnings on the threat of war over Taiwan as irresponsible and accused it of inciting confrontation over the democratic island.

The comments from defence ministry spokesman and senior colonel Tan Kefei in Beijing on Thursday are the first official response from the Chinese military to a flurry of concerns from Australian leaders in April and May. 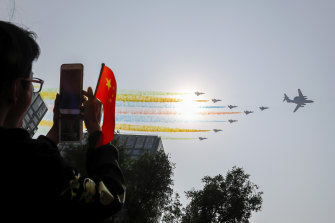 Chinese military planes fly in formation during a parade in Beijing to commemorate the 70th anniversary of the founding of communist China.Credit:AP

“We express strong dissatisfaction and resolute opposition to the recent provocative actions on Taiwan-related issues by Australia,” said Tan.

“Recently, Australia has taken a series of provocative actions and some people have even incited confrontation and exaggerated the threat of war on Taiwan-related issues. Such actions are incredibly irresponsible.”

Home Affairs secretary Michael Pezzulo in April told his staff that Australia must search for peace but warned “the drums of war” are beating in comments widely interpreted as being directed at the situation in the Taiwan Strait. The remarks were followed by Defence Minister Peter Dutton who said the possibility of conflict should not be discounted.

China has sent hundreds of warplanes over the area since January, escalating its military sorties to intimidate and deplete resources of the Taiwanese defence force. On April 12, 25 Chinese warplanes were sent towards the strait alone, according to figures from Taiwan’s Ministry of National Defence.

China views its neighbour as a renegade province. Australia has acknowledged China’s position on Taiwan since diplomatic ties were established with the Chinese Communist Party in 1972 under Australia’s “One-China policy” but has not recognised or endorsed China’s claim.

The position is consistent with much of the West, which has relied on maintaining this ambiguity to reduce the risk of conflict over the self-governed island, a key liberal enclave and a vital strategic post in the Indo-Pacific.

But Chinese President Xi Jinping’s ascendant nationalism and China’s growing military strength have fuelled concerns that the deadline could be accelerated to within the next decade.

Taiwan’s Foreign Minister Joseph Wu on Thursday said Taiwan was a front-line state guarding against the expansion of authoritarianism and that debates about strategic ambiguity needed to be bolstered by concrete military support.

“I think Beijing has been preparing for war against Taiwan, and that is what we have been seeing. They are preparing for it,” he told US network PBS.

“The full picture is that we are seeing the United States getting more and more serious about the situation in this part of the world. We need US support. And the US has shown its support to Taiwan. I think this is much better than getting into the debate of strategic ambiguity or strategic clarity.”

The US has also raised concerns about a key strategic port in northern Australia which could become a key piece of infrastructure in any conflict. The Port of Darwin provides the closest route to the South China Sea from US and Australian training bases in the Northern Territory.

It was leased for 99 years to Chinese multinational Landbridge in 2015 and was not objected to by Australia’s Department of Defence but that deal is now under review by the Morrison government.

Any move to terminate the lease is likely to further exacerbate tensions between Canberra and Beijing as relations fall to historic lows.

Landbridge has threatened to take legal action if the government terminates the lease, arguing the commercial deal does not involve any security issues.