Melitopol’s exiled mayor, Ivan Fedorov, said Ukrainian troops had managed to take the base, which was occupied on the second day of Russia’s invasion, “out of action”. A Moscow-installed official confirmed strikes had hit the city, in the southeastern Zaporizhia region, on Sunday afternoon.

Mr Fedorov, who is currently on Kyiv-controlled territory, said on Telegram: “At 3 o’clock and 5 o’clock, there were over 30 strikes on a single military base.”

The military base, the mayor later said on television, was being used to store ammunition for heavy Russian weapons.

He said: “They stored and handled the logistics of ammunition for heavy weapons at this base.”

Intelligence indicated five Russian helicopters and 10 Russian fighter jets regularly took off from the base.

Russia’s RIA news agency reported that Ukraine had hit the Aviamistechko area of Melitopol where the city’s airport is located, but did not specify what had been hit.

Footage circulating on social media suggests the Melitopol Air Base was still burning on Monday afternoon. 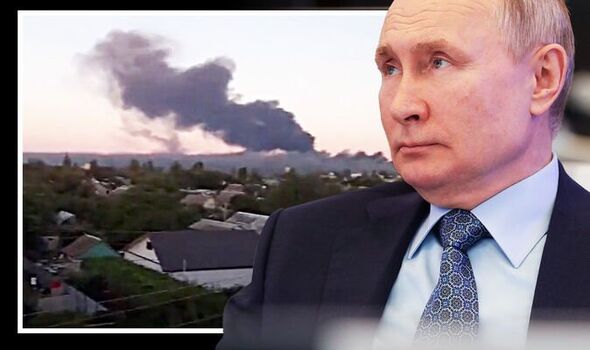 Other resistance activity caused a Russian armoured train carrying ammunition to derail on Saturday near Melitopol.

Mr Fedorov said: “At the moment, the occupiers are trying to make provocations [claiming] that there was shelling of peaceful areas, the civilian population was affected, and the city infrastructure was destroyed.

“This did not happen!

“The Ukrainian Armed Forces are doing all to return peaceful life and Ukrainian statehood to Melitopol. All that the occupiers can do is flee from our city.”

The mayor also said that a large flow of Melitopol’s residents for evacuation is expected.

He wrote: “Our task is to help accommodate people who want to move to Zaporizhia.” 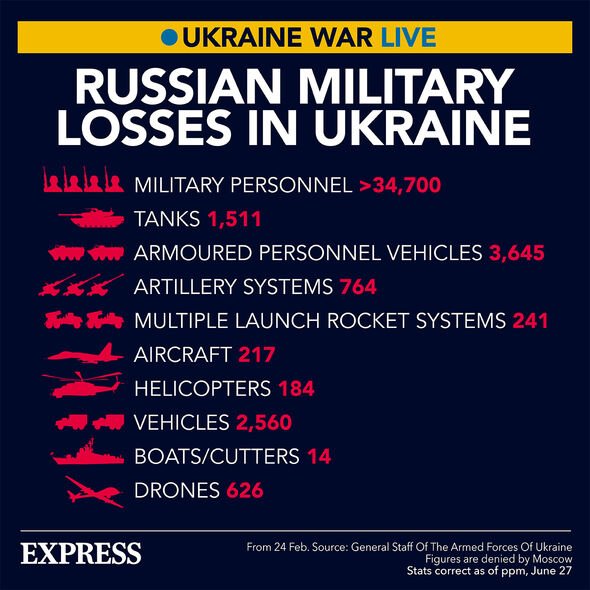 The reported losses add to figures released late last month that show the Russian army has lost around 35,000 troops, 1,500 tanks and 217 planes since the war began in late February.

The data, shared by Ukraine’s Centre for Strategic Communications and Information Security, which sits under the country’s Ministry of Culture and Information Policy, is currently the closest representation of the state of Moscow’s military.

However, information on casualties and hardware losses cannot be verified.

According to the update, published on June 24, other losses among Russia’s equipment include 3,645 armoured Protected Vehicles (APV), 75 artillery systems, 241 Multiple Launch Rocket Systems (MLRS) and 2,560 vehicles.

The Kremlin has only given an official toll of troops killed on two occasions, the last on March 25, with a figure of 1,351 which experts described at the time as way too low. 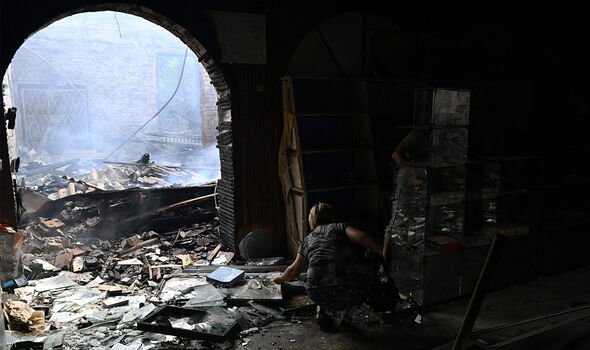 Kyiv reveals no such statistics for its own forces or hardware.

However, President Volodymyr Zelensky said on June 1 his army was losing up to 100 soldiers per day, while some 500 were being wounded.

Last weekend’s two Ukrainian successes in Zaporizhia came as Vladimir Putin declared victory in the eastern region of Luhansk and told Russian troops to rest and “increase their combat capabilities”.

Ukraine’s military command confirmed on Sunday evening that its troops had been forced to pull back from the city of Lysychansk, their last remaining stronghold in the province.

Serhiy Haidai, the governor of Luhansk, said he expected the Donetsk cities of Sloviansk and Bakhmut to come under heavy attack as Russia attempts to take full control of Donbas.

The governor told Reuters: “The loss of the Luhansk region is painful because it is the territory of Ukraine.

“For me personally, this is special. This is the homeland where I was born and I am also the head of the region.”

He stressed, however, that even though the withdrawal from Lysychansk “hurts a lot … it’s not losing the war”.

Mr Haidai said the retreat from Lysychansk had been “centralised” and orderly, and had been carried out to save the lives of Ukrainian soldiers who were in danger of being surrounded.

He said: “[Russian forces] will not transfer 100 percent of their troops to some front because they need to hold the line.

“If they leave their positions then ours can carry out some kind of counteroffensive.

“Still, for them, goal number one is the Donetsk region.

“Sloviansk and Bakhmut will come under attack – Bakhmut has already started being shelled very hard.”