Kyiv: Russian President Vladimir Putin has signed treaties for an illegal annexation of occupied Ukrainian territory in a sharp escalation of his seven-month invasion of Ukraine. Its leader immediately countered with a surprise application to join the NATO military alliance.

Putin’s land-grab on Friday (Russia time) and President Volodymyr Zelensky’s signing of what he said is an “accelerated” NATO membership application sent the two leaders speeding even faster on a collision course that is cranking up fears of a full-blown conflict between Russia and the West. 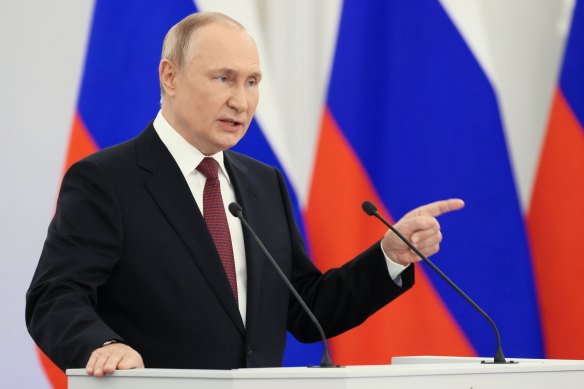 Russian President Vladimir Putin gestures during a ceremony to sign the treaties for four regions of Ukraine to join Russia.Credit:AP

Putin vowed to protect newly annexed regions of Ukraine by “all available means”, a nuclear-backed threat at a Kremlin signing ceremony where he also railed at the West.

Zelensky then held a signing ceremony of his own, releasing video of him putting pen to papers that he said were a formal NATO membership request.

Putin has repeatedly made clear that any prospect of Ukraine joining the world’s largest military alliance is one of his red lines and it was among the justifications he has cited for his invasion.

In his speech, Putin urged Ukraine to sit down for peace talks but immediately insisted he won’t discuss handing back occupied regions — keeping him on a collision course with the Ukrainian government and its Western backers that have rejected his land-grab.

In a Kremlin ceremony at the ornate St George’s Hall to herald the annexation of the occupied parts of Ukraine, Putin accused the West of fuelling the hostilities as part of what he said is a plan to turn Russia into a “colony” and a “crowds of slaves”. The hardening of his position, in the conflict that has killed and wounded tens of thousands of people, further cranked up tensions, already at levels unseen since the Cold War.

The European Union responded to Putin’s latest step with a joint statement rejecting and condemning “the illegal annexation” of the four regions: Donetsk, Luhansk, Kherson and Zaporizhzhia.

The EU’s 27 member states said they will never recognise the illegal referendums that Russia organised “as a pretext for this further violation of Ukraine’s independence, sovereignty and territorial integrity”.

Ukraine vowed to continue fighting, and Zelensky announced the “accelerated” NATO application, although it wasn’t immediately clear what that would mean, since it requires the unanimous support of the alliance’s members. 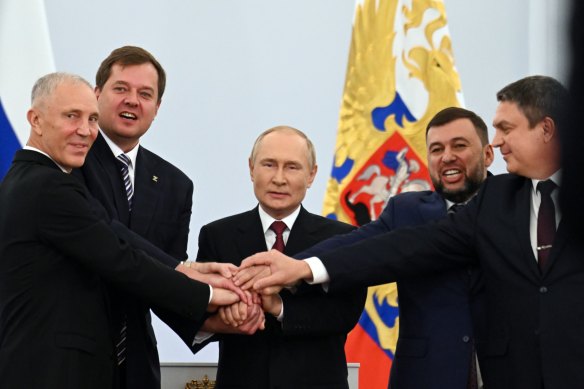 “De facto, we have already proven compatibility with alliance standards. They are real for Ukraine – real on the battlefield and in all aspects of our interaction,” Zelensky said. “We trust each other, we help each other, and we protect each other. This is the alliance.”

The Kremlin ceremony came three days after the completion in occupied regions of Moscow-orchestrated “referendums” on joining Russia that were dismissed by Kyiv and the West as a bare-faced land grab held at gunpoint and based on lies.

But Putin, in a fiery speech at the ceremony, insisted that Ukraine must treat the Kremlin-managed votes “with respect.”

After the signing ceremony of treaties to join Russia, Moscow-installed leaders of the occupied regions gathered around Putin and they all linked hands, before then joining chants of “Russia! Russia!” with the audience.

Putin also railed at the West, cutting an angry figure as he accused the United States and its allies of seeking to destroy Russia. He said the West acted “as a parasite” and used its financial and technological strength “to rob the entire world”.

He portrayed Russia as being on a historical mission to reclaim its post-Soviet great power status and counter Western domination that he said is collapsing.

“History has called us to a battlefield to fight for our people, for the grand historic Russia, for future generations,” he said.

The separatist Donetsk and Luhansk regions in eastern Ukraine have been backed by Moscow since declaring independence in 2014, weeks after the annexation of Ukraine’s Crimean Peninsula. The southern Kherson region and part of neighbouring Zaporizhzhia were captured by Russia soon after Putin sent troops into Ukraine on February 24.

Both houses of the Kremlin-controlled Russian parliament will meet next week to rubber-stamp the treaties for the regions to join Russia, sending them to Putin for his approval.

Putin and his lieutenants have bluntly warned Ukraine against pressing an offensive to reclaim the regions, saying Russia would view it as an act of aggression – threats that Moscow can back up with the world’s largest arsenal of nuclear warheads.

The Kremlin-organised votes in Ukraine were an attempt by Putin to avoid more defeats on the battlefields that could threaten his 22-year rule. By setting Russia’s gains in stone, at least on paper, Putin seemingly hopes to scare Ukraine and its Western backers with the prospect of an increasingly escalatory conflict unless they back down — which they show no signs of doing.

Russia controls most of the Luhansk and Kherson regions, about 60 per cent of the Donetsk region and a large chunk of the Zaporizhzhia region where it took control of Europe’s largest nuclear power plant.