Qatar has confirmed it is working with the Taliban to reopen Kabul’s airport ‘as soon as possible’.

‘Hopefully in the next few days we will hear some good news,’ Qatari Foreign Minister Sheikh Mohammed bin Abdulrahman al-Thani said on Thursday.

‘It’s very important… that the Taliban demonstrate their commitment to provide safe passage and freedom of movement for the people of Afghanistan,’ he told a news joint conference with his British counterpart Dominic Raab in Doha.

Sheikh Mohammed said Qatar is working with the Taliban ‘to identify what are the gaps and the risks of having the airport back up and running.’

Kabul Hamid Karzai International Airport airport has been closed to normal traffic since August 16, the day after the Taliban took control of the city.

Military flights and evacuations continued until August 31, when U.S. forces quit the country and left the runway without air traffic controllers.

Sheikh Mohammed’s comments came after a Qatari technical team flew into Kabul on Wednesday to discuss reopening the airport, the first plane to land there since the evacuations. 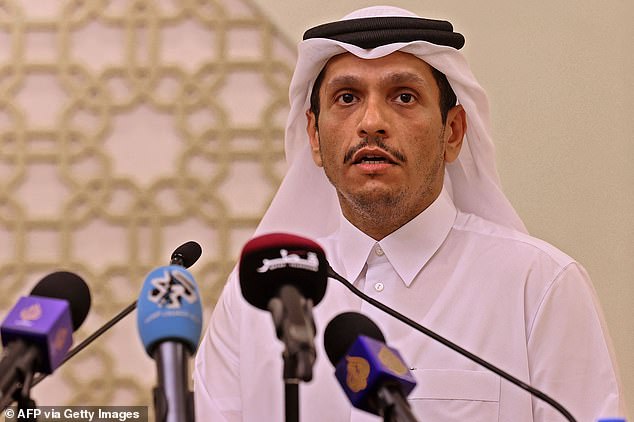 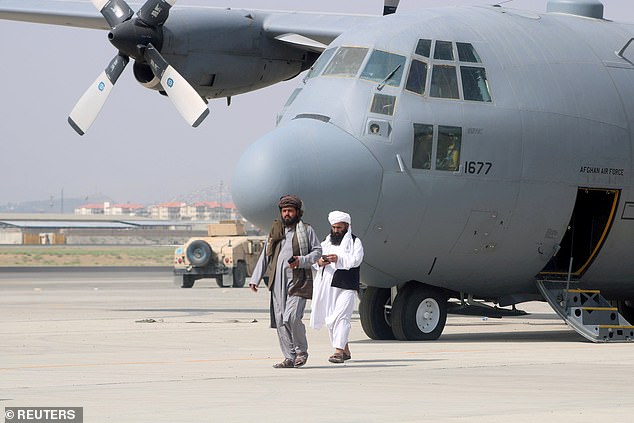 Kabul’s international airport has been closed to normal traffic since August 16, the day after the Taliban took control of Kabul. Military flights and evacuations continued until August 31, when U.S. forces quit the country and left the runway without air traffic controllers. Pictured: Taliban walk in front of a military airplane at Kabul’s airport the day after the U.S. withdrawal 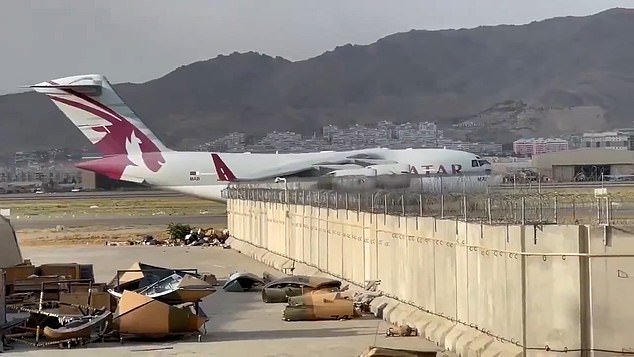 Sheikh Mohammed’s comments came after a Qatari technical team flew into Kabul on Wednesday to discuss reopening the airport, the first plane (pictured) to land there since the evacuations

Qatar, which has housed the base for the Taliban’s office since 2012, is believed to have a good working relationship with the militant group.

The office was set up at the request of US officials to enable negotiations towards the country’s eventual withdrawal from Afghanistan, which was completed on Monday.

More than 123,000 foreign nationals and Afghans fled the country in a complicated airlift operation after the Taliban seized Kabul on August 15, but many more are desperate to depart.

At Thursday’s news conference, Sheikh Mohammed also urged the Taliban to live up to its promise to allow Afghans and foreigners to leave the country freely once the airport reopens.

The future of the airport is key not only to potentially enabling people to leave the country, but also in allowing aid to be brought in.

Qatar sent its experts after a request from the Taliban, a source said on Wednesday.

Their arrival came amid a humanitarian crisis in Afghanistan that has seen thousands of people stream across land borders amid doubts that the Taliban will keep their word and allow those with western travel documents to leave once flights restart. 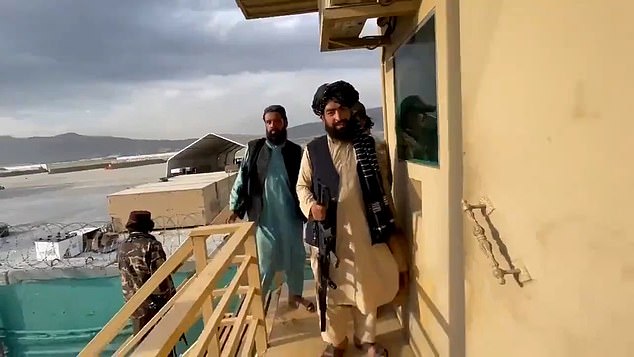 The flight is carrying a technical team which the Taliban (pictured) requested to help them reopen the airstrip – allowing aid into the country, and refugees out

The source on Wednesday told AFP news agency that ‘no final agreement has been reached regarding providing technical assistance’ the Qatari team would provide.

‘Talks are still ongoing at the level of security and operation,’ the source said.

Hundreds of those looking to leave Kabul are thought to be citizens of western countries who were left behind in the rush to withdraw, while tens of thousands more are Afghans who were promised sanctuary in return for helping US, UK and NATO forces.

Afghanistan is facing several immediate and rapidly worsening crises following the Taliban’s rapid takeover. The crises show no sign of abating as the Islamists have not yet formed a government – caught off-guard by the speed of their own take-over.

Cash reserves are running desperately low, food shortages have seen prices soar, skilled workers are fleeing and the economy is on the brink of collapse.

Medical supplies are also running low, the country’s wealth reserves are stashed overseas and subject to an asset freeze, aid payments have all-but dried up, and foreign exchanges have shut down – meaning people cannot wire funds from abroad.

The Islamist militia has focused on keeping banks, hospitals and government machinery running even as thousands of people crossed the borders into Iran, Pakistan and central Asian states.

At Torkham, a border crossing with Pakistan just east of the Khyber Pass, a Pakistani official on Wednesday described ‘a large number of people are waiting on the Afghanistan side for the opening of the gate.’

Thousands had also gathered at the Islam Qala post on the border with Iran.

‘I felt that being among Iranian security forces brought some kind of relaxation for Afghans as they entered Iran, compared with the past,’ said one Afghan among a group of eight that crossed over.

The Taliban is talking with Qatar and Turkey over how to run Kabul’s airport, French Foreign Minister Jean-Yves Le Drian said, but it could take days or weeks to finalise those negotiations.

Uzbekistan’s land border with northern Afghanistan remained closed, but its government said it would assist Afghans in transit to Germany by air, once flights resume.

In a resolution on Monday, the U.N. Security Council urged the Taliban to permit safe passage for those seeking to leave, but did not mention the creation of a safe zone, a step backed by France and others.

The Taliban have declared an amnesty for all Afghans who worked with foreign forces during the war, which ousted them from power in 2001 for their refusal to hand over al Qaeda leader Osama bin Laden after the September 11 attacks on the United States.

Taliban leaders have also called on Afghans to return home and help rebuild the country, while promising to protect human rights, in an apparent bid to present a more moderate face than their first government, which enforced a strict interpretation of Sharia Law.

The militia made similar promises upon seizing power in 1996, only to publicly hang a former president, ban women from education and employment, enforce strict dress codes and adopt a punitive approach to the people of Kabul.

One woman said she saw Taliban fighters beating women with sticks outside a bank in the Afghan capital on Tuesday.

‘It’s the first time I’ve seen something like that and it really frightened me,’ the 22-year-old said, speaking on condition of anonymity. 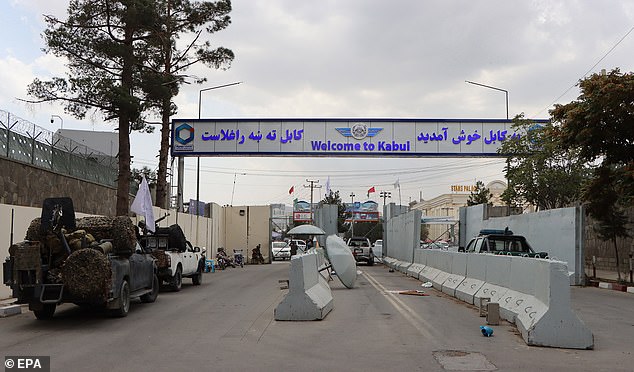 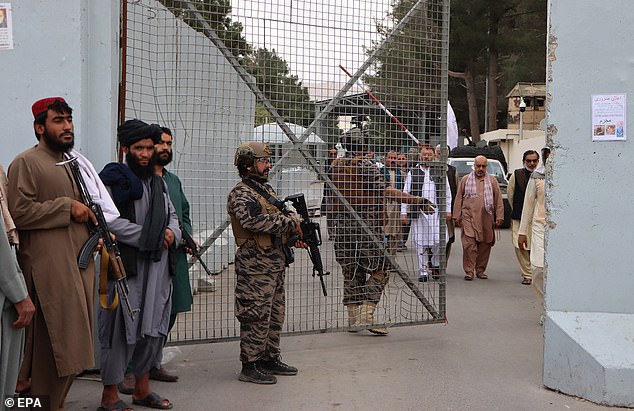 Taliban guards are pictured outside the airstrip, where only members of the Islamist group are currently allowed to go – with no flights taking off

The Taliban have yet to name a new government or reveal how they intend to govern, unlike in 1996, when a leadership council was formed within hours of taking the capital.

The foreign minister of neighbouring Pakistan, which has close ties to the Taliban, said on Tuesday he expected Afghanistan to have a new ‘consensus government’ within days.

In the absence of a government in Kabul, Britain and India held separate talks with Taliban officials in Doha amid fears that up to half a million Afghans could flee.

Washington said it would use its leverage, including access to the global marketplace, over the Taliban as it seeks to get the remaining Americans and allies out of Afghanistan after its military withdrew.

High on victory and back in power, some Taliban leaders mocked the United States.

‘Your power is gone, your gold is gone,’ Anas Haqqani, who has emerged as one of the group’s most prominent leaders, said on Twitter.

Haqqani posted a photograph of himself holding discarded prison shackles on Wednesday as he toured Bagram prison, where he spent years kept in solitary confinement by U.S. forces.

Still, Afghanistan desperately needs money, and the Taliban are unlikely to get swift access to the roughly $10 billion in assets mostly held abroad by Afghanistan’s central bank.

‘If the international community wants to prevent an economic collapse, one way would be to allow Afghanistan to gain limited and monitored access to its reserves,’ Shah Mehrabi, an economics professor at Montgomery College in Maryland who is on the board of the central bank, told Reuters. 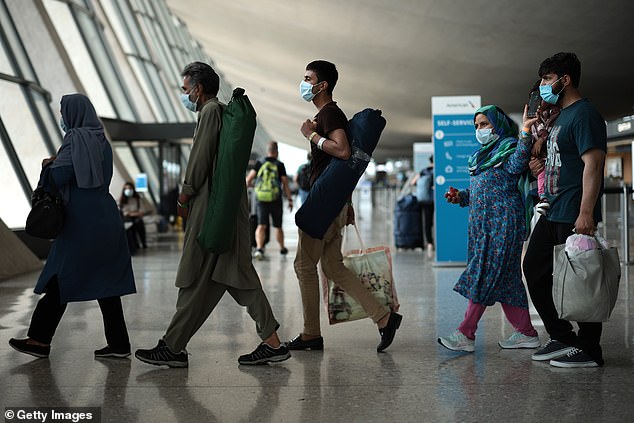 Afghan evacuees – some of the last allowed out of the country – arrive in Washington DC on Tuesday, a day after the last American forces departed

Long queues formed at banks in Kabul on Wednesday as people tried to withdraw savings.

The Taliban also said it had surrounded the only remaining province resisting its rule and it called on the fighters there to negotiate a settlement with it.

Several thousand members of local militias and remnants of army and special forces units have been holding in mountainous Panjshir under the leadership of Ahmad Massoud.

In a recorded speech, senior Taliban leader Amir Khan Motaqi called on them to put down their weapons.

‘The Islamic Emirate of Afghanistan is home for all Afghans,’ he said.

Motaqi reminded the anti-Taliban forces that NATO and U.S. forces had been unable to defeat the Taliban.

‘But we are still trying to ensure that there is no war and that the issue in Panjshir is resolved calmly and peacefully,’ he said.