We ARE amused! Queen is all smiles as she is driven around her Sandringham estate by Range Rover after flying in for the weekend from Windsor Castle where monarch, 95, had been recuperating from hospital stay

The Queen was seen smiling in the autumn sunshine today as she was photographed being driven through Sandringham in a Range Rover after heading to her Norfolk estate for the weekend.

The 95-year-old monarch flew to the country estate by helicopter yesterday from Windsor Castle, where she has been resting after her overnight stay in hospital last month as she continues her recuperation.

The Queen, who was wearing a headscarf and sunglasses, was in the A-Bio Sdv8 diesel vehicle travelling towards Wood Farm on the estate, which she used to visit annually with Prince Philip around this time of year.

The head of state is expected to spend the weekend at Sandringham while she has some time off after doctors advised her to cancel all official visits for a fortnight amid her determination to be fit for Remembrance Sunday.

Her Majesty last week pulled out of a planned visit to the COP26 climate change conference in Glasgow and instead recorded a video message from Windsor last Friday, which was played to world leaders on Monday.

And her 105-mile flight to Sandringham for the weekend comes after insiders said the Queen was determined to host her family at the estate for Christmas this year after the pandemic forced them to scrap last year’s event.

Buckingham Palace refused to comment to MailOnline on her trip, and a source said it was a ‘private matter’. 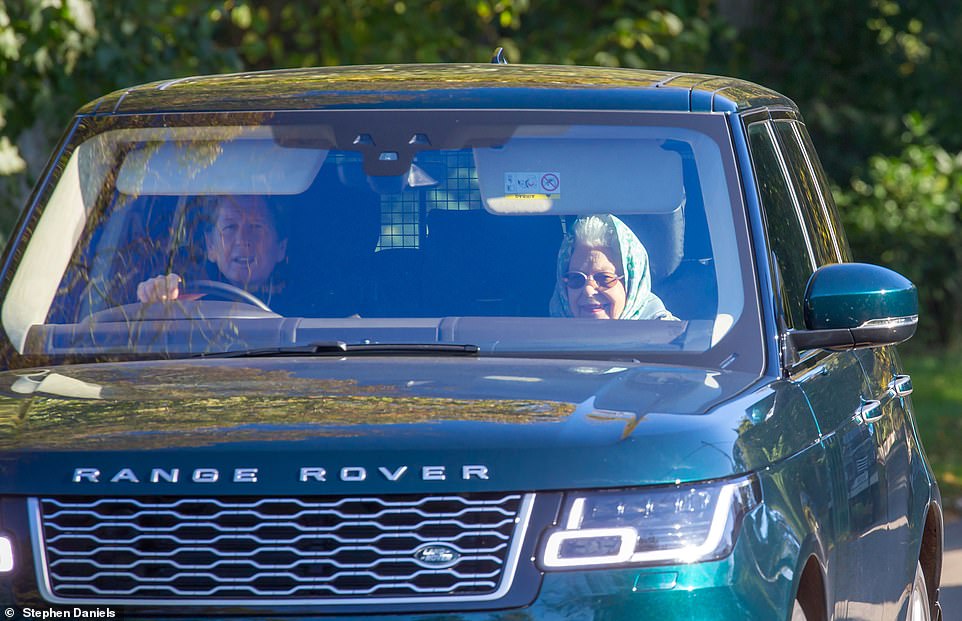 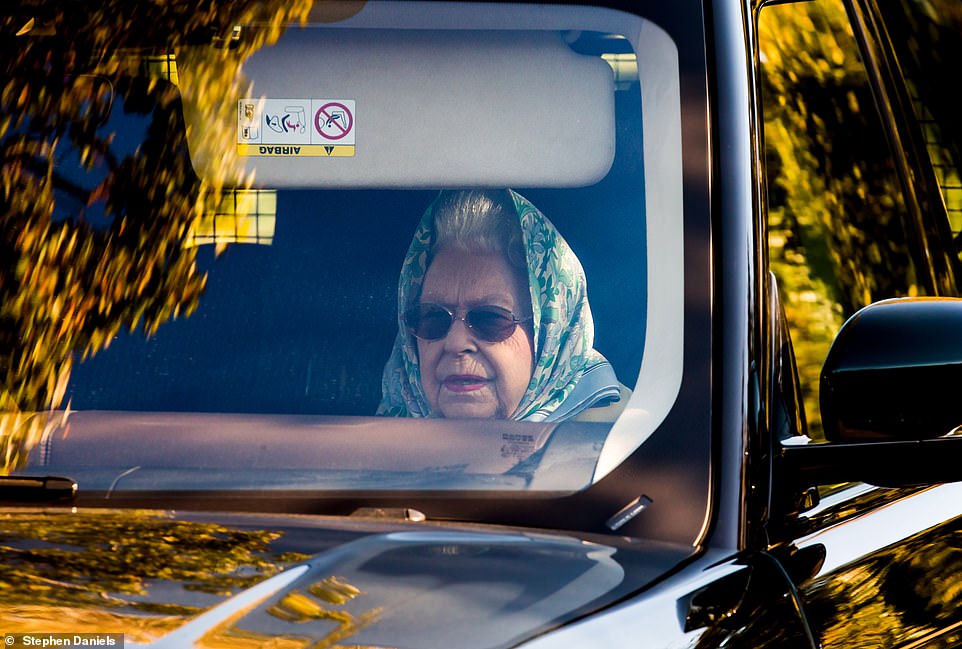 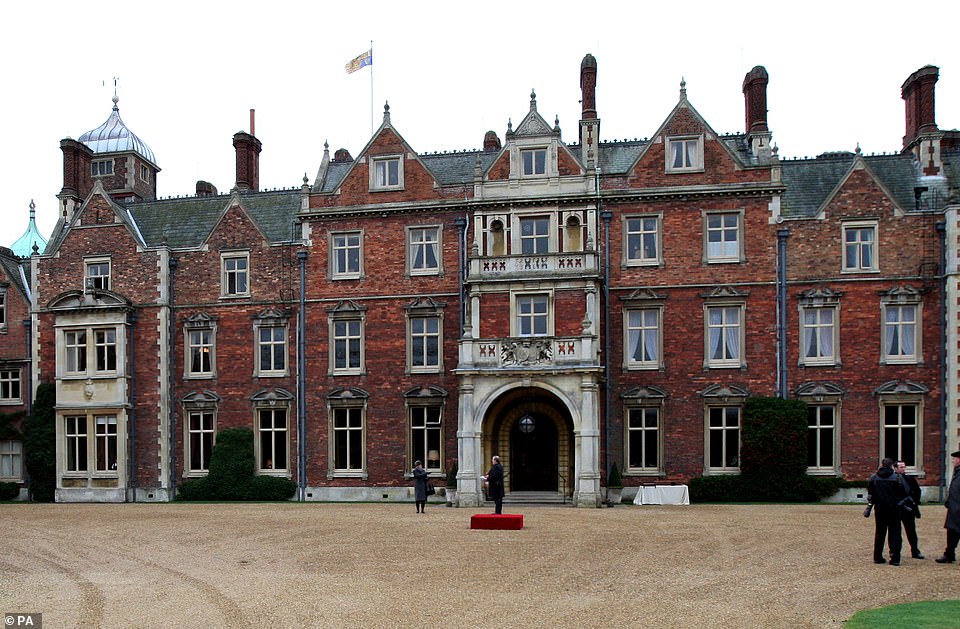 The Queen and Prince Philip used to escape to Sandringham every year around the time of Halloween so they could enjoy some quality time together at Wood Farm on the estate.

And although her ‘dear late husband’ – as she referred to him this week – died in April, the Queen has decided to honour those cherished memories together by going back to the estate this week.

The Queen maintained her typically busy schedule in October up until she was told to rest by doctors and cancelled a trip to Northern Ireland around two weeks ago. Here is what the 95-year-old monarch has been up to since the start of October:

Wood Farm was where Philip, her husband of 73 years who passed away aged 99, largely spent the last few years of his life following his retirement.

A countryman at heart, he loved Sandringham and relished the relative simplicity of Wood Farm, where his only concession to modernisation had been to put in a new kitchen. If not for the pandemic, which saw him move to Windsor to be with the Queen, it is likely to have been where he would have spent his last days.

A royal source told Mirror Online yesterday: ‘The Queen had been hoping she would still be able to spend the weekend at Sandringham and was delighted her doctors gave her the all clear to travel.

‘Her Majesty is very much looking forward to hosting her family at her Norfolk home for the Christmas holiday and there is much preparation to be done in time to accommodate everyone who has been invited.

‘The Queen has many happy memories of being at Sandringham with the family over Christmas and was in the firm belief that she was far better off being there in person to oversee everything as much as possible.’

The source added that the Queen travelled ‘on the understanding with her doctors that she continues to rest as advised’ after they said last week that she should only take part in ‘light, desk-based’ duties for at least a fortnight.

The Queen and the Duke of Edinburgh last year spent their Christmas alone at Windsor Castle – which made it the first time since 1987 that she did not spend the holiday with her family at Sandringham.

The monarch has vowed to attend the Remembrance Sunday service at the Cenotaph on November 14, even though she will miss the traditional Festival of Remembrance at the Royal Albert Hall the previous day.

The head of state had been due to attend Cop26 where she had hoped to deliver an in-person speech and to host a reception, but was forced to drop out after royal doctors said that she should not travel for any duties.

The Royal Family were instead represented at the conference by Prince Charles, Camilla and the Duke and Duchess of Cambridge.

Last month, the Queen was secretly taken to the private King Edward VII Hospital in London. Royal aides have only said that the trip was for ‘preliminary investigations’ with the exact reason for the trip still unknown.

Speaking last weekend, the Prime Minister said that the Queen was in good spirits when they held their regular weekly audience last Wednesday.

Boris Johnson said: ‘She seems in very good form. She’s been told by her doctors that she’s got to rest and I think we’ve got to respect that and understand that. I think the whole country wishes her well.’

But despite reassurances from Buckingham Palace that she remains in good spirits, public concern is unlikely to be eased at what has been the lengthiest absence from ill health during her reign.

Doctors will reassess the monarch at the end of her recommended fortnight of rest, with it likely that her diary could be affected for some time to come.

The Queen’s eagerness to get out and about as soon as possible will ultimately be overshadowed by what her doctors think is best.

This will leave other senior royals, especially the Prince of Wales, having to attend more engagements on her behalf whenever possible. 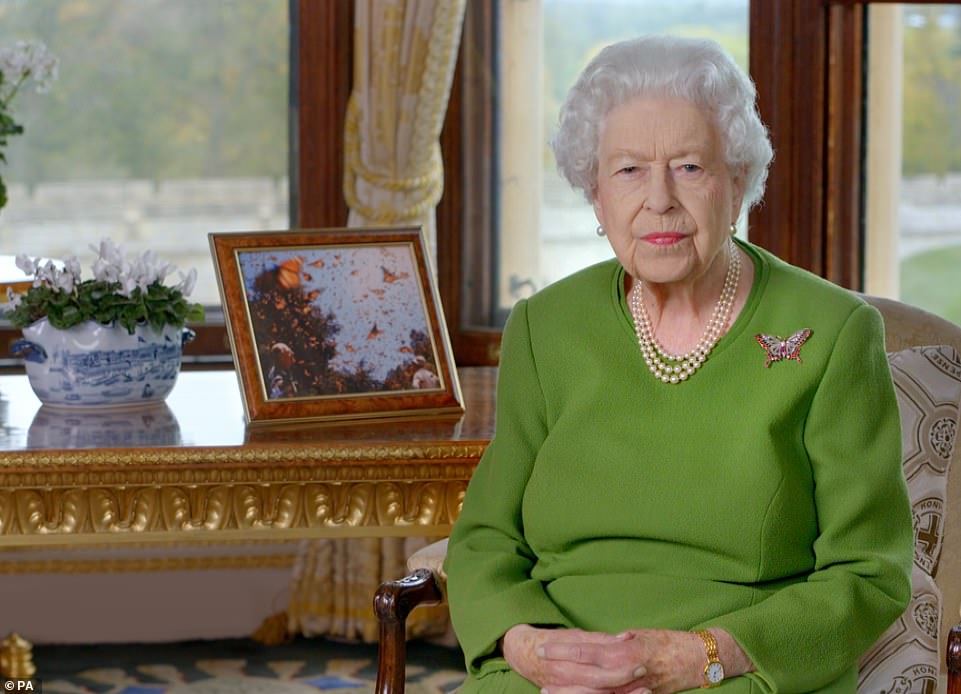 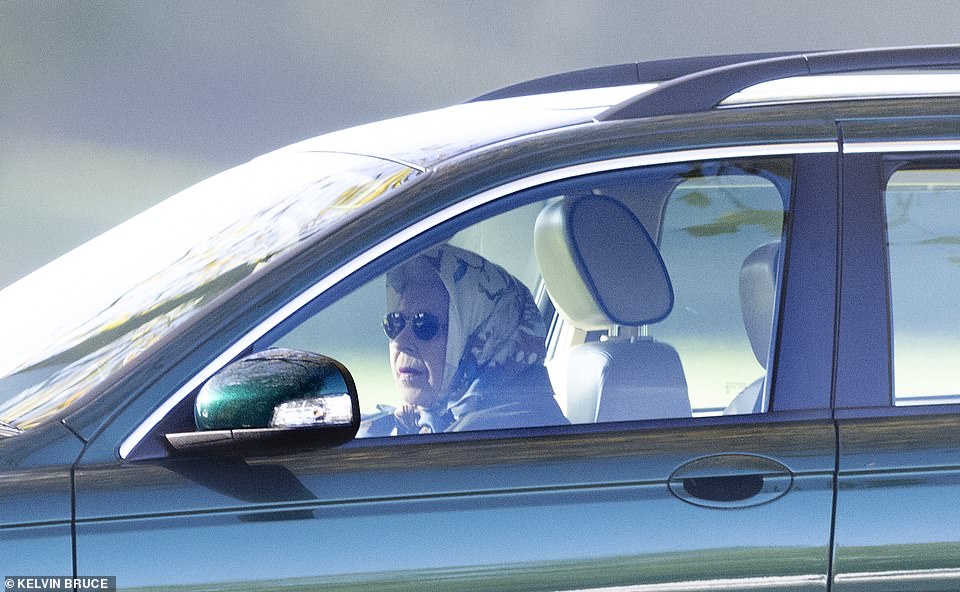 Concerns about the Queen, who has recently been seen using a walking stick at events for the first time, were triggered last month when she cancelled a two-day tour to Northern Ireland.

The decision came just hours before she was due to fly and despite aides saying she stayed at Windsor Castle she was later whisked to hospital for her first overnight stay for eight years.

On Monday the Queen was photographed driving close to Windsor Castle in Berkshire in a green estate car, wearing a signature headscarf and a pair of sunglasses.

During her message to world leaders at Cop26 on Monday, the Queen issued a powerful plea to them over the climate crisis, saying they should put aside division and act now for the sake of ‘our children’.

In her first major intervention on the environment, the monarch said they should ‘rise above the politics’ and show ‘true statesmanship’ on the issue. 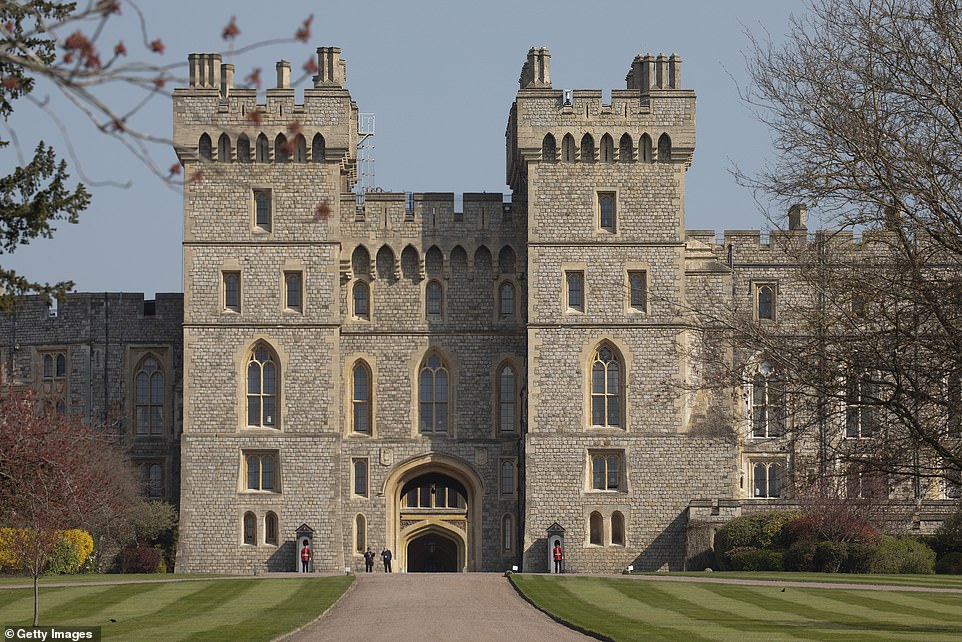 Speaking in a video message – played at a reception marking the first day of the climate summit – the Queen declared: ‘The time for words has now moved to the time for action.’

She included a poignant nod to her advancing years, saying many involved in the Glasgow summit – including herself – would not see the fruits of their actions, adding: ‘None of us will live for ever.’

But she stressed: ‘We are doing this not for ourselves but for our children and our children’s children, and those who will follow in their footsteps.’

She struck a markedly positive note, saying that ‘working side by side’ the world’s leaders could solve ‘the most insurmountable problems’ and ‘triumph over the greatest of adversities’. 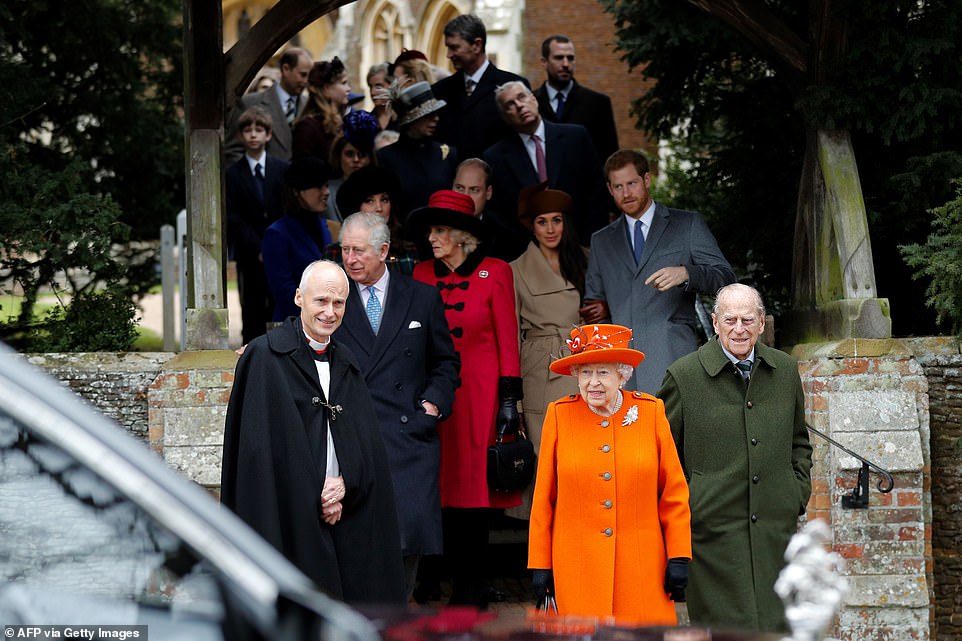 The Queen and the Duke of Edinburgh last year spent their Christmas alone at Windsor Castle – the first time since 1987 that she did not spend the holiday with her family at Sandringham. The Queen and Philip are pictured at Sandringham in 2017 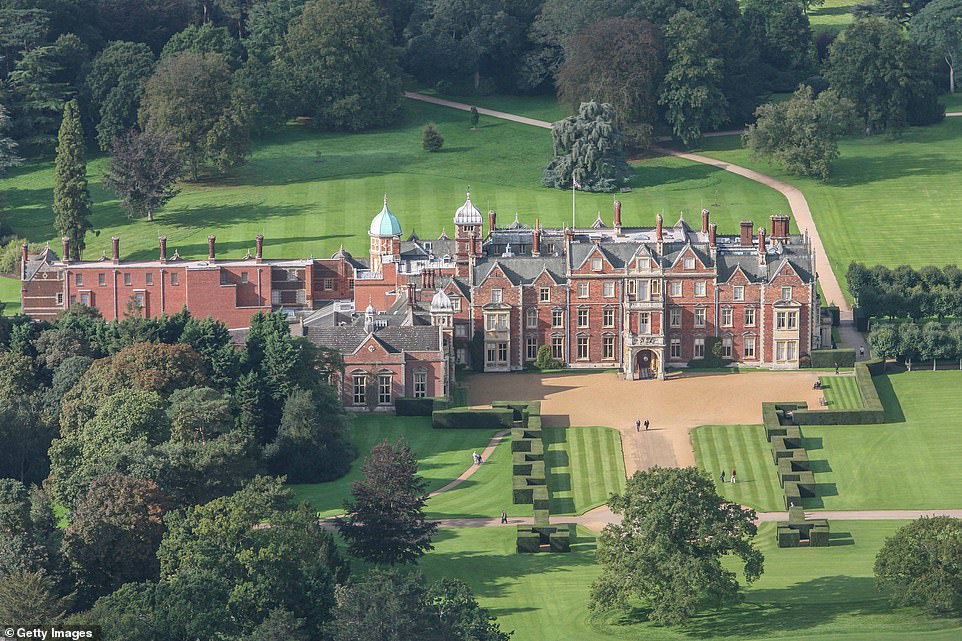 She spoke with unusual candour of her pride in her family and their stance on the environment – from ‘my dear late husband’, the Duke of Edinburgh, to her son the Prince of Wales and grandson the Duke of Cambridge.

She recalled how in 1969 Prince Philip told an academic gathering: ‘If the world pollution situation is not critical at the moment, it is as certain as anything can be that the situation will become increasingly intolerable within a very short time… If we fail to cope with this challenge, all the other problems will pale into insignificance.’

The Queen said: ‘It is a source of great pride to me that the leading role my husband played in encouraging people to protect our fragile planet lives on through the work of our eldest son Charles and his eldest son William. I could not be more proud of them.’

She added she had also ‘drawn great comfort and inspiration from the relentless enthusiasm of people of all ages – especially the young – in calling for everyone to play their part’.

But she emphasised the enormous task ahead, saying: ‘In the coming days, the world has the chance to join in the shared objective of creating a safer, stabler future for our people and for the planet on which we depend.’