Queen’s death certificate shows cause and time of death

London: The Queen’s death certificate has confirmed she died of “old age” at 3.10pm on September 8 – more than three hours before it was announced to the public.

The document, publicly released on Thursday afternoon (London time), has been entered in the National Records of Scotland. 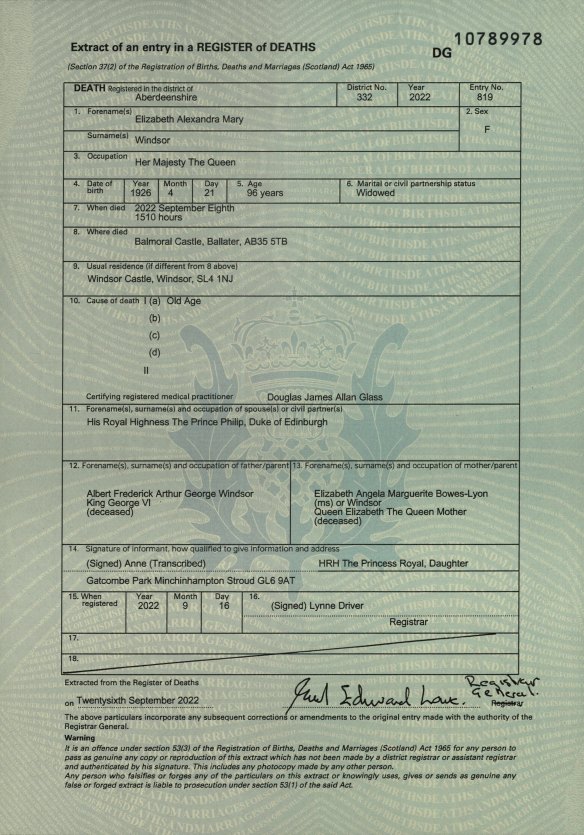 It records the certified registered medical practitioner as Douglas James Allan Glass, a local GP. It was signed by her daughter Anne, the Princess Royal, who was with her in her final hours.

Elizabeth II’s death was registered in Aberdeenshire on September 16, and now a matter of public record.

It confirms that some of the Queen’s close family – including Prince William, the Prince of Wales, and her sons Prince Andrew and Prince Edward were still on their way to Balmoral when she died. 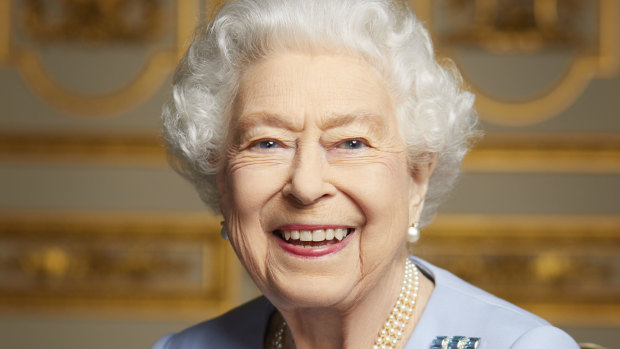 The late Queen Elizabeth was the longest-reigning monarch in British history. Credit:Getty

Her eldest son Charles, who became King following her death, and Princess Anne were at her home in the Scottish highlands when she died.

Buckingham Palace announced her death about 6.30pm, two hours after British Prime Minister Liz Truss was told of the death at 4.30pm.

The palace had issued a dramatic statement around 12.30pm that day, saying the Queen’s doctors were “concerned” for her health and had recommended “she remain under medical supervision”.

In a scrambling effort to farewell the monarch, William, Andrew, Edward and his wife Sophie, the Countess of Wessex took off from RAF Northolt at 2.39pm and landed in Aberdeen at 3.50pm. At 4pm, Prince William drove the family to Balmoral, arriving around 5pm.

Prince Harry, who made his own way to Scotland in the late afternoon, learned of her death as his plane landed in Aberdeen hours later.

While the Queen’s health had severely deteriorated in the past 12 months, several friends who had spent time with her in her final weeks have said she was “sparkling” and “buoyant” in her last days and weeks, despite her frailty.

Among her final tasks was the swearing in of the new prime minister and a 40-minute meeting with Boris Johnson, to formally accept his resignation.

Windsor Castle, which has been closed to the public since the Queen died, reopened for the first time on Thursday. Queues formed before the castle and St George’s Chapel opened at 10am to visitors, who can view the ledger stone inscribed with her name. 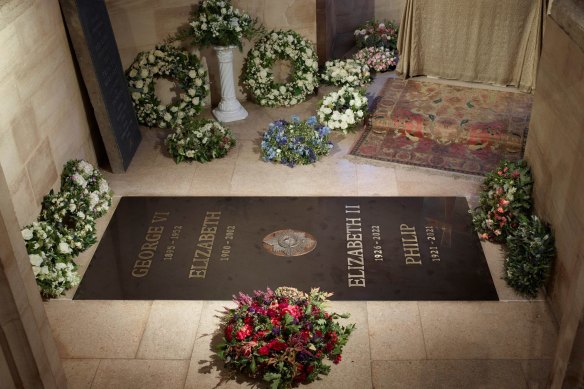 A ledger stone, following the interment of the late Queen Elizabeth II, has been installed at St George’s Chapel, Windsor Castle.Credit:GETTY IMAGES

Following her state funeral at Westminster Abbey, she was laid to rest in King George VI memorial chapel in Windsor. The tiny chapel houses the remains of the late Queen’s father, King George VI, the Queen Mother and Princess Margaret.

A new engraved stone made from Belgian black marble has been installed, bearing the Queen’s name in brass letters.