The Lakers are expected to fire Vogel as soon as Monday, according to ESPN's Adrian Wojnarowski. The report came after their 146-141 overtime win over the Denver Nuggets on Sunday to close out the regular season.

Frank Vogel has coached his final game for the Lakers, a decision that’s expected to be shared with him as soon as Monday, sources tell ESPN. Lakers’ search expected to be lengthy and expansive with no clear initial frontrunner.

Vogel met with reporters after Sunday's game and was asked about the ESPN report.

"I haven't been told s***. I'm going to enjoy tonight's game and celebrate what these young guys did in terms of scratching and clawing and getting back in this game and getting a W. We'll deal with 'tomorrow' tomorrow," Vogel said, via NBA.com's Mark Medina.

The Lakers failed to make the play-in tournament and missed the playoffs entirely two seasons after winning the 2020 NBA championship in Vogel’s first season that culminated in the Orlando bubble.

The 2021-22 season was disastrous from the start. The team acquired Russell Westbrook in a five-team trade in the offseason, shipping out Kentavious Caldwell-Pope, Montrezl Harrell and Kyle Kuzma. The Lakers did not have much cap space to bring in impact players around a core of LeBron James, Anthony Davis and Westbrook.

The team stood pat at the trade deadline, keeping Talen Horton-Tucker, who was frequently in trade discussions, and Kendrick Nunn, who sat out the entire season because of a bone bruise in his knee. Nunn is reportedly expected to exercise his $5.2 million player option for next season. 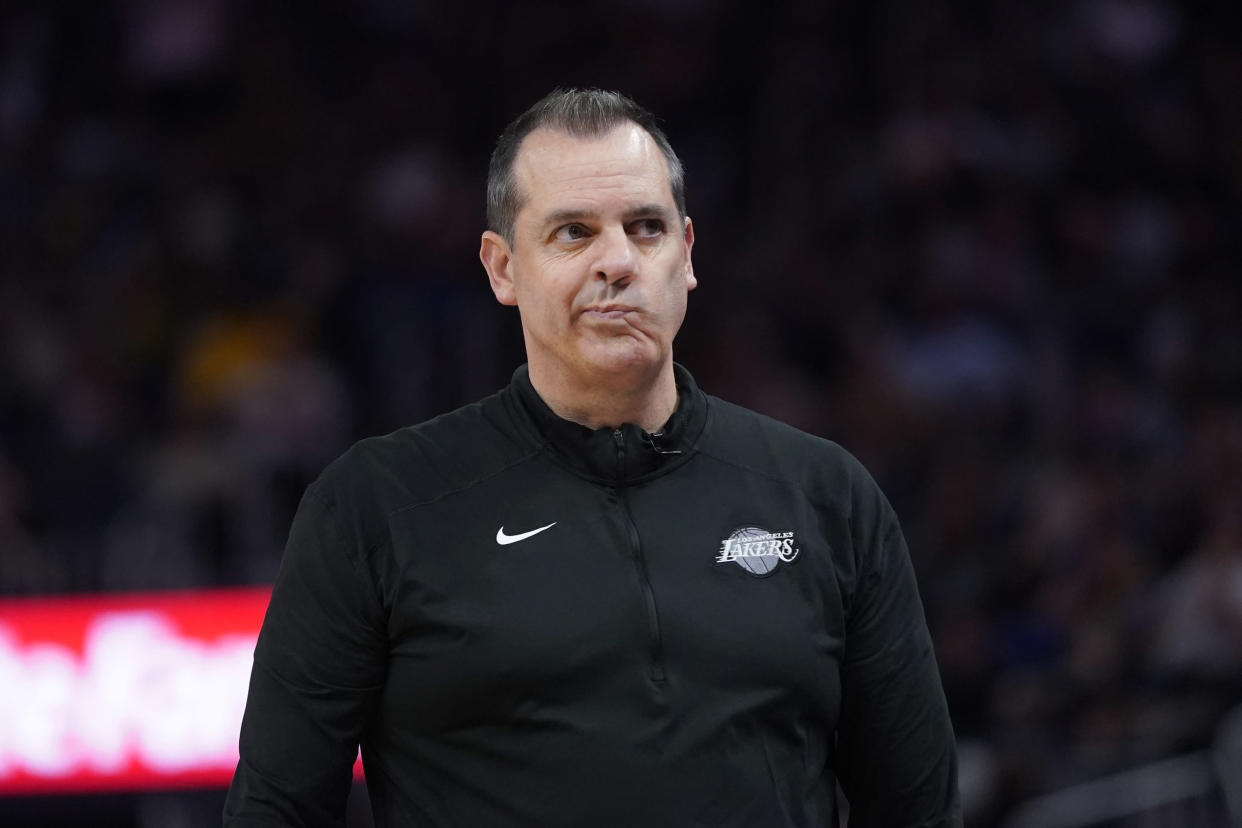 At the deadline, a deal to swap Westbrook with Houston Rockets guard John Wall fell apart because of the Lakers’ unwillingness to include their 2027 first-round pick, Yahoo Sports’ Chris Haynes reported. Wall, who did not play this season because of a disagreement with the Rockets on his role, has about the only contract in the league that would work for a Westbrook swap.

At the time, Westbrook had been relegated to the bench late in games and was vocal about his displeasure in Vogel’s decision.

This summer, the Lakers will have first-round picks in 2027 and 2029 that can be included in trades.

The team never found cohesion, as James missed 26 games with various injuries and Davis missed 42. Even when healthy, there were glaring problems with the roster construction and who would step up in the clutch. Many predicted the outcome from the outset, but James implored media, fans and others — in a now-deleted tweet — to “keep that same narrative energy” throughout the season.

That “narrative” led to the most disappointing season in NBA history.

Vogel went 127-98 in three seasons with the Lakers. He was hired in May 2019 after Luke Walton and the Lakers parted ways after three seasons in which the team missed the playoffs each year.

In January, the Athletic’s Bill Oram and Sam Amick reported Vogel was “coaching for his job” and would be “evaluated on a game-to-game basis.”

“In this business and with this team, if you’re not winning at a super-high level, you’re going to get this type of noise,” Vogel said at the time, per the Associated Press. “I’m good at blocking it out. I feel good about the job we’re doing, and obviously we believe the results are going to come. But over the course of an 82-game season with a new group, you’re going to have some ugly nights.”

It sure got ugly.