Revealed: Highland Park ‘shooter who killed at least six and injured dozens’ in July 4 massacre was ‘known to law enforcement’

The rapper suspected of killing six people and wounding more than a dozen others during his massacre at a July 4 parade ‘was known to law enforcement’.

Six people were killed and 24 wounded during an independence day parade massacre in the affluent Chicago suburb of Highland Park, Illinois, on July 4.

Suspect Robert ‘Bobby’ Crimo III, 22, who goes by the moniker Awake the Rapper, and boasts more than 16,000 monthly listeners on Spotify, was reportedly ‘known to police’.

It is not yet known if this was because of the violent videos that were hosted by YouTube until they were taken down last night.

Music videos posted by Crimo online last fall include a drawing of himself shooting people and a clip of himself throwing bullets on the floor of a classroom while wearing armor in what appears to be a joke about school shootings. 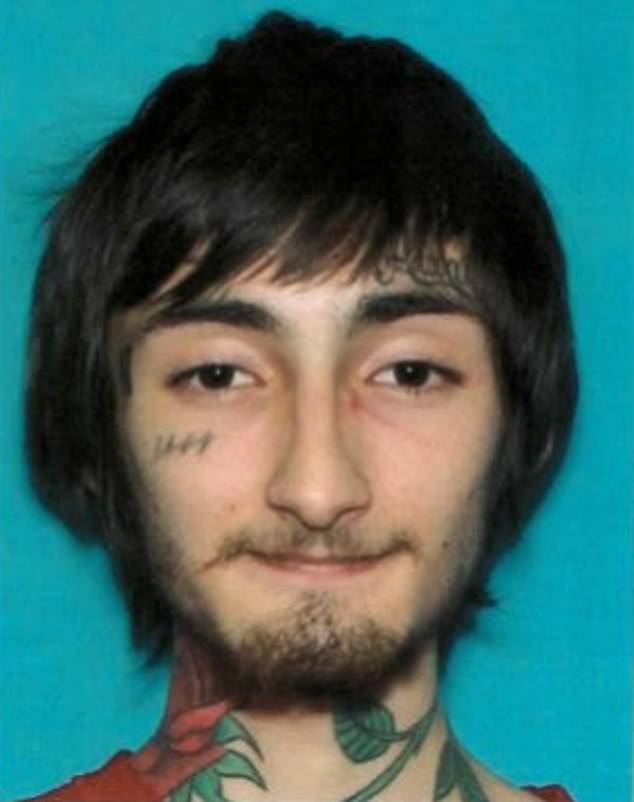 An IMDb page about the suspect describes him as a ‘rapper, singer, songwriter, actor and director from Chicago’ 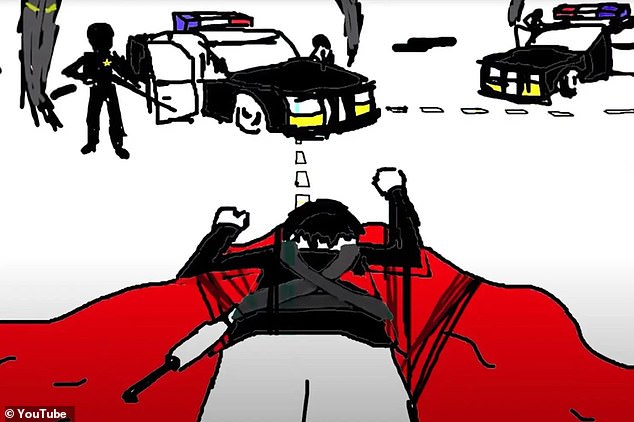 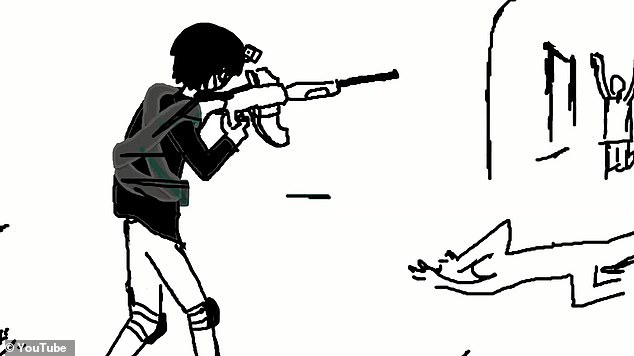 One YouTube music video – which saw Crimo eerily discuss his ‘destiny’ – depicted a figure that appears to be the suspect firing a rifle, while one victim lies on the floor and another holds their hands in the air

His victims were between the age of eight and 85, with at around four of those shot believed to be children.

So far, synagogue teacher Jacki Sundheim, a married mother, and grandfather Nicolas Toledo, 78, have been named as victims.

Sundheim was remembered in a glowing tribute posted by her synagogue.

Toledo’s family told of how they were splattered with his blood at the event – which they say he had been reluctant to go to.

President Joe Biden said he and his wife Jill were ‘shocked by the senseless gun violence that has yet again brought grief to an American community on this Independence Day’, and vowed to continue the fight against the shooting ‘epidemic’.

Crimo was arrested after an eight-hour manhunt that involved local and federal authorities.

In 2020, Crimo was pictured attending a Donald Trump rally while dressed as Where’s Waldo. Another picture has emerged showing the suspect wrapped in a Donald Trump flag. 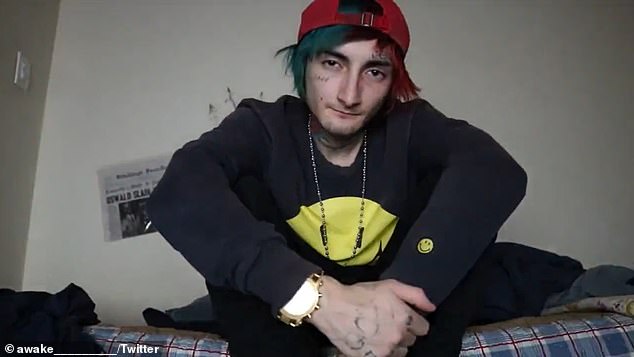 In one online bio, Crimo boasted of having a net worth of $100,000. On his Spotify page, he has over 16,000 monthly listens, He is pictured as his rap alter-ego Awake 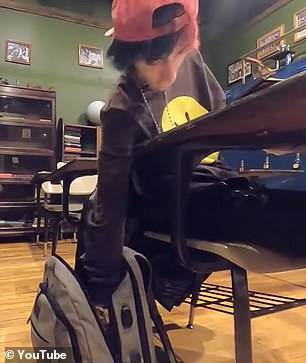 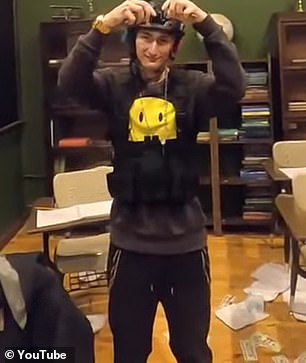 Crimo posted multiple disturbing videos which have taken on a new relevance in the wake of the shooting, including a clip where he reached into his bag in an empty classroom, before the screen cut to him in body armor scattering bullets around the now-trashed room 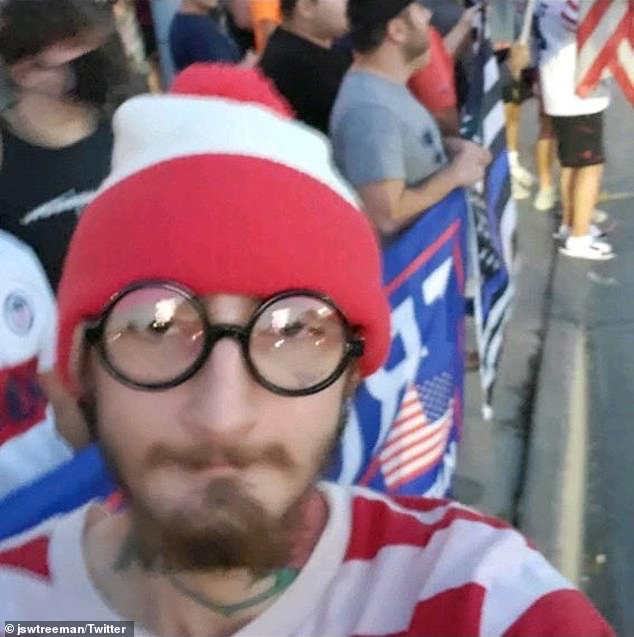 Crimo has attended multiple Trump rallies in the past. One of which was described as ‘tense’ after counter-protesters showed up, according to the Chicago Tribune 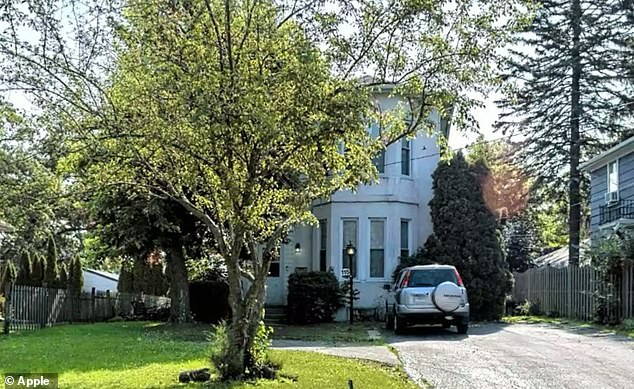 At one of the rallies that Crimo was pictured at in Northbrook, Illinois, the Chicago Tribune described it as ‘tense ‘ but said that there was no arrests made as counter-protesters showed up at the event. The ex-president was not present at that rally.

The suspect’s IMDb page describes him as being the middle child of three who grew up in an Italian-American family in Highland Park, Illinois.

The suspect’s ties to the community go back as far as his grandfather, Robert Crimo, who was born in Highland Park in 1929. Robert Crimo died in 2018. 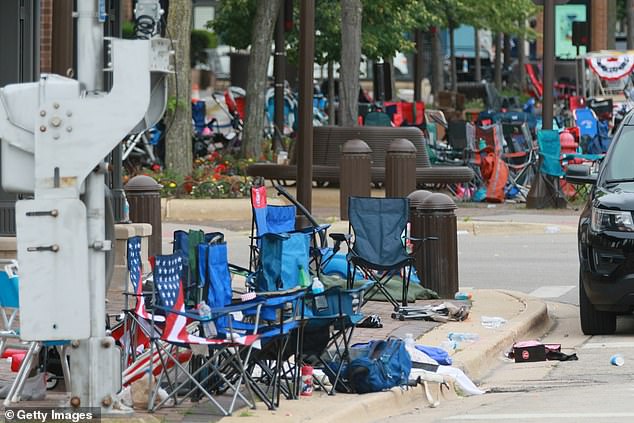 Belongings were left behind at the scene of a mass shooting along the route of a Fourth of July parade in Highland Park, Illinois 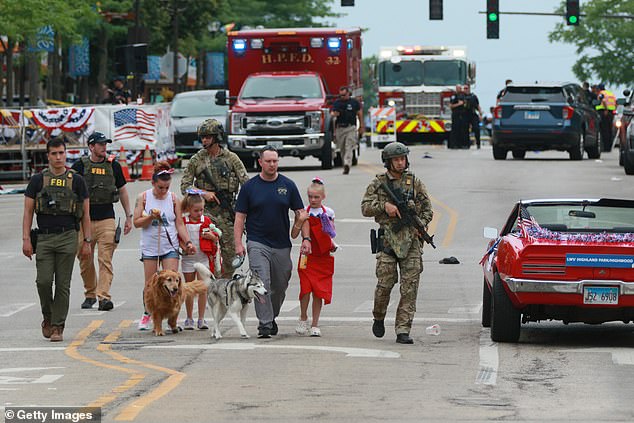 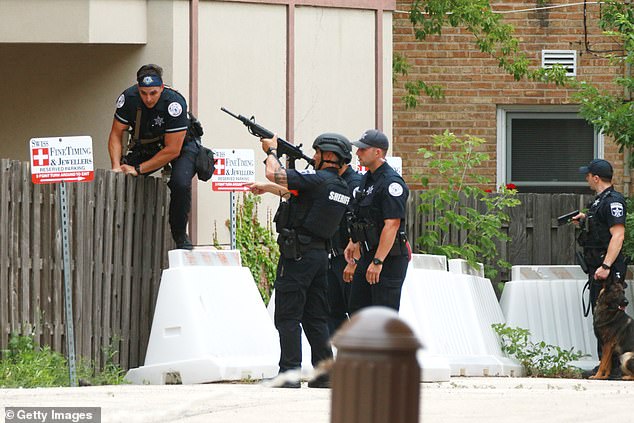 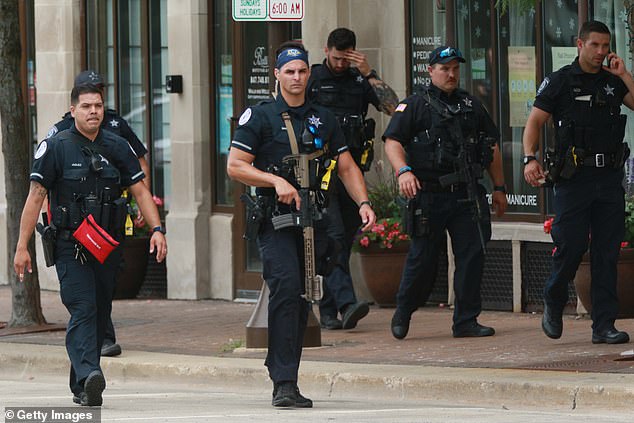 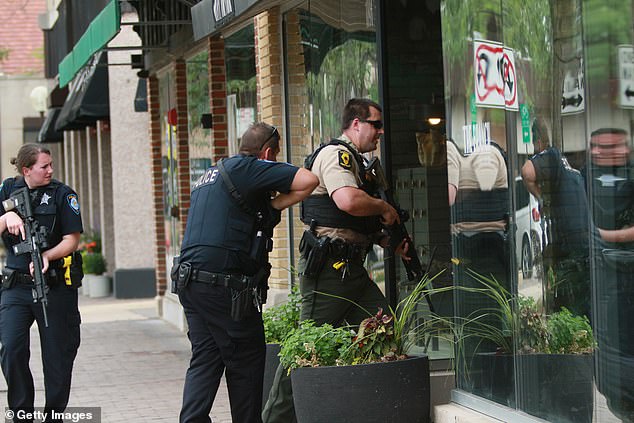 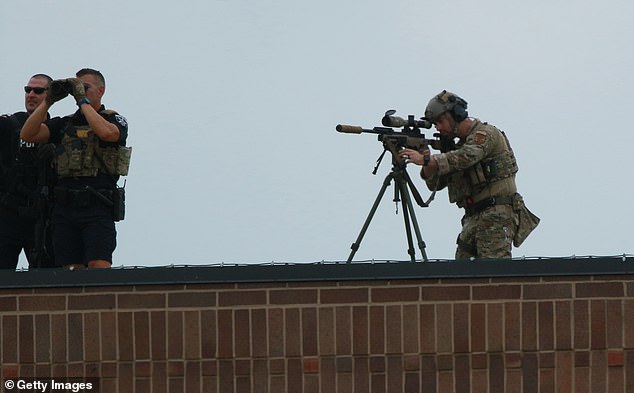 His obituary names the suspect’s parents as Bob Jr. and Denise. Most of the family mentioned in the tribute live in the Highland Park-area.

Crimo’s father Bob Sr, 58, is a local deli owner who once ran for mayor, while his mom Denise Pesina, 48, was once arrested on suspicion of domestic battery.

She appears to have become a Mormon and is also into alternative therapies, according to her Facebook page.

Crimo has two siblings, including a 27 year-old sister called Lynette Pesina, with the family residing in a comfortable $425,000 home in Highwood, close to the scene of the shooting.

The family lives along Pleasant Avenue in Highwood, just north of Highland Park.

Their home is located across the street from Oak Terrace Elementary School. 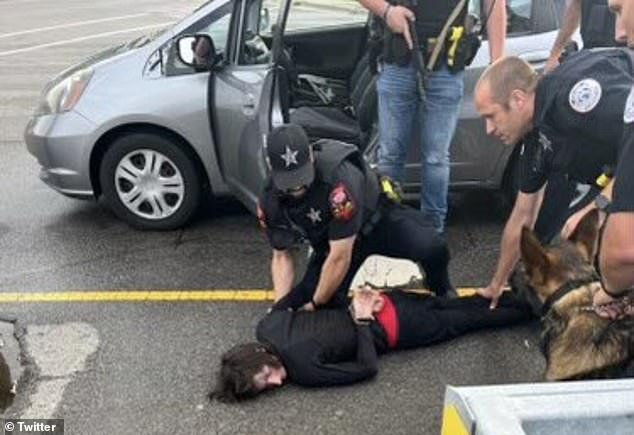 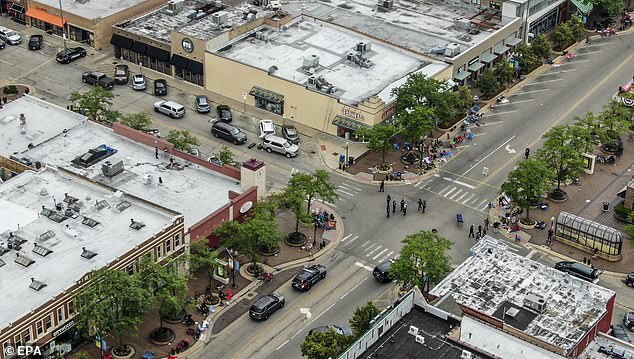 The location where the suspected shooter was holed up is thought to be on top of Gearheads, an outdoor equipment store. A ladder can be seen propped against its wall in this image taken after the shooting 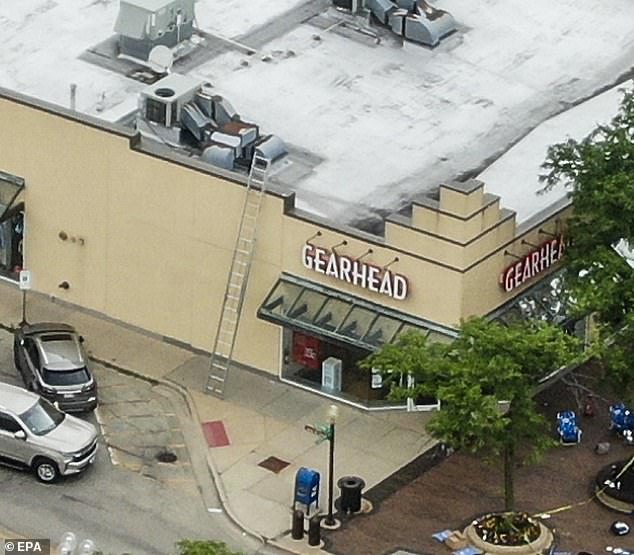 A close-up shows the ladder propped against the wall of the single-story Gearheads store. It has been suggested that this is where suspected shooter Bobby Crimo opened fire from, although investigators have yet to confirm that this was the ladder he used 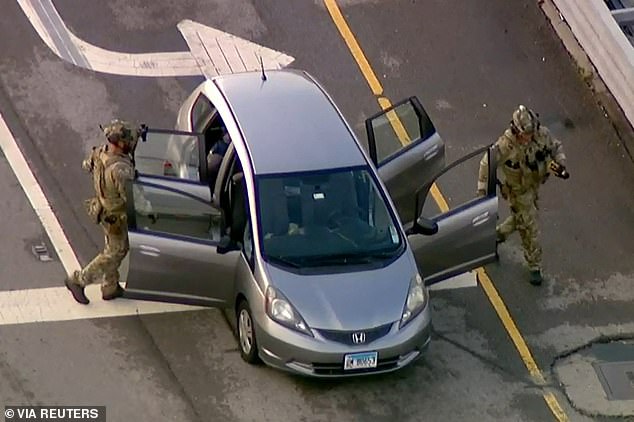 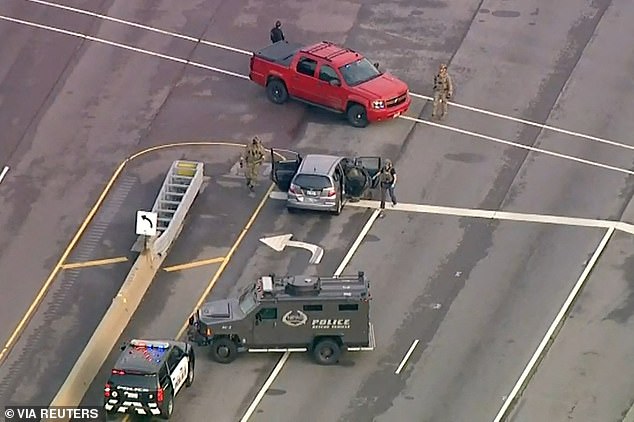 Synagogue teacher is identified as second victim of Chicago July 4 massacre as family of grandpa, 76, tell how they were splattered with his blood as he was executed

A synagogue teacher has been identified as the second victim of the July 4 Highland Park gun massacre that killed six people.

Jacki Sundheim, a longtime staffer at North Shore Congregation Israel, was shot and killed when a gunman opened fire at the event, unleashing a hail of bullets on the crowd, the synagogue announced in an email to congregants Monday night.

‘Jacki was a lifelong congregant of NSCI and a cherished member of NSCI’s staff team for decades,’ the synagogue wrote in an email that announced her murder ‘Jacki’s work, kindness and warmth touched us all.’

Sundheim, was the Reform synagogue’s events and b’nei mitzvah coordinator, according to its website. She is survived by her husband Bruce and daughter Leah, the Times of Israel reported.

‘There are no words sufficient to express the depth of our grief for Jacki’s death,’ the synagogue added. 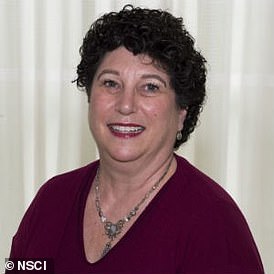 Jacki Sundheim, a longtime staffer at North Shore Congregation Israel, was shot and killed when a gunman opened fire at the Fourth of July parade in Highland Park, Illinois on Monday

Earlier on Monday evening, a beloved grandfather from Mexico had been identified as one of the victims, by his family who said he was shot in the head as he sat in his wheelchair, his blood splattering on them.

Nicolas Toledo, 76, had not wanted to attend the parade in Highland Park, Illinois, his granddaughter told the New York Times.

But because of his disabilities that restricted him to a wheelchair, and his family’s insistence of going, he obliged. 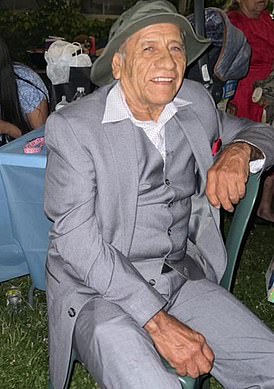 Nicolas Toledo, 76, had not wanted to attend the July 4th parade in Highland Park, Illinois, on Monday, his granddaughter told the New York Times. But because of his disabilities that restricted him to a wheelchair, and his family’s insistence of going, he obliged

In April 2019, Crimo’s father ran for mayor in Highland Park.

It does not appear that his campaign was backed by a political party. His slogan was a: ‘A Person for the People.’

Bob Crimo was defeated by the town’s current mayor, Nancy Rotering, a liberal, who ran her campaign partly on a platform about gun control.

In a pre-election profile, Bob Crimo said that he was the owner of two restaurants in the area, White Hen in Ravinia and Bob’s Pantry & Deli in Braeside, Illinois.

He wrote in the profile: ‘I’m running as mayor as a person for the people in our community.’

He continued: ‘It’s my way of giving back to the community who have been so supportive of me over the years. I live local and I will stay local.’

In a 2018 feature with the Chicago Tribune, Bob Crimo was pictured with Denise Pesina.

He describes his restaurant as a ‘family-run and family-orientated store.’

In February 2015, Pesina was arrested in Highland Park on charges of domestic battery while driving, reported Patch.com at the time.

Further details on the outcome of that case have not been shared.

Following his defeat, Bob Crimo wrote on Facebook: ‘This has been a great experience. I cannot thank my supporters enough.

‘Although the polls weren’t in my favor, I will continue to do my best to further the improvement of Highland Park for my fellow neighbors. Thank you all so much again.’

On May 27, the same day that 19 children and two teachers were slaughtered at an elementary school in Uvalde, Texas, Bob Crimo liked a tweet that read: ‘Protect the Second Amendment like your life depends on it.’

The suspect’s mother, Denise Pesina, is a healer with a business named Trilogy Energy Systems.

She regularly posts revealing photos of herself on her Facebook, often while posing with her sphinx cat Sanjay.

According to the company’s mission statement: ‘Trilogy Energy Systems is committed to the wellbeing of ALL energy systems.

‘A FULL SPECTRUM HEALING cooperative. One person has the ability to influence innumerous lives.’

The profile on that page says that Pesina studied at Traditional Chinese Medicine at Shanghai University and at the The Ayurvedic Institute, a NewMexico-based school that teaches the principles and practices of Ayurveda, an alternative medicine teaching.

In one of the suspect’s songs, Crimo rapped: ‘My actions will be valiant and my thought is unnecessary, I know what I have to do, I know what’s in it, not only for me, but for everyone else.

According to the FBI, Crimo’s has tattoos showing four tally marks with a line through them on his right cheek, red roses and green leaves on his neck and cursive script above his left eyebrow that reads: ‘Awake.’

The feds said that Crimo has ties in the communities of Rockford, DeKalb and Elgin in Illinois.

An IMDb page about the suspect describes him as a ‘rapper, singer, songwriter, actor and director from Chicago.’

The most viewed video on the rapper’s YouTube channel is the music video for his song: ‘On My Mind.’ The video, showing a the suspect in a classroom.

Crimo operated two channels both of which have been deleted for ‘violating YouTube’s Community Guidelines.’ 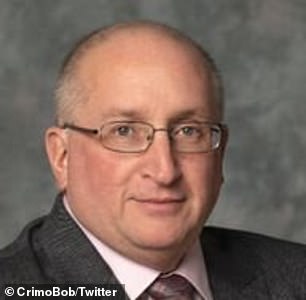 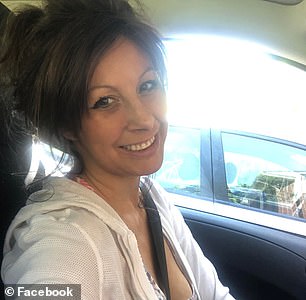 Bob Crimo ran unsuccessfully for mayor of Highland Park in 2019. The suspect’s mother Denise Pesina is an alternative healer 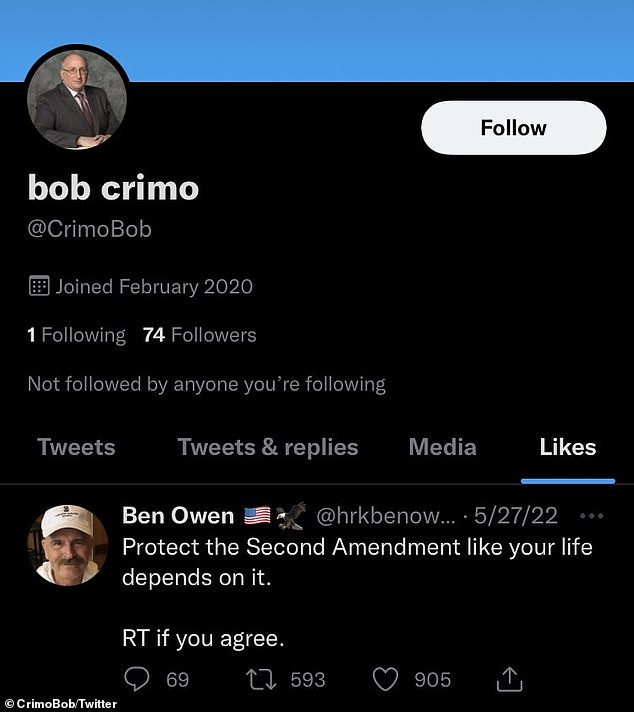 On May 27, the same day that 19 children and two teachers were slaughtered at an elementary school in Uvalde, Texas, Bob Crimo liked this tweet 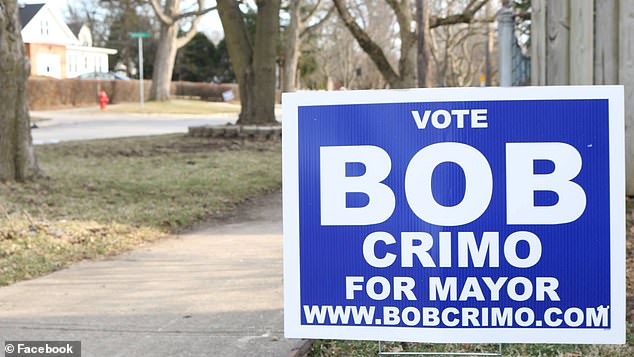 Bob Crimo was defeated by the town’s current mayor, Nancy Rotering, a liberal, who ran her campaign partly on a platform about gun control. 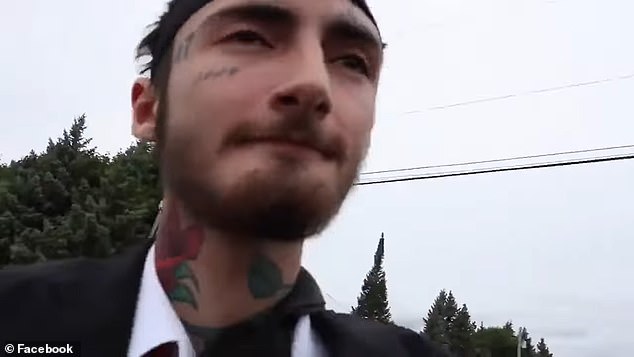 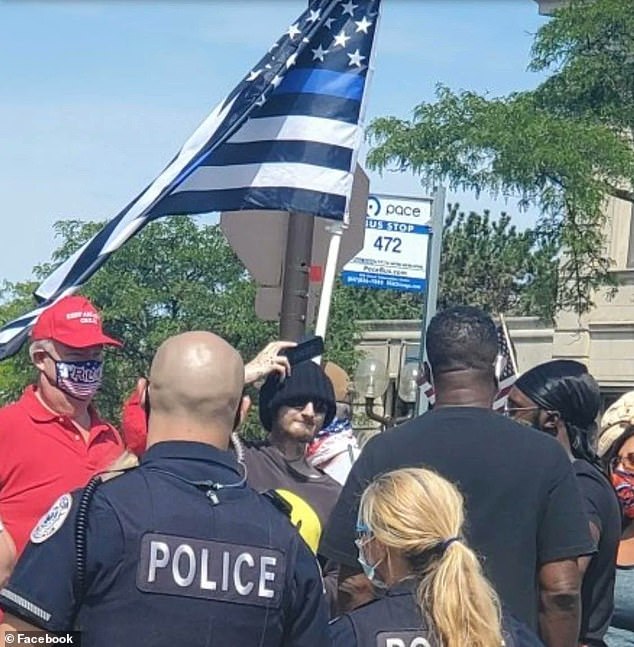 This year Crimo released an EP titled: ‘Brainwashed.’ The tracks included: ‘Dead Again’ and ‘I Am the Storm’

The track begins as a slow ballad, including the lines: ‘You’re always on my mind. Cutie with the fat ass, I wanna make you mine. I’m running out of time. Shorty we can skip class, smoke and chill online.’

The song has a sudden change in tempo and shows Crimo reaching into a backpack. The screen goes black and when the music returns it’s dubbed with maniacal laughter and, fast paced piano music and a heavy drum beat.

The video then shows the classroom ransacked with the suspect smiling.

Crimo is clad in a combat helmet as he falls to the floor clutching his face and dropping bullets to the floor.

The bio goes on to say that his music career began when he was 11 when Crimo began uploading music online.

His music is in the genre of LoFi rap, according to his Spotify page. He has released three albums, the first in 2017 titled ‘Messages,’ that was followed with 2018’s ‘Observer’ and 2021’s self-titled ‘Awake the Rapper.’

This year he released an EP titled: ‘Brainwashed.’ The tracks included: ‘Dead Again’ and ‘I Am the Storm.’

In his most recent tweet from October 2021 on his artist Twitter page, the suspect tweeted: ‘I am not a robot.’