Kyiv – Russia has threatened to punish Lithuania with measures that would have a “serious negative impact” after the nation blocked some shipments by rail to Moscow’s Baltic Sea enclave of Kaliningrad – the latest dispute over sanctions imposed for Russia’s war in Ukraine.

Within Ukraine, Russian forces and their separatist proxies made further advances in the east, pushing towards Lysychansk, now Kyiv’s main bastion in the area of heaviest fighting in the eastern Donbas region that Moscow claims for the separatists. 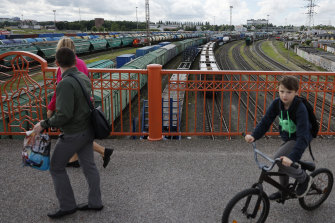 People on a bridge over the railroad tracks of the freight station in Kaliningrad, Russia, on Tuesday, June 21, 2022.Credit:AP

Ukraine, its forces and weaponry dwarfed by Russia’s, has begged the West to send more and better artillery. Defence Minister Oleksiy Reznikov announced on Tuesday the arrival of powerful German self-propelled howitzers.

Diplomatic attention has turned towards Russia’s Kaliningrad enclave, a Baltic Sea port and surrounding countryside where nearly a million Russians live, connected to the rest of Russia by a rail link through EU- and NATO-member Lithuania.

Lithuania has shut the route for transport of steel and other ferrous metals, which it says it is required to do under EU sanctions that took effect on Saturday. Russian officials say other basic goods have been blocked too.

Nikolai Patrushev, secretary of Russia’s Security Council, visited the enclave on Tuesday to chair a security meeting there. He said Lithuania’s actions showed that Russia could not trust the West, which he said had broken written agreements over Kaliningrad.

“Russia will certainly respond to such hostile actions,” Patrushev was quoted as saying by state news agency RIA. “Appropriate measures” were being worked out, and “their consequences will have a serious negative impact on the population of Lithuania”, he said without elaborating.

Lithuanian Prime Minister Ingrida Simonyte said it was “ironic” to hear Russia complain about alleged violations of international law, given that it had violated “possibly every single international treaty”. 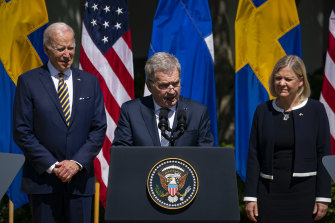 The standoff creates a new source of confrontation on the Baltic, a region already set for a security overhaul that would hem in Russia’s sea power as Sweden and Finland apply to join NATO and put nearly the entire coast in alliance territory.

The EU sought to deflect responsibility from Lithuania, saying the policy was collective action by the bloc.

In a symbolic but morale-boosting decision, Ukraine is set to become an official candidate for European Union membership on Thursday, diplomats said. 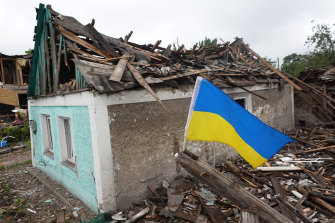 A Ukrainian flag flies next to a home that was heavily damaged by a Russian rocket attack on June 15, 2022 in Dobropillia in eastern Ukraine. Credit:Getty

In some of the bloodiest fighting seen in Europe since World War Two, Russia has made slow progress in the Donbas since April at the cost of thousands of soldiers’ lives on both sides.

But Ukrainian troops – and an estimated 500 civilians – are still holding out at a chemical plant in the east bank city of Sievierodonetsk, despite weeks of heavy bombardment.

The governor of Luhansk province, Serhiy Gaidai, confirmed that Toshkivka, a settlement on the west bank further south, had fallen into Russian hands. This could boost Moscow’s hopes of cutting off Lysychansk from Ukrainian-held territory.

Rodion Miroshnik, ambassador to Russia of the pro-Moscow separatist self-styled Luhansk People’s Republic, said forces were “moving from the south towards Lysychansk” with firefights erupting in a number of towns.

“The hours to come should bring considerable changes to the balance of forces in the area,” he said on Telegram.

Ukraine’s general staff said Russian forces had captured several other settlements to the south of Lysychansk.

Separately, police in Kharkiv, Ukraine’s second biggest city located in the north near the border with Russia, said five people were killed and 11 injured on Tuesday when Russian rockets struck an industrial building.

Meanwhile, Russia’s defence ministry said its missiles had hit an airfield near the port of Odesa in response to a Ukrainian attack on gas production platforms in the Black Sea.

Reuters could not independently verify either report.

Although fighting has favoured Russia in recent weeks because of its huge edge in artillery firepower, some Western military analysts say Russia’s failure to make a major breakthrough so far means time is now on the Ukrainians’ side.

Moscow is running out of fresh troops, while Ukraine is receiving newer and better equipment from the West, tweeted retired U.S. Lieutenant General Mark Hertling, a former commander of U.S. ground forces in Europe.

“It’s a heavyweight boxing match. In 2 months of fighting, there has not yet been a knockout blow. It will come, as RU forces become more depleted,” Hertling wrote.

Russia says its “special military operation” aims to disarm Ukraine and protect it from “fascists”. Kyiv and its Western backers say this is a false pretext to wage an unprovoked war of aggression.

In another reminder of the war’s heavy human toll, mourners in the western city of Lviv buried 27-year-old Artem Dymyd who, his father said, had returned from the United States to fight.

“When the full-scale invasion started, where was he? On the front line, of course,” said Oleh Tiakhnybok, a relative. “He was an angel and he will remain an angel for our family.”