Home » World News » Russia warning: Putin has ONE red line when it comes to NATO which would spark World War 3

Russia warning: Putin has ONE red line when it comes to NATO which would spark World War 3 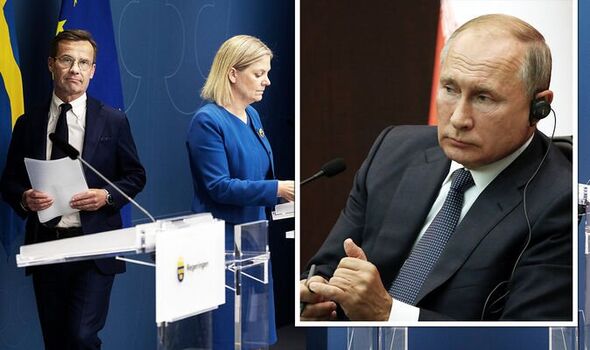 Despite ongoing threats from Moscow, Finland and Sweden have announced their formal bid to join NATO, a historic move for the two countries.

Having a somewhat change of heart, Putin said on Monday the proposed NATO enlargement posed “no direct threat to Russia”, before adding he had “no problem” with either Finland or Sweden – but under one condition.

The Russian President warned if military infrastructure expanded “on this territory”, it would “provoke a response from us … based on the threats they create for us.”

This appears to signal Moscow no longer has an issue with Finland and Sweden’s potential membership of NATO, providing the alliance does not dispatch troops or military equipment to the countries.

Sweden has continuously said it doesn’t want NATO military bases on its grounds, and Finland is unlikely to want it either, but did say conditions would be set after membership.

Putin said the NATO expansion was “a completely artificial problem because it’s all done in US interests”.

He added: “The problem has basically come out of nothing, but we’ll react to it appropriately” and also complained that Nato was trying to “control and influence the international security situation in other parts of the world, not for the best”.