‘Er..a little premature?’ Sadiq Khan is mocked over Twitter blunder as official Mayor account posts message about how it ‘was an honour’ to attend St Paul’s Jubilee service – 39 minutes BEFORE it began

Sadiq Khan was this morning questioned about his time travelling abilities after he posted gushing praise of how the Jubilee Service of Thanksgiving had gone – 39 minutes before it took place.

Mr Khan – one of many dignitaries at the St Paul’s ceremony – was accused of ‘obvious insincerity’ – over the now-deleted Twitter message at 10.51am.

The Thanksgiving Service starts at 11.30am, leaving Londoners scratching their heads as to how their Mayor could have foreknowledge of how it went.

His post – sent from his 3.2million-follower Mayor of London account – was not shared on his second identity on the site, which is just under his own name.

A source told Mailonline: ‘The tweet was a genuine error and it has now been deleted.’

Mr Khan, 51, said on the platform just after 10.50am: ‘It was an honour to attend the Service of Thanksgiving at St Paul’s London today, where people from all faiths and none came together to celebrate the Queen’s reign.

‘It highlighted not only the Queen’s deep faith, but also the many aspects of her varied and remarkable life.’

Followers of his Mayoral account reacted with horror at the mistake and questioned his sincerity. 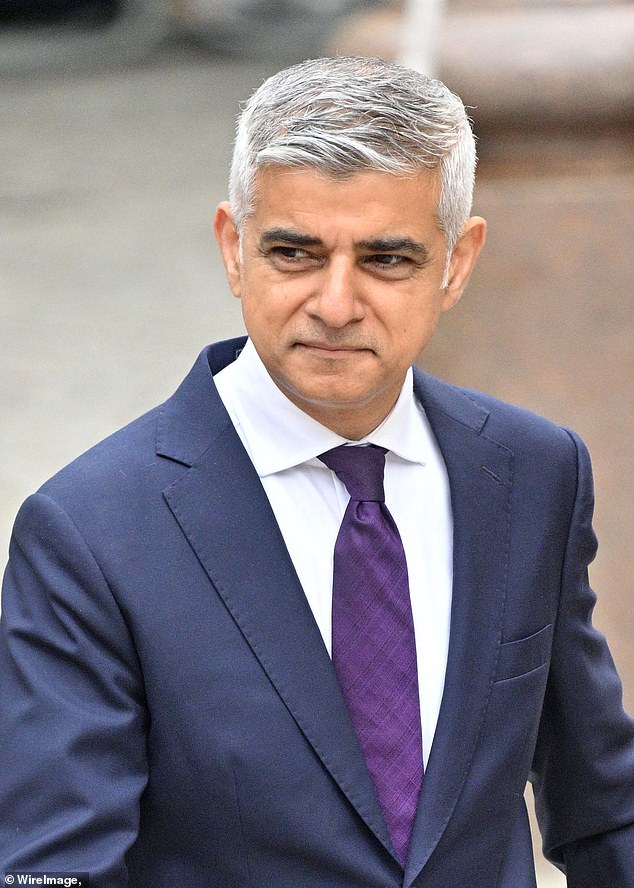 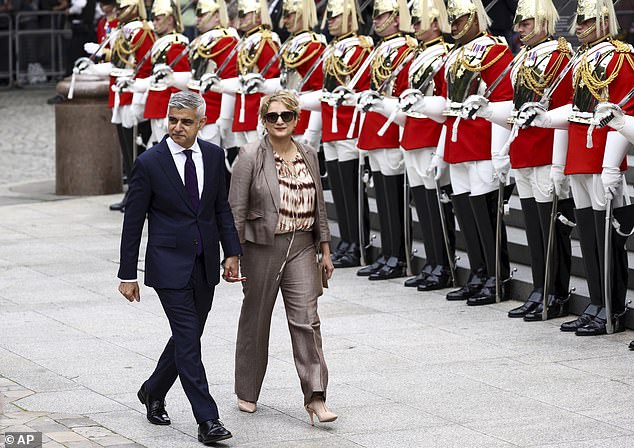 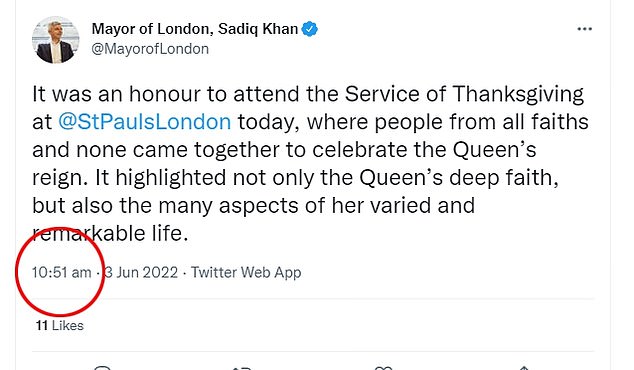 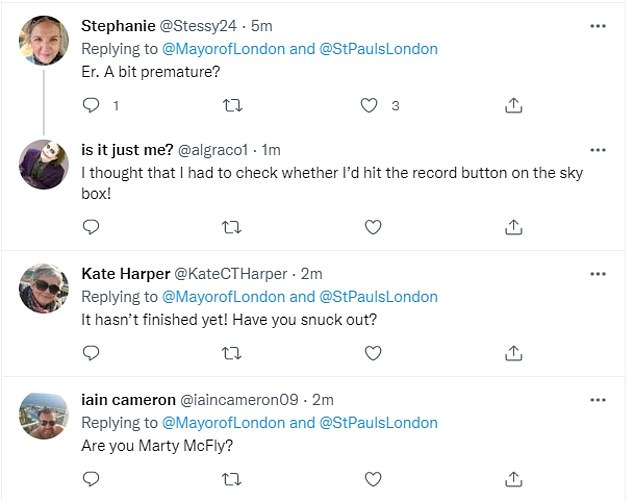 One called Stephanie wrote ‘Er. A bit premature?’ while Iain referenced the Back to the Future time traveller when he quizzed ‘Are you Marty McFly?’.

Others were less charitable, with Tony fuming ‘Past tense? It hasn’t started yet. The obvious insincerity of a mis-posted message speaks volumes about you.’

Morris raged: ‘Oh was it really? I understand the service itself starts at 11.30 and your Tweet appeared on my timeline at 10.51. ARE YOU TELLING A BLATANT LIE?’

Prince Harry and Meghan Markle were seen arriving at St Paul’s Cathedral for the Service of Thanksgiving for the Queen, who is watching on television from Windsor Castle after she was forced to pull out last night.

Prince Charles is officially representing the 96-year-old monarch at the service in London this morning, which is also being attended by Harry and Meghan for their first joint royal engagement in more than two years.

But the Queen will miss the event following a last-minute decision announced by Buckingham Palace at 7.30pm yesterday after she experienced ‘discomfort’ during Trooping The Colour events earlier in the day.

There will also be no appearance at St Paul’s from Prince Andrew after he tested positive for coronavirus.

The Queen will be watching the service from her Berkshire residence, and it will be broadcast nationally on BBC One. 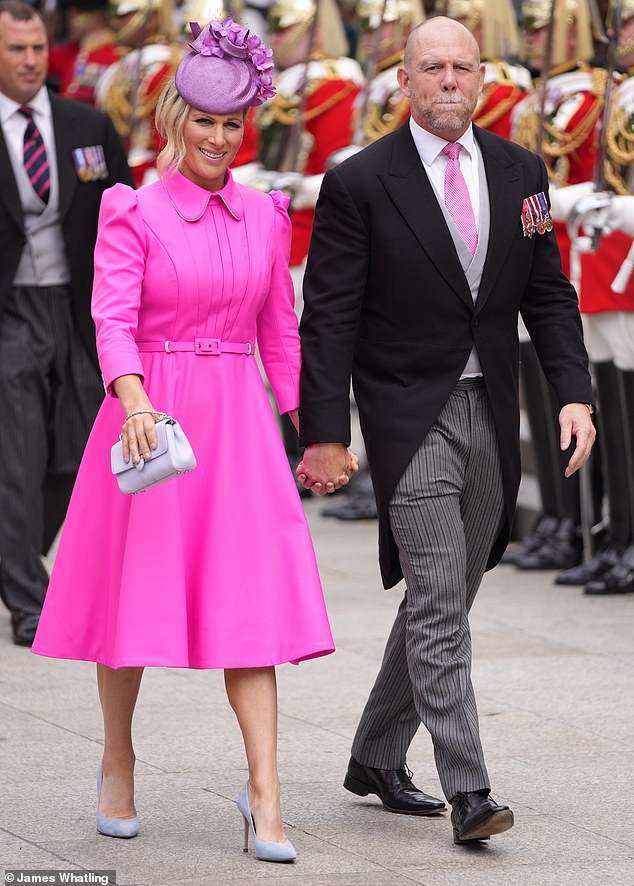 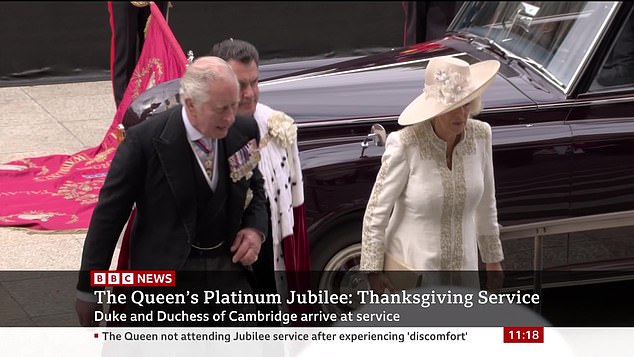 Political guests arrived ahead of the royals, including Prime Minister Boris Johnson and his wife Carrie, former prime minister Sir Tony Blair and his wife Cherie, Sir John Major and other ex-prime ministers Gordon Brown, Theresa May and David Cameron, and their spouses. Cabinet ministers Sajid Javid and Liz Truss were also there.

Soon after, Scottish First Minister Nicola Sturgeon arrived with her husband, and Labour leader Sir Keir Starmer. Members of the Royal Navy, British Army and Royal Air Force lined up on either side of the Great West Door.

The Duke and Duchess of Sussex had seats in the second row of the congregation, with Princesses Beatrice and Eugenie and their husbands, and Lady Sarah Chatto, the daughter of Princess Margaret, and her family.

Harry and Meghan were seated behind the Earl and Countess of Wessex who are in the front row with their children, Lady Louise Mountbatten-Windsor and Viscount Severn, and the Duke and Duchess of Gloucester.

Across the aisle, the Prince of Wales and Duchess of Cornwall, who have ornate chairs, had seats alongside them for the Duke and Duchess of Cambridge and the Princess Royal and her husband, Vice Admiral Tim Laurence.