Seemingly innocent bushland hides a deadly crocodile that almost cost a hunter his life when he nearly stepped on the predator – so would you have spotted it?

Terrifying images posted to social media by an Australian hunter show how he easily he could have been taken by a camouflaged crocodile.

Refrigeration mechanic Scott Gorman, 32, was pig hunting in Weipa, North Queensland, on Wednesday with two mates when he almost stood on one of the apex predators.

The deadly reptile was so well hidden in the long grass he didn’t see it until the last second. 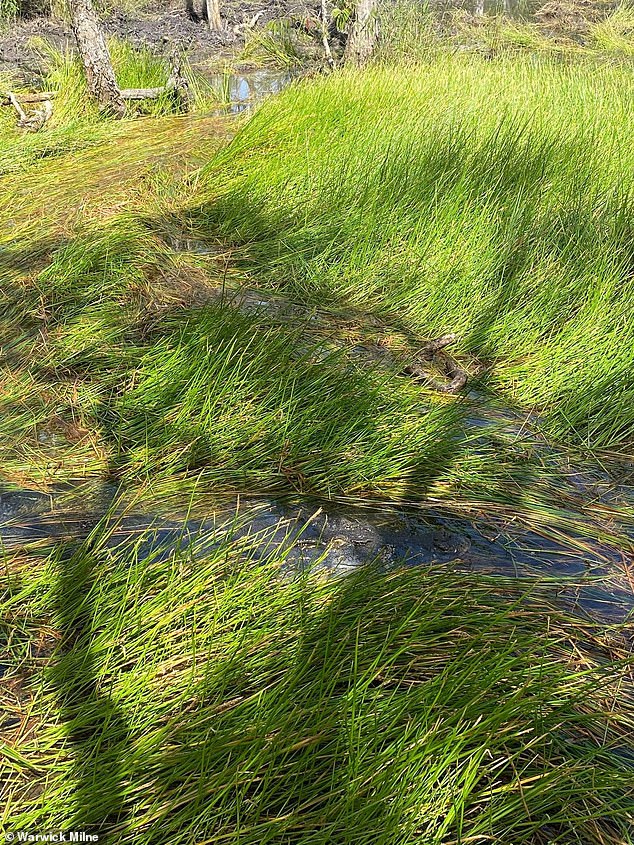 ‘We were about to walk where he was, but we just spotted a bit of his tail flick out of the water,’ he said.

‘It was a very close call, we felt pretty ill afterwards.’

Mr Gorman posted the images and videos to a Facebook group, confounding members who struggled to find the reptile in the images.

The motionless monster reptile expertly lay with its body under a narrow stretch of murky water with just a beady eye visible to the keenest of observers.

But even with a second look the killer reptile is almost invisible.

‘They use stillness and camouflage to hide and underwater stealth and lightening reflexes to kill,’ according to a Department of Environment resource on crocodiles.

It pointed out that going looking for crocodiles was extremely dangerous.

‘The best way to safely see crocodiles is by going on a commercial boat cruise or from a high point,’ it said.