London: Seven in 10 adults now have antibodies against COVID in a leap towards herd immunity that far exceeds government projections.

The latest figures from the Office for National Statistics (ONS) show that 68 per cent of adults now have some level of protection against the virus, either from vaccination or a prior infection.

The level has risen by one third in a month while infections have waned, meaning much of the upswing can be credited to Britain’s vaccine rollout. 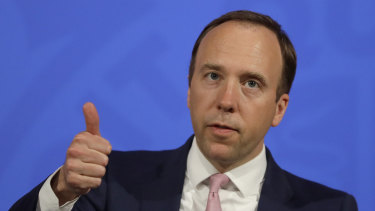 By contrast, modelling released by the Government’s Scientific Advisory Group for Emergencies earlier this month suggested that less than 45 per cent of the population would be protected by June 21, when lockdown restrictions are set to be eased.

Antibody rates are highest among the oldest age groups, who were vaccinated first and are most likely to have had two doses, the ONS said. Around 87 per cent of all over-70s in England now have antibodies.

Matt Hancock, the Health Secretary, said the data shows “more and more of us are benefiting from protection the vaccine gives us against this awful disease”.

Speaking at a Downing Street press briefing on Wednesday, Hancock said the presence of antibodies was a “measure of the protection that we have collectively built up right across the country”.

Officials suggested the latest figures, for the week ending April 11, may even underestimate the levels of protection as antibodies are not the only part of the immune system to respond to vaccination. The ONS data tracked more than 20,000 people to measure antibodies in their blood.

Professor Jonathan Van-Tam, the deputy chief medical officer, said it was not yet known how far antibodies protect against new COVID variants. He said he hoped that even if they were less able to combat infections, protection against severe disease would remain “much more solid”.

Ministers on Wednesday announced that they had secured 60 million more doses of the Pfizer vaccine, which will be used for booster jabs to protect against new variants in the autumn.

Enough doses have been secured to cover the whole country, but decisions about how the programme is rolled out have yet to be taken by the joint committee on vaccination and immunisation (JCVI).

Officials said the Government was preparing for a booster programme “based on clinical need” which would protect the most vulnerable ahead of winter. It comes as new data from Public Health England shows that one dose of a COVID-19 vaccine reduces household transmission of the virus by up to half.