Orangutan forced to box or wear bikini tops and mini-skirts in the world’s cruellest safari park, a dog-drowning dungeon, a performing bear and a python with its mouth taped shut among the shocking photos highlighting animal cruelty across the globe

Orangutans forced to box or wear mini skirts, a dog-drowning dungeon and a performing bear are on display in shocking photos highlighting animal cruelty around the world.

In one image, a forlorn orangutan in boxing gloves and shorts sits huddled at the side of a boxing ring at a Thai safari.

Another photo taken at the Safari World site near Bangkok shows three orangutans in bikini tops, mini skirts and summer dresses forced to perform a show for tourists.

Even more sinister is a filthy dog-drowning dungeon in Cambodia, where a monkey can be seen sitting above the grimy waters of the ‘drowning pit’ as three canines sit squashed into a cage nearby.

The dogs are killed for the dog meat trade, with another shocking image showing decapitated heads and dismembered paws in a bloody bucket. 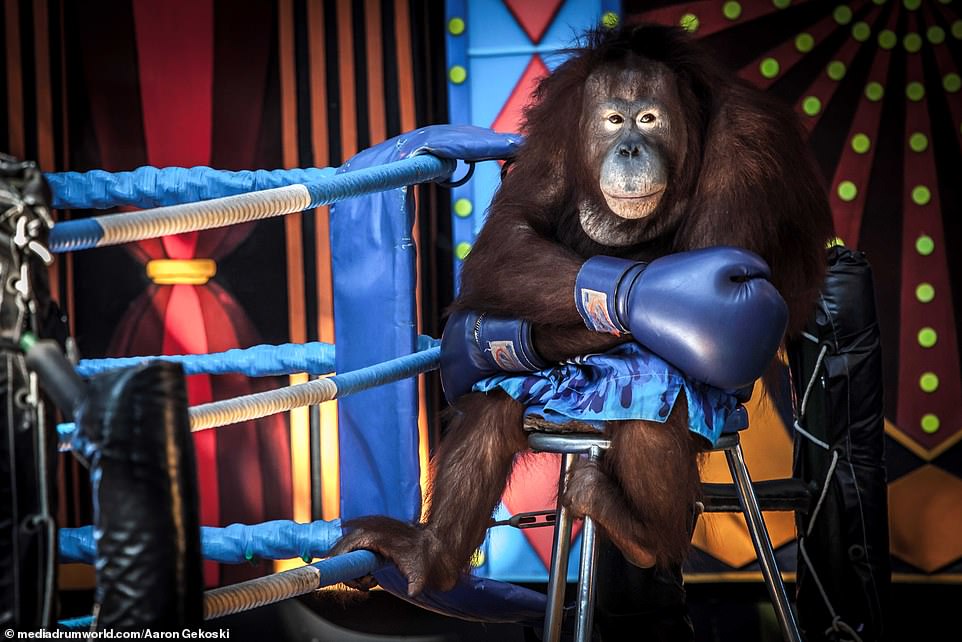 THAILAND: A forlorn orangutan in boxing gloves and shorts sits huddled at the side of a boxing ring at a safari outside Bangkok 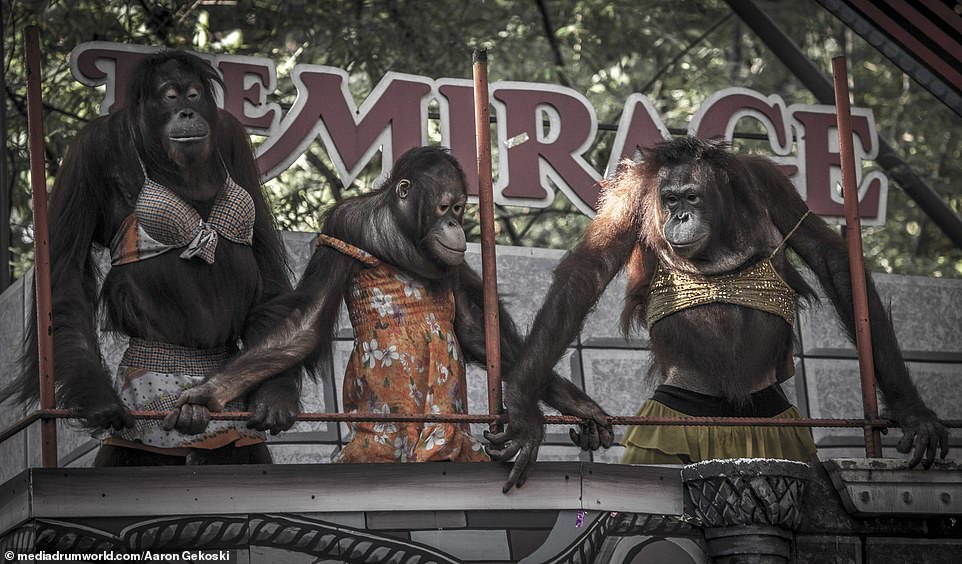 THAILAND: Three orangutans in bikini tops, mini skirts and summer dresses are forced to perform a show for tourists at Safari World 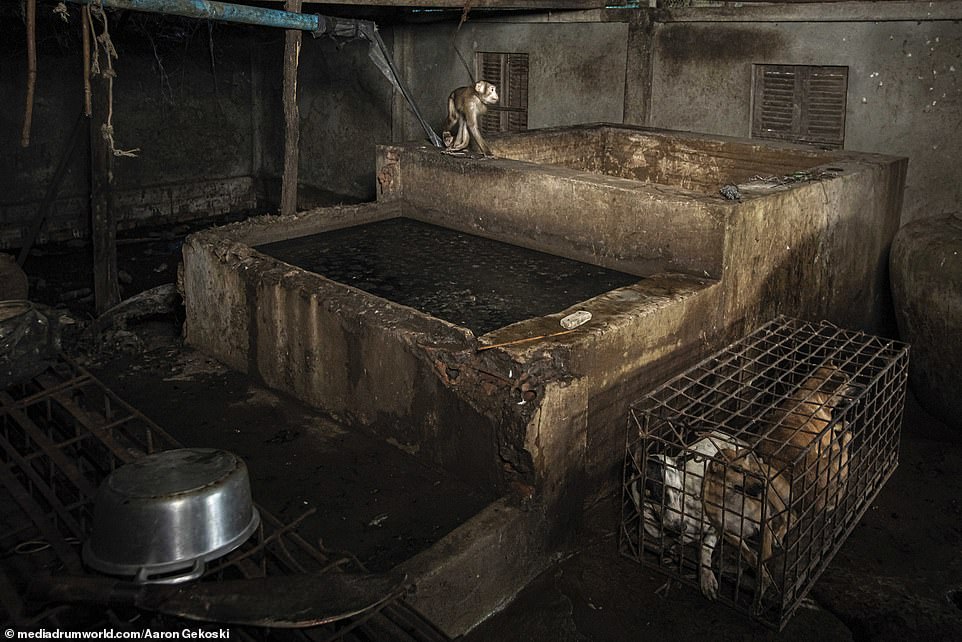 CAMBODIA: A filthy dog-drowning dungeon in Cambodia, where a monkey can be seen sitting above the grimy waters of the ‘drowning pit’ as three canines sit squashed into a cage nearby 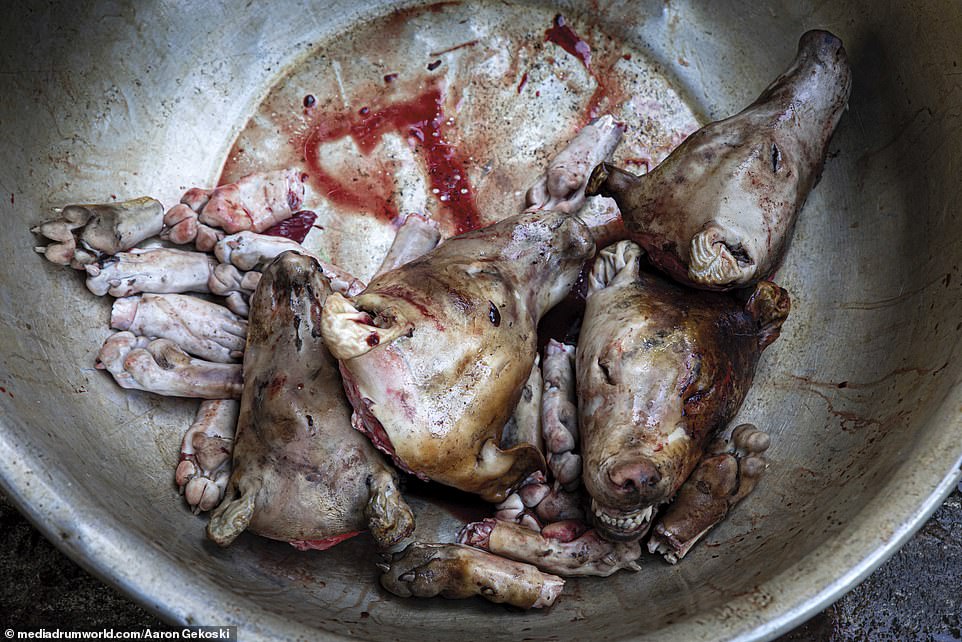 CAMBODIA: Decapitated heads and dismembered paws of dogs in a bloody bucket. The animals were killed for the dog meat trade

The photos are just some of the heartbreaking images collected in a new book by British photographer Aaron Gekoski.

Animosity: Human-Animal Conflict in the 21st Century is the product of 13-years’ worth of travels by the environmental photojournalist who has captured images from all around the world, from Mozambique’s shark fishing industry, to snake hunters in the U.S.

Gekoski described the photographs in the book as being ‘from the frontline of conservation,’ saying trained as a wildlife ranger in Borneo, worked undercover to expose Namibia’s annual seal cull and investigated the new craze for exotic pets while putting the book together. 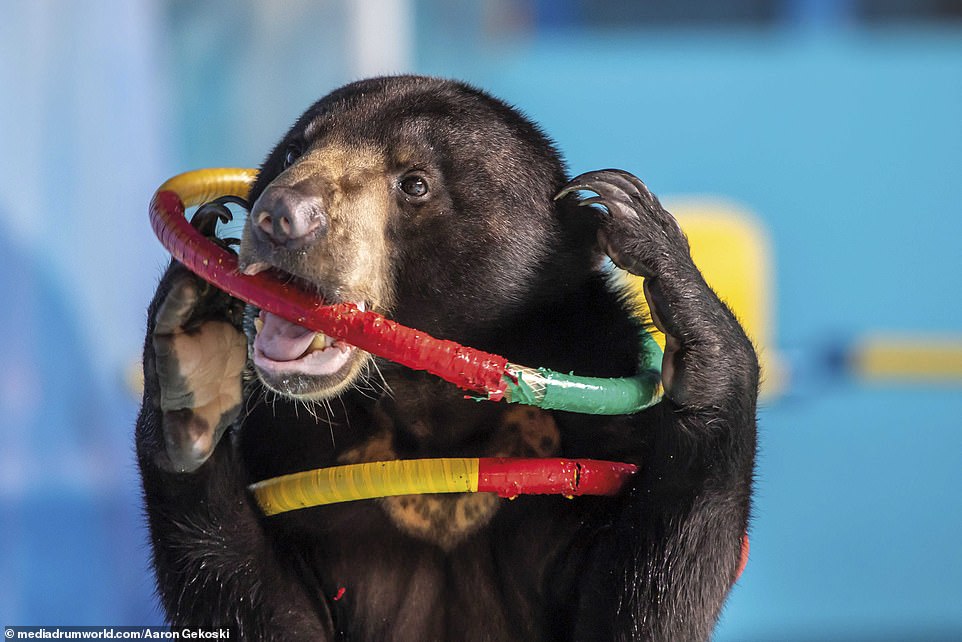 INDONESIA: A sun bear performs at a travelling dolphin show in Bogor. The bear was given incentives and fed treats throughout, for some animals used in shows, this will be the only time they eat 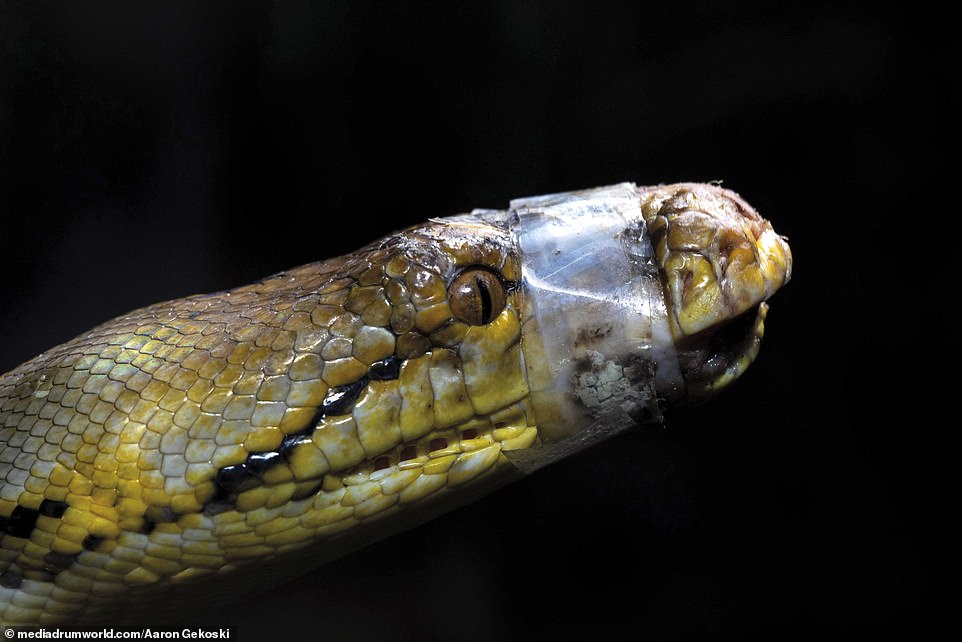 INDONESIA: A python with its mouth taped shut is used as a prop for selfies with tourists in Bali 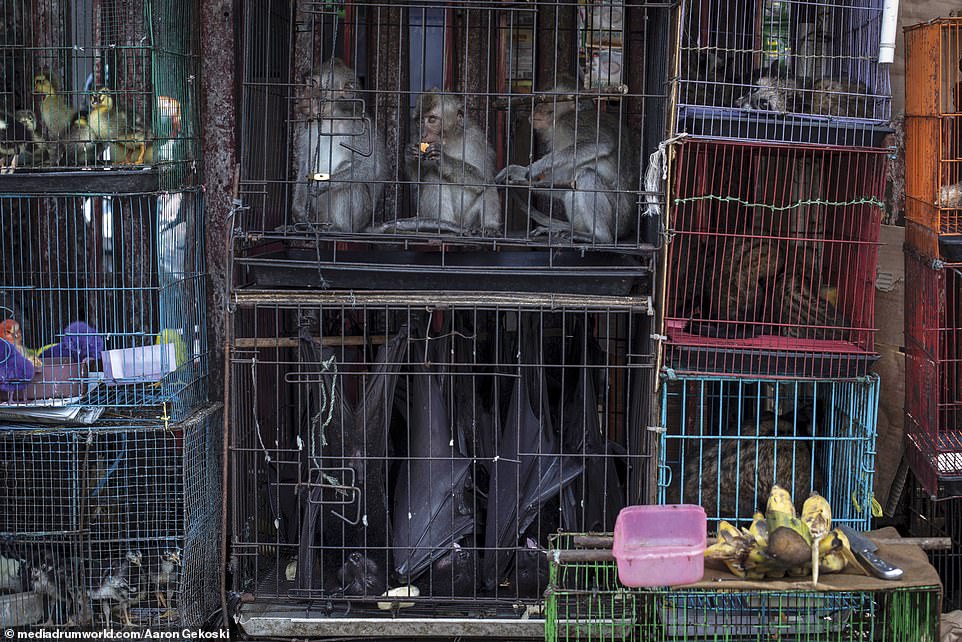 ‘These stories provide a snapshot of human-animal conflict in today’s ever-changing world where complex and multifaceted issues often lead to more questions than answers.

‘Would you fin a shark to support your family? Is killing and eating dogs any worse than chickens? Why does one animal make a suitable pet and not another?

‘I look at these photographs as modern-day fossils – a permanent reminder of a planet in flux and a record of what may soon be lost forever,’ he said.

Several images show circus animals in Asia and Europe, including an elephant performing in Germany and a group of lions caged in a lorry in the Czech Republic.

Another shows a sun bear forced to perform at a travelling dolphin show in Indonesia. The bear received incentives and treats throughout the show. For some animals in such shows, this will be the only time they eat. 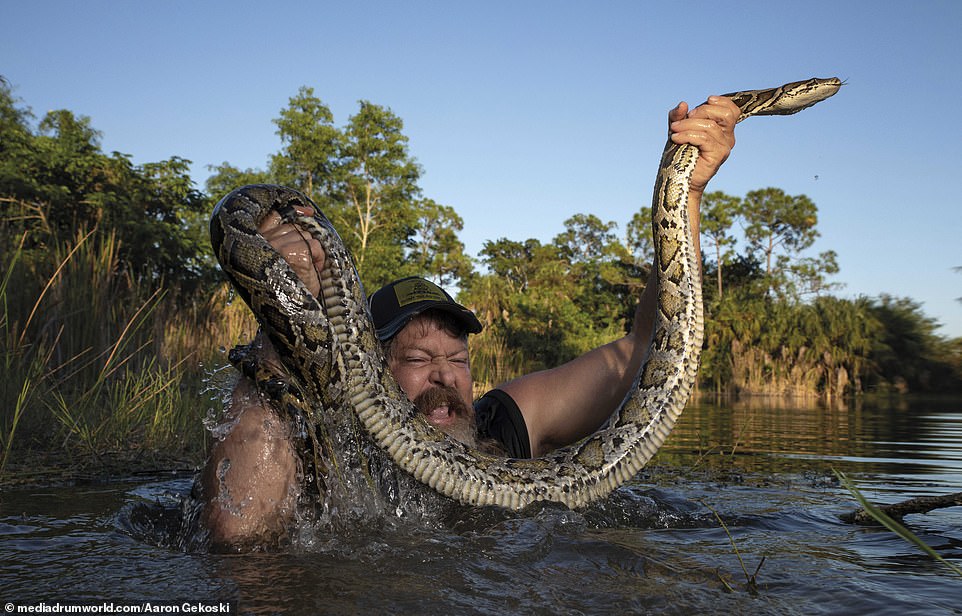 USA: Snake hunter Dusty Crum catching a Burmese python in the Florida Everglades. The snakes were thought to have been released by exotic pet owners when they grew too big. Their increasing number is causing ecological damage and threatens to eradicate small mammal species 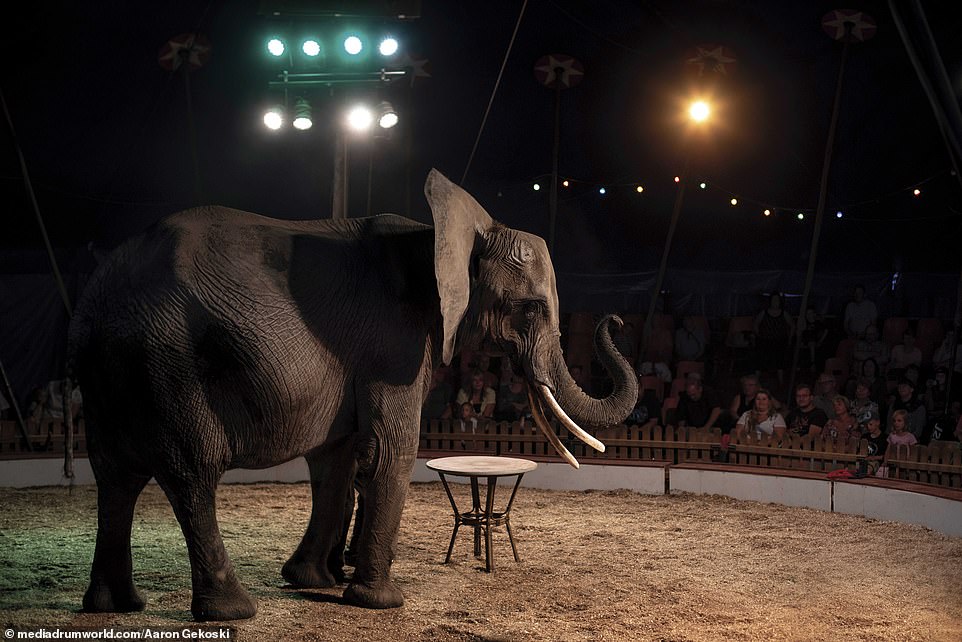 GERMANY: An elephant greets the crowd at a Elefantanhof-Platschow, Germany, a popular tourist attraction where visitors can ride elephants and watch them perform in circus shows

Another shows a vendor next to a table full of baboon and hornbill heads at a voodoo market in Benin. The young man tending the stall is holding the skull of a dog, which is painted to look like a leopard.

In another, a python can be seen with its mouth taped shut in Bali, Indonesia, where tourists queue to take a selfie with the dangerous snake.

A startling image from Cambodia sees a bracelet made from a dog’s penis – believed to be a good luck charm – cradled in a man’s hands.

Gekoski sees his role as a photojournalist as being ‘to document and broadcast the truth,’ adding that revealing some of these hard-hitting truths through his work has led to positive change.

Some people told Gekoski they’d decided to give up consuming palm oil products or visiting zoos after seeing his work.

‘Small victories add up and they keep me motivated within this very challenging career,’ he said. 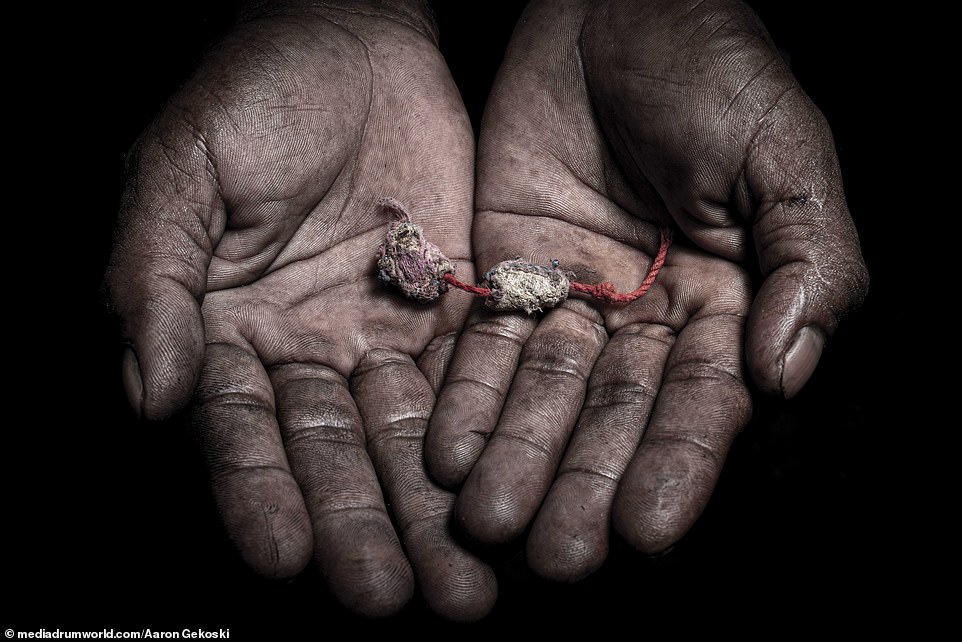 CAMBODIA: This dog penis bracelet held in a man’s hands is considered a good luck charm in Cambodia 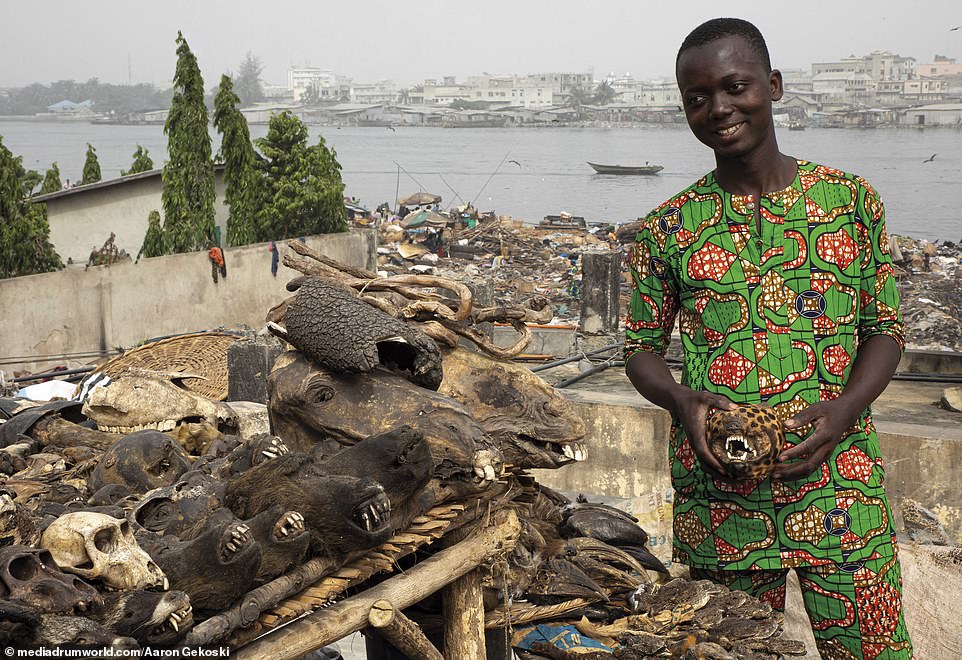 BENIN: A voodoo market in Benin with the heads of baboons and hornbills visible on a table. The vendor is holding the head of a dog painted to look like a leopard 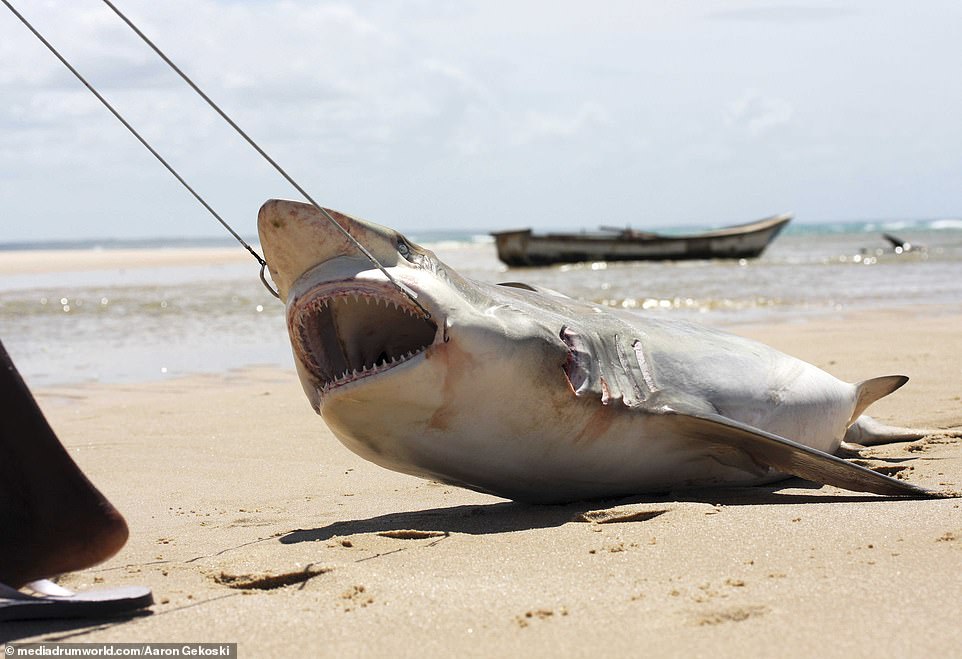 MOZAMBIQUE: A bull shark caught by fishermen is dragged along the sand in Mozambique. The shark’s fins will be removed and sold while the meat will be consumed by the local community

‘Animosity was created for the public, conservationists, government officials, scientists, photographers and anyone with an interest in the natural world.’

‘We’re amid a sixth mass extinction event – a self-inflicted environmental crisis. Globally, animals are being traded, hunted, poached, consumed, and exploited to the point of extinction.

‘I hope this book plays a small role in educating others on some of the greatest threats facing wildlife. We all have a role to play in making the world a better place for animals, whether it is eating less meat, boycotting cruel wildlife tourism attractions, or not keeping exotic animals as pets.

‘Animals are intelligent and sentient beings. They are loving and loyal, grieve the loss of loved ones, feel pain and suffer from depression.

‘They are not commodities for us to exploit, eat and enjoy.’

Animosity: Human-Animal Conflict in the 21st Century by Aaron Gekoski is available from G2 Publishing for RRP £30. 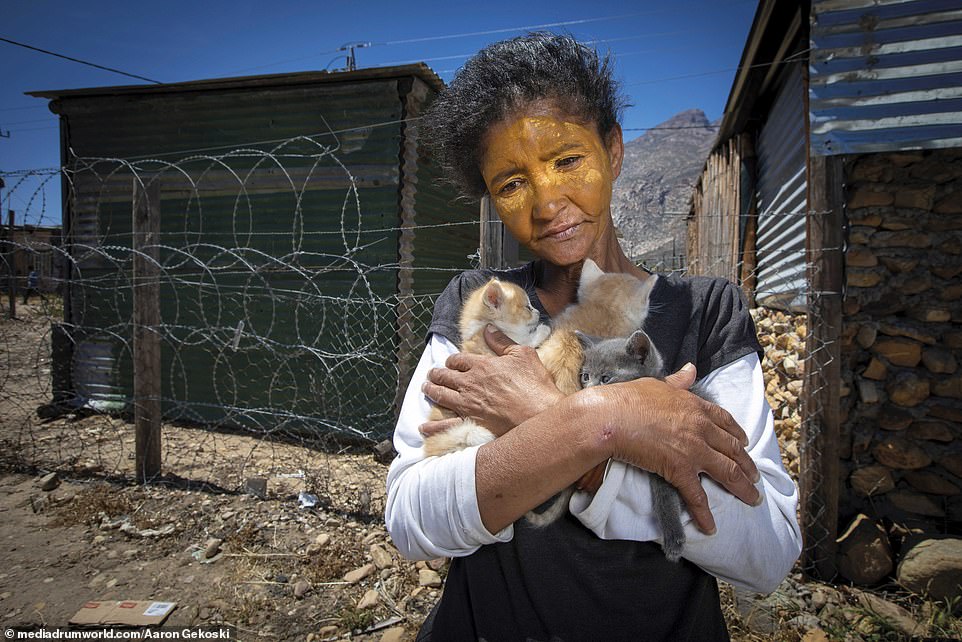 SOUTH AFRICA: A woman selling kittens to buy food in De Doorns. The woman, wearing yellow paint as sunscreen, has a cat who has just given birth 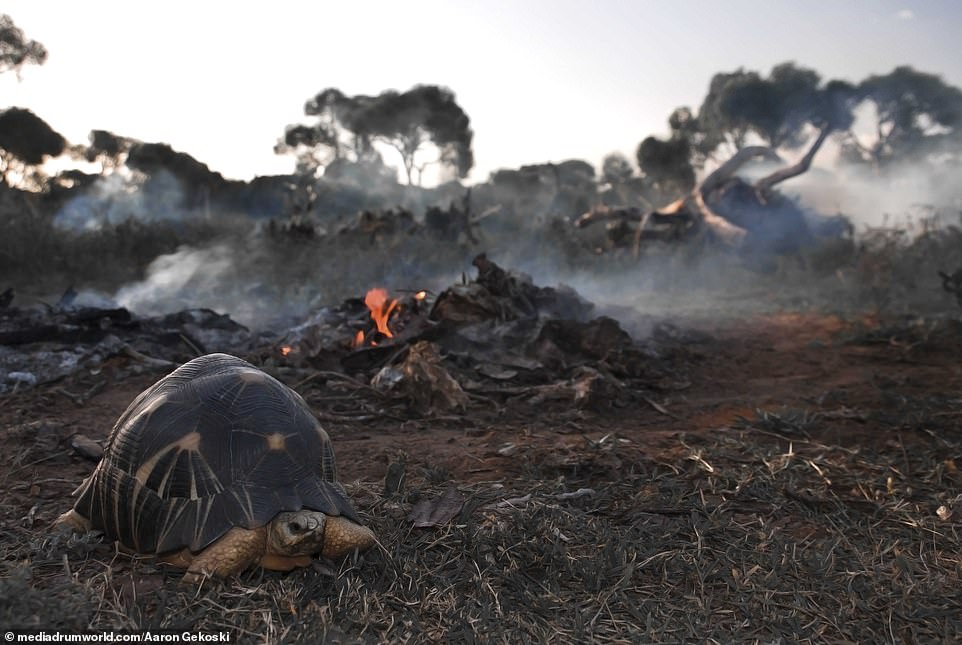 MADAGASCAR: A radiated tortoise on deforested land on the island where forests are being cleared for the charcoal and rice industries and for cattle pasture 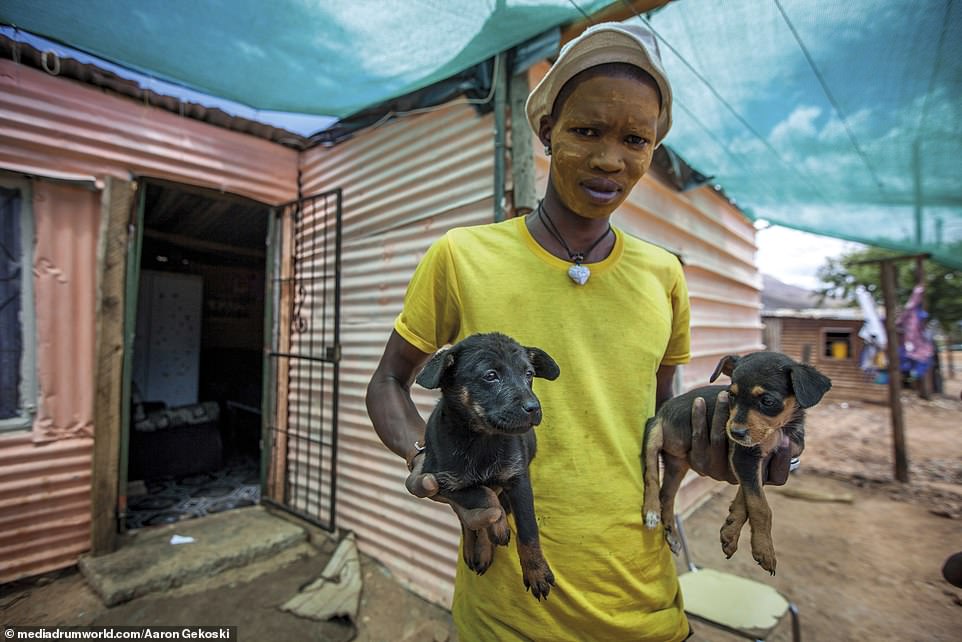 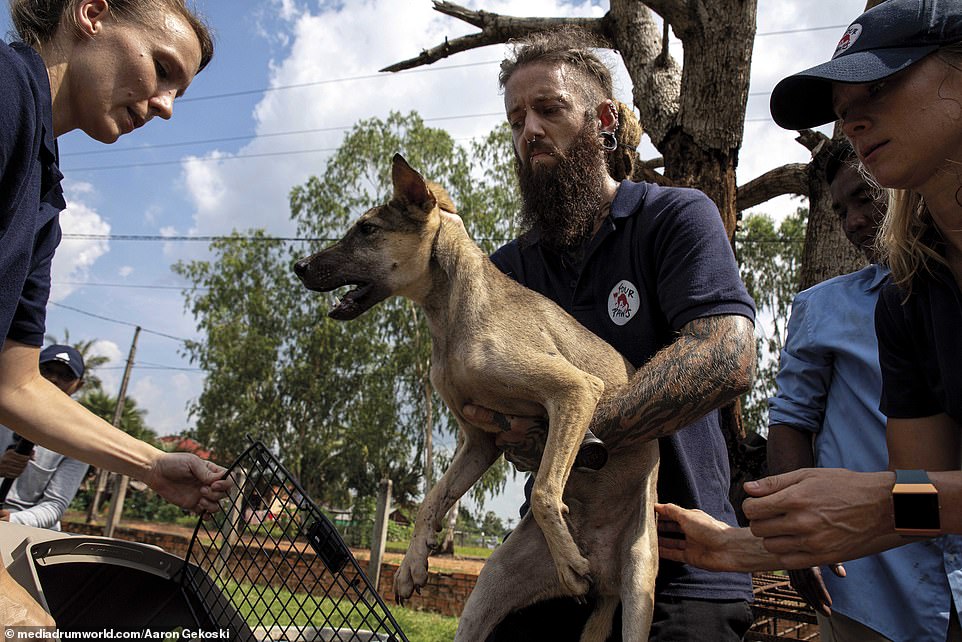 CAMBODIA: Animal rescuers from Four Paws save a dog from a dog meat trader in Phnom Penh. It was then taken to a clinic and put up for adoption