The historic win sees Sinn Fein become the first nationalist party to take control of the Assembly in its 101-year history. 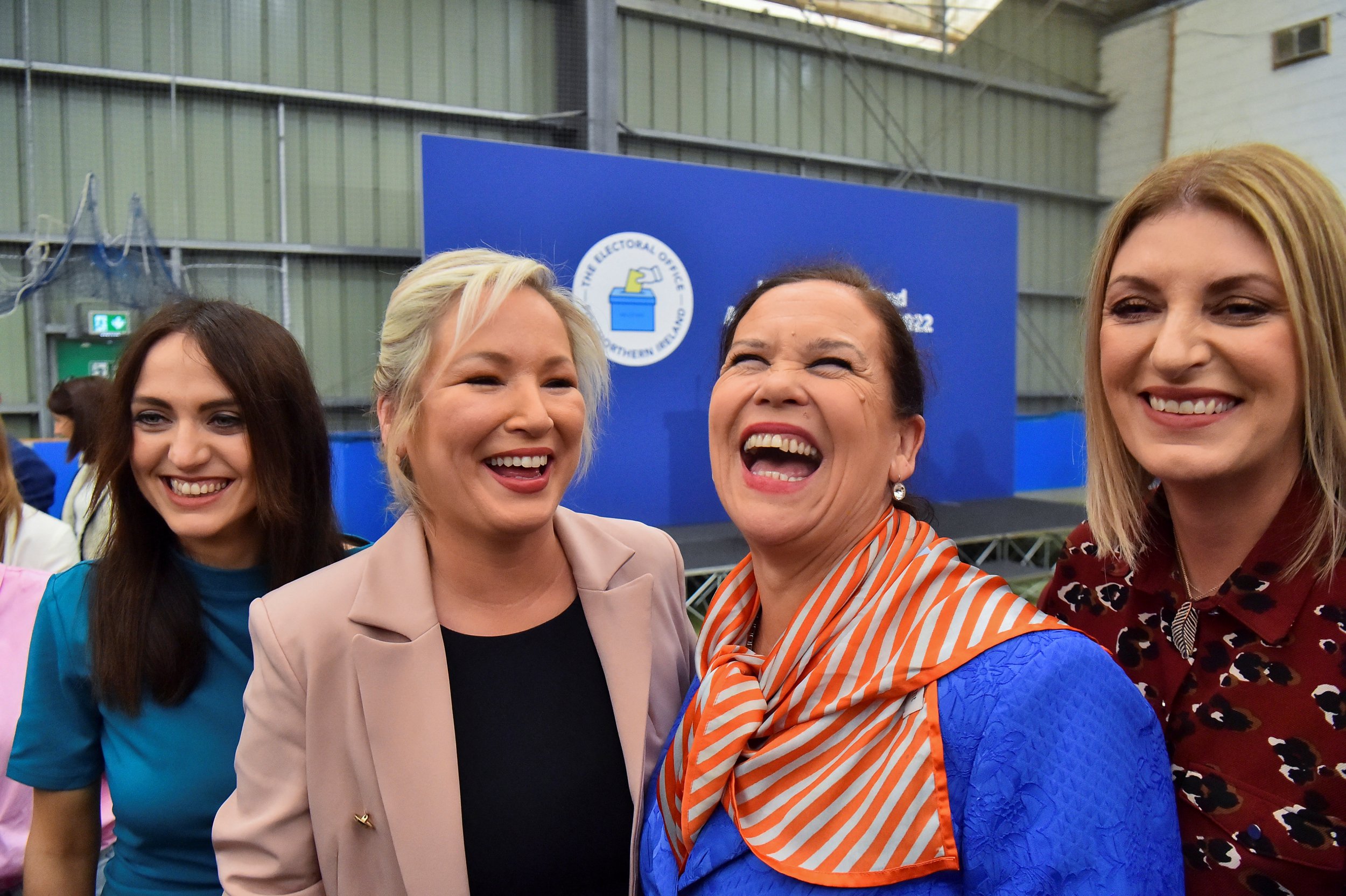 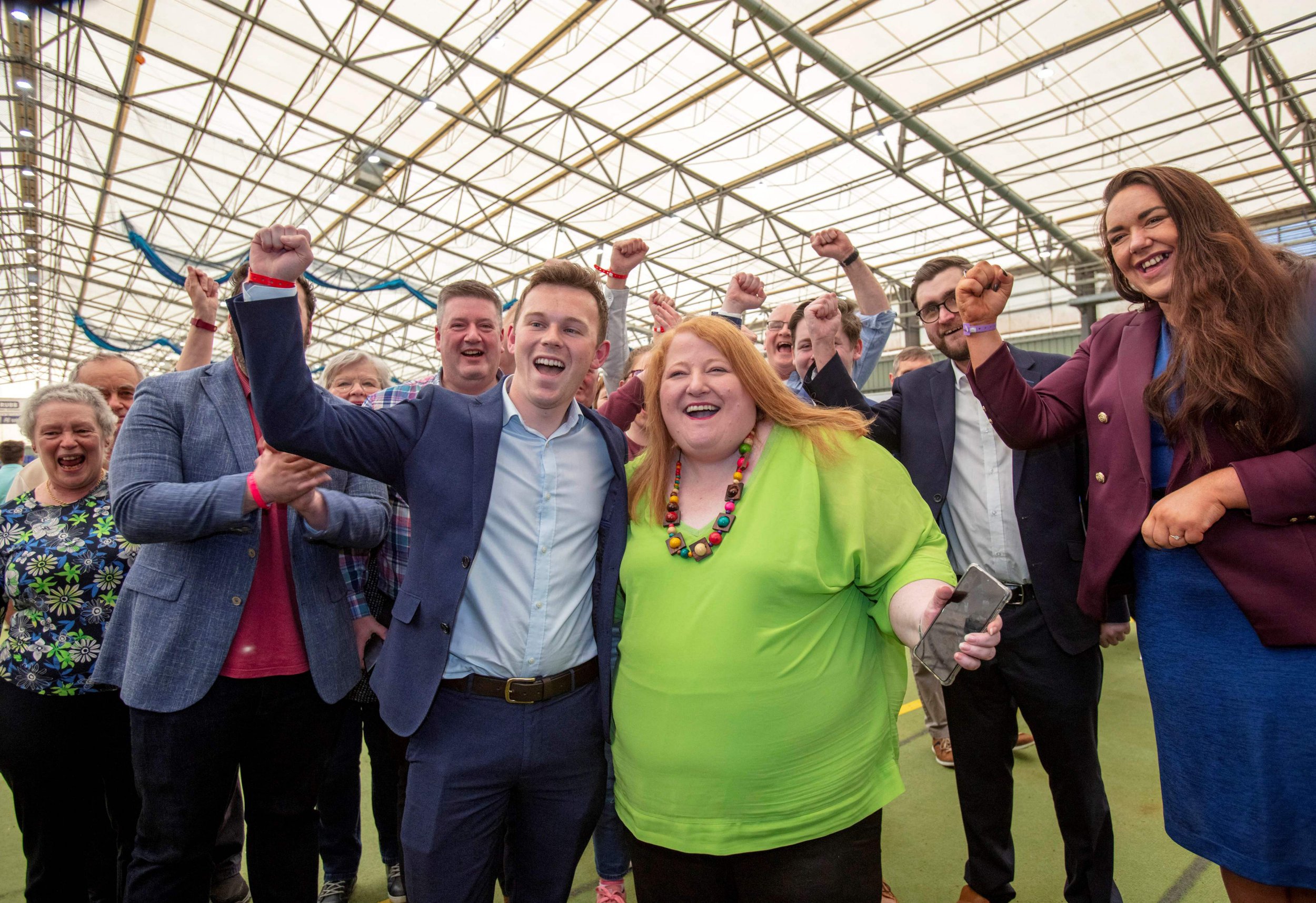 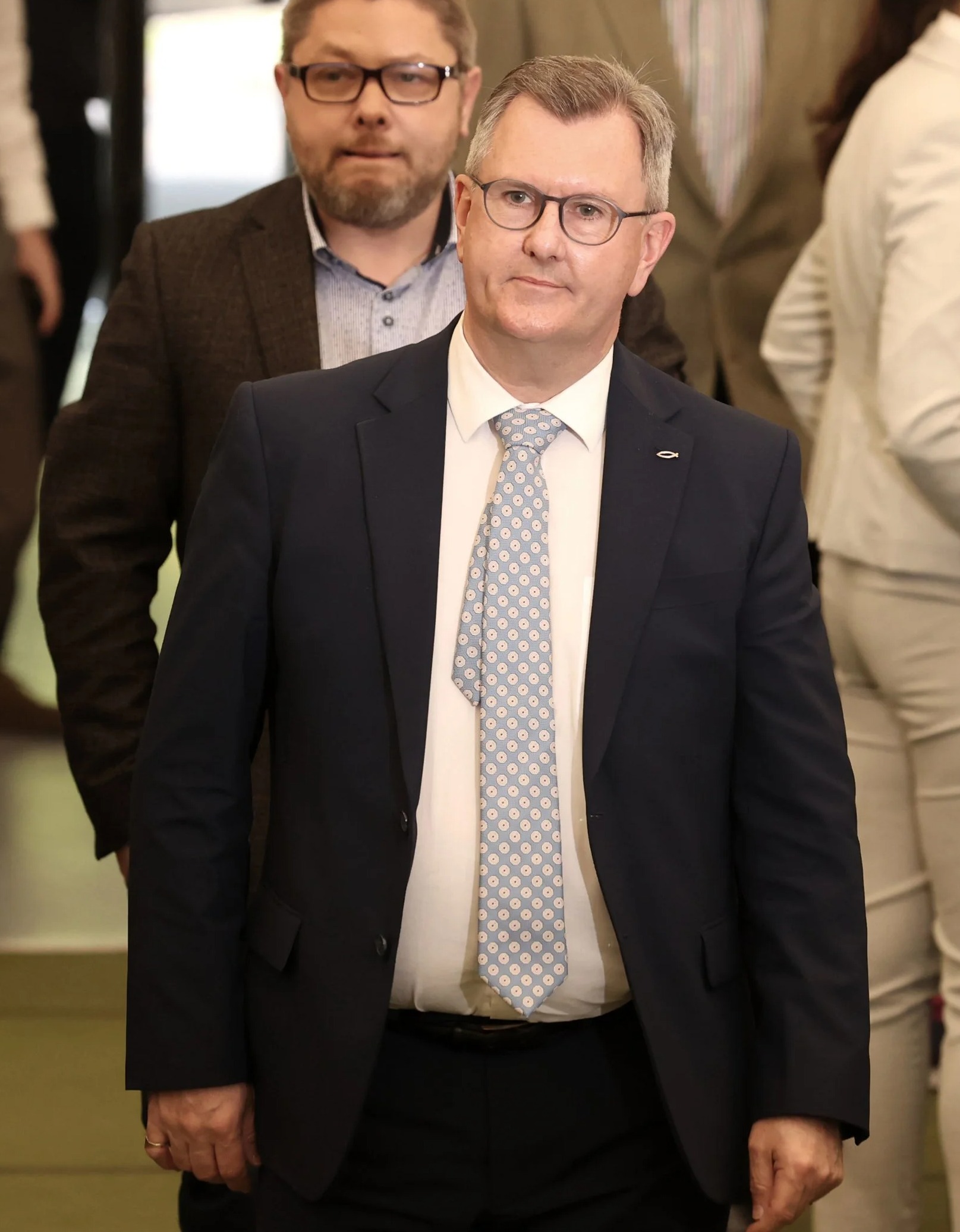 The election result has made it the largest party at Stormont for the first time.

As counting concluded in the early hours of Sunday morning, the final results confirmed what had long been likely, that the Republican party would force the DUP into second place.

The final seat of 90 was claimed by the DUP's Gary Middleton in Foyle after a marathon count which ended after 1am.

Sinn Fein has won 27 seats while the DUP has 25, the Alliance Party 17, the Ulster Unionists (UUP) nine and the SDLP eight, with four others elected.

The Alliance Party has also enjoyed a successful election and will emerge as the third biggest party at Stormont, while the UUP and SDLP have had disappointing results.

Ulster Unionist leader Doug Beattie was elected in Upper Bann despite earlier fears he could lose his seat.

However there was upset for the SDLP when deputy leader and outgoing Stormont infrastructure minister Nichola Mallon lost her seat in North Belfast.

In her declaration speech in Magherafelt after topping the poll in Mid Ulster, Michelle O'Neill said: "Today represents a very significant moment of change.

"Irrespective of religious, political or social backgrounds my commitment is to make politics work.

She said: "We look forward to an Executive being established, I look forward to Michelle O'Neill being nominated as first minister and to have politics that delivers for people.

"We would appeal to everybody to take stock, take breaths and really assess the huge responsibility that all of us carry.

"Collectively we have an obligation to get government up and running."

The DUP collapsed Northern Ireland's powersharing Executive earlier this year as part of its protest against the Northern Ireland Protocol, and has vowed not to re-enter government until their concerns are met.

Alliance Party leader Naomi Long has said nothing can be delivered without government in Northern Ireland after her cross-community party's election success.

Speaking at the Jordanstown count centre on Saturday after party candidate Patricia O'Lynn had won the final seat in North Antrim from DUP veteran Mervyn Storey, Mrs Long said she was excited about what her party could achieve at Stormont.

She said: "We went to the electorate based on a record of strong delivery in the last two-and-a-half years.

"We need to get in there (Stormont) on Monday because without government we can't deliver anything in Northern Ireland.

"I think given all the challenges that we face, if we squander this opportunity people will not forgive us, so we need to get in there."

The DUP, led by Sir Jeffrey Donaldson, will comfortably retain its position as the largest unionist party despite a drop in its overall share of the vote.

Speaking at the count at the Titanic Exhibition Centre, Sir Jeffrey said unionism "has held its ground".

He said: "The unionist vote remains strong, we are the largest designation in the Assembly, I think there is a lot of spin around results and I'm very pleased with how the DUP has done in our constituencies.

"We've held a remarkable number of seats where people were predicting all kinds of negative things, so we have strong foundations, we continue to build on them."

Asked whether Northern Ireland will have devolved government in 2022, Sir Jeffrey said: "Let's cross all the bridges when we get to them."

He also said he will make it clear next week whether he will return to Stormont or remain at Westminster.

He told the BBC: "The party officers will sit down, we will consider what we need to do now to get the action that is required from the Government, I will be making my decision clear on all of that early next week."

Sir Jeffrey was elected on the first count in Lagan Valley.

UUP leader Mr Beattie said voters had flocked to Alliance because they had been "turned off by angry, negative unionism".

He said: "I am from Upper Bann, I have had to make unpopular decisions in the direction of the party as party leader and that may well have had an effect on me, but these are the sort of things you go through all the time when you're thinking about an election.

"People are going to the likes of the Alliance Party in droves because they're being turned off by that angry, negative unionism."

Some 239 candidates stood across 18 constituencies.

Five Assembly seats are up for grabs in each of the 18 constituencies.

Reacting to the results, Taoiseach Micheal Martin said: "It is now incumbent on all political parties and elected representatives to deliver on their mandate, through the nomination of a first and deputy first minister and the formation of a new Executive to serve the interests of all of the people of Northern Ireland.

"Powersharing and principles of partnership, equality and mutual respect are at the heart of the Good Friday Agreement, through which peace has been secured and progress achieved for almost 25 years.

"A new powersharing Executive is vital for progress and prosperity for all in Northern Ireland.

"As a co-guarantor of the Good Friday Agreement, the Government will continue to work in partnership with the British Government and engage with the leaders of the political parties in Northern Ireland to seek and support the effective operation of all of the political institutions of the agreement."

This sentiment was echoed by Secretary of State Brandon Lewis, who urged the parties to form an Executive as soon as possible.

In a statement, he said: "The people of Northern Ireland deserve a stable and accountable local government that delivers on the issues that matter most to them.

"The electorate delivered a number of messages on Thursday.

"They were clear that they want a fully functioning devolved government in Northern Ireland, they want the issues around the protocol addressed, and that they want politics to work better."

FORMER Taoiseach Bertie Ahern said the people of Northern Ireland will vote against a united Ireland “if they don’t see the facts”.

The former Fianna Fail leader said it was a “big day” for Sinn Fein which “nobody predicted”.

And on Sinn Fein President Mary Lou McDonald’s claim that a border poll would happen in the next decade, Ahern told Newstalk’s Anton Savage Show: “In the election in the North, there was very little talk by nationalist parties about a border poll or about unity.

“The election was very much about what we know as the economic bread and butter issues of the day.

“The international media are perplexed with the idea of unification but on the ground it was not the issue.

He added: “Of course it’s continually on the agenda, it’s on the agenda since 1998. The provisions for having a border poll [are] there.

“Sinn Fein in recent years have moved their position to a position which I’ve been articulating for a long time, that you don’t have that poll until the work is done.

“I agree with them that some of the preparatory work is underway academically at the moment… but until you work out what does unity mean, what kind of a new Ireland is it, how would you bring it all together? There’s no point having an election until you do that.”

Ahern continued: “How is this going to be funded? How is the administration going to work? Where are the practical details? Where are the position papers? In practice none of this has been thought through.

“Even though we’ve been yapping about it for years, it hasn’t been done.

“Until that work is done, the idea of having a border poll – whether that takes two years, five years, I’m not going to say when – it has to be done.

“Otherwise you’re asking people to vote, and do you know what will happen when you do that, they’ll just vote no, if they don’t see the facts, and they won’t vote.”

Meanwhile, Scotland’s First Minister said Sinn Fein’s performance in has shown there are “big questions” around the future of the UK “as a political entity”.

Nicola Sturgeon said the result throws the future into doubt, with strong nationalist performances in Scotland, Wales and Northern Ireland this week.

Speaking today after her party increased its lead in Thursday’s council elections, Ms Sturgeon said: “If (Sinn Fein) emerge as the largest party today in Northern Ireland which looks very likely, that will be an extraordinary result and something that seemed impossible not that long ago.”

She added: “There’s no doubt there are big fundamental questions being asked of the UK as a political entity right now.

But, regardless of the changes she predicts, the First Minister said all of the nations will continue to co-operate regardless.

She said: “Scotland, England, Wales, Northern Ireland, the Republic of Ireland – we already sit around the British Irish Council table, and we will continue to do so, no matter whether Scotland is independent or not.

“The British Isles is not going away and will continue to co-operate but, for Scotland, co-operating on the basis of equality as an independent country will be much, much better than the situation just now.” 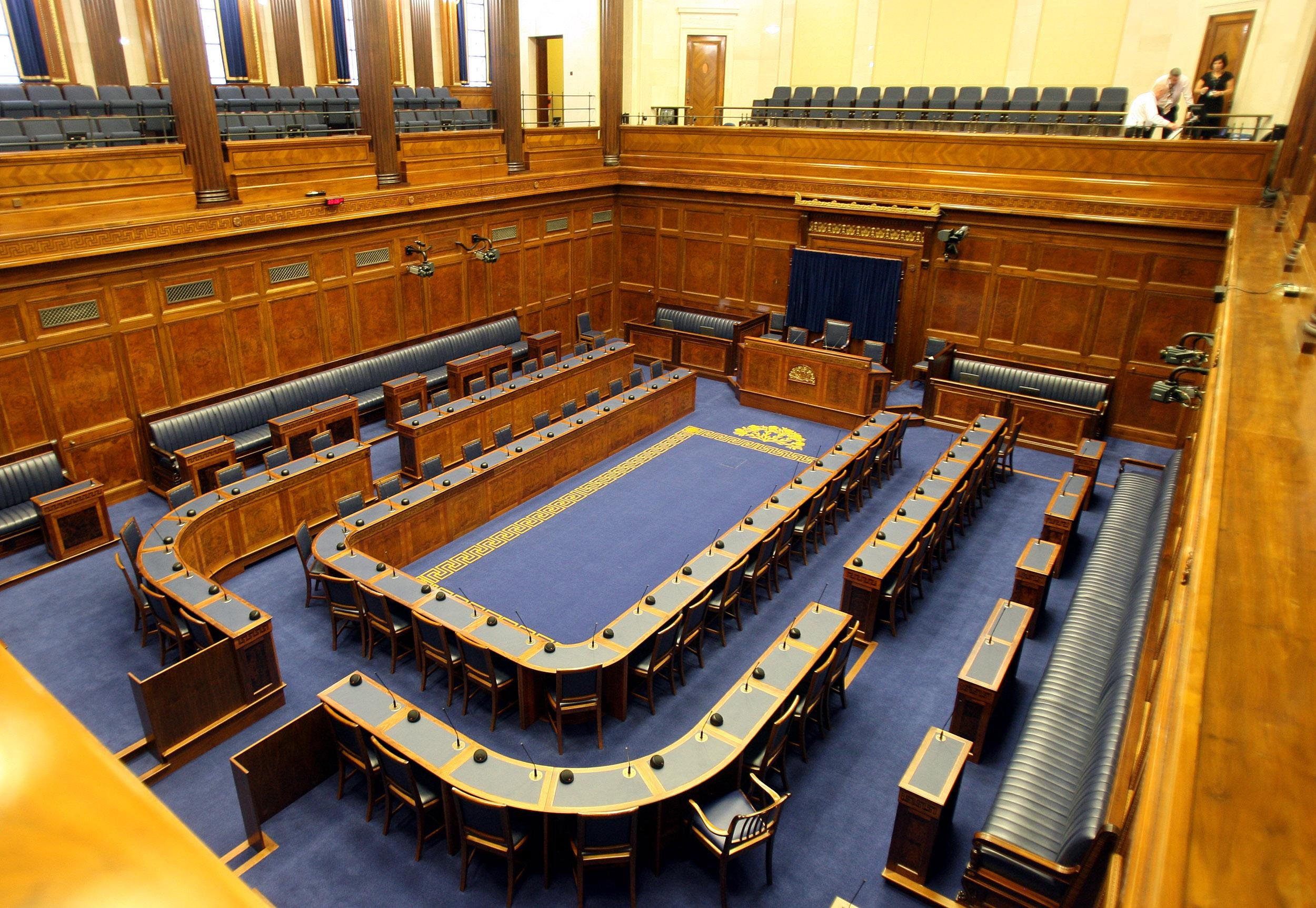