Sports Direct worker is found guilty of soliciting murder after trying to hire £1,000 hitman on the dark web to ‘sort out’ a female colleague who was ALSO having an affair with their married boss

A Sports Direct worker who tried to have her love rival killed faces a ‘lengthy’ jail sentence today for trying to hire a hitman to kill her work colleague when she discovered they were both having an affair with their boss.

Shop manager Whitney Franks posted an advert on the dark web offering £1,000 ‘or more’ in BitCoin for the hit on her rival in Milton Keynes.

Today she frowned as the 10 men and two women delivered their unanimous verdict in just four hours at Reading Crown Court this morning.

Judge Paul Dugdale told the 26-year-old as she stood in the dock: ‘You have been unanimously convicted of soliciting murder, it is a very serious offence. It is an offence for which I will have to pass a fairly lengthy sentence.’ The case has been adjourned until September.

Franks had been on trial throughout this week after messages she posted on the dark web offering to pay £1,000 in BitCoin to have 29-year-old Rutt Ruutna killed.

The jury heard that at the time Ms Ruutna was competing for the affection of Franks’ lover, Sports Direct general manager, James Prest. 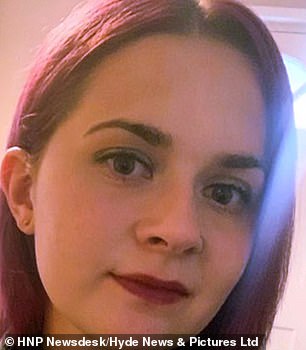 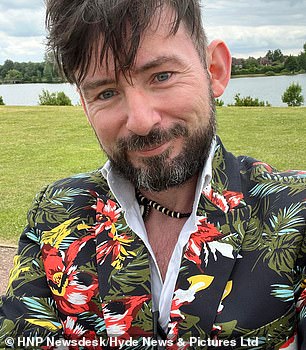 Whitney Franks (left) posted an ad on the dark web offering £1,000 ‘or more’ for someone to kill her colleague and romantic rival while the two of them were both involved in an affair with their store manager, a father of two named James Prest (right)

After just four hours of deliberation by the jury at Reading Crown Court, Franks was found guilty of soliciting the murder of Ms Ruutna, who was also having an affair with Mr Prest.

Both women knew that their shop manager had a long-term partner and two children, aside from the affairs he was having with them.

Prosecutor Andrew Copeland had told the jury how police were contacted by BBC investigative journalist Carl Miller, who came across the messages asking for a hitman to murder Ms Ruutna, while he was doing research on the dark web.

‘When people buy services on the dark web it is usually for drugs or weapons but here the website the journalist was looking at, dealt in death.

On the website was a message, including Rutt Ruutna’s address, in Milton Keynes, Facebook profile and description. It was posted by jealous Franks.

‘It read: “I’m looking for the murder of a woman. I have £1,000 and I am willing to pay more once I am paid. This woman has caused a lot of problems for myself and others. Please can you help sort this out”.’

The prosecutor explained how Franks had set up a cryptocurrency account, allowing her to make anonymous purchases online. She had bought £282.57 worth of bitcoin on August 20 2020, but three days later withdrew the funds.

Franks, represented by James McCrindell, denied the charge of soliciting murder between August 17 and September 1, 2020, but admitted to the jury that she had sent the messages in August 2020.

The jilted lover, of Milton Keynes, Bucks., insisted in court however that she never intended for anyone to get hurt.

She told the jury she was convinced the website in question – which she had uncovered through watching true crime documentaries and developing an interest while furloughed in lockdown – was a scam and wanted to prove to herself was a scam out of her own curiosity.

Following the jury’s verdict, Judge Dugdale adjourned the case for sentencing on September 9.

He told Franks: ‘You have been unanimously convicted of soliciting murder, it is a very serious offence.

‘It is an offence for which I will have to pass a fairly lengthy sentence. I will need to find out more about you, which will take time. There is no option other than to take away your bail.’ He remanded Franks, who was no a manager at a branch of Iceland, in custody until sentencing.