This is the incredible moment two majestic stags reared up on their hinds legs and began boxing in a fight for dominance at a country park.

Cara, 17, who has worked at the park for two years, said she was feeding the red deer when a male with one antler suddenly towered up on its hind legs. 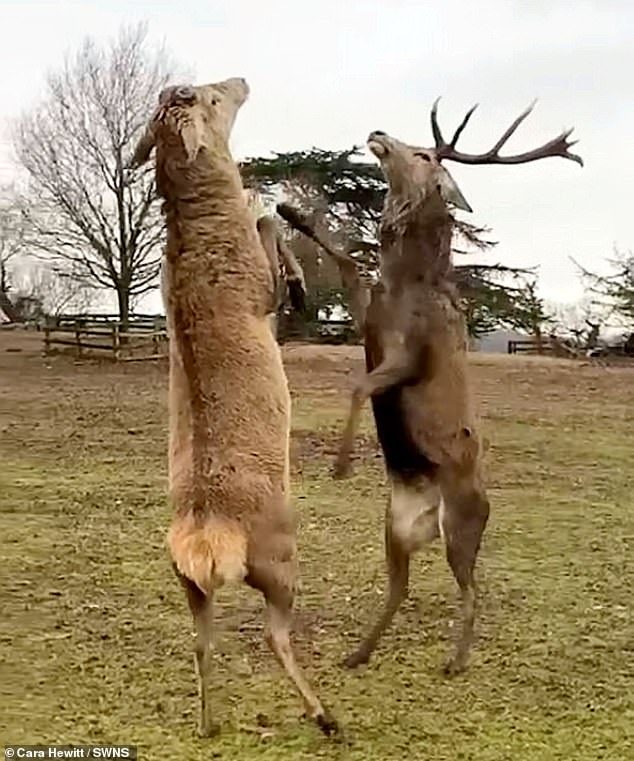 A large stag with one antler, right, approached the dominant stag on its hind legs at Bradgate Park in Leicestershire as the smaller animals were being fed by assistant ranger Cara Hewitt

The challenger can be seen jabbing at his rival, Dave, the alpha male of the 150-deer herd who quickly backs off in the fight, filmed last week.

The majestic animals, which stand 12ft tall on their back legs and weigh 35 stone, hissed and grunted at each other during the short second bout.

Deer stand on their hind legs to fight when they are losing their antlers, which fall off in spring and grow back before the rutting season in autumn.

In this case, Dave was at a disadvantage as he had already lost both antlers and needed to protect the new antler buds growing on his head, explained Cara.

The assistant ranger,  from Ravenstone, Leicestershire, said: ‘We were in the middle of feeding them and they try to show their dominance to get the most food.

‘The deer with one antler was boxing with lots of different deer and threw punches at this one for about ten seconds.

‘He was the first one to cast his antlers this year which is when they lose them to make room for new antlers to grow back in time for the rutting season.

‘It was quite surprising who won because the other one is our master stag who wins the rut and gets the most hinds, the female deer.

‘He’s our oldest stag at 14 years old called Dave and the other is much younger. He doesn’t have a name. They both stand over 12ft-tall and are absolutely massive.

‘I was only two metres away but luckily I was in the vehicle when they stood up and started hissing and grunting at each other.

‘We always tell people to stay 30 metres away from them but we can go closer because we can tell when they are going to do something possibly dangerous. 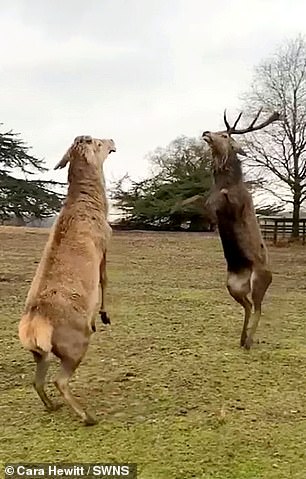 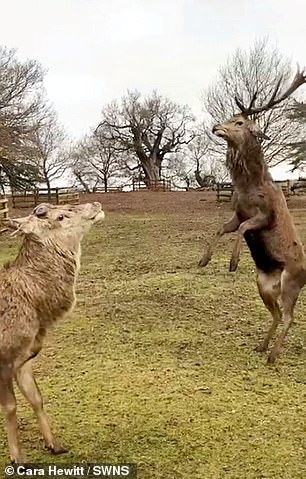 The one-antlered deer reared up onto its hind legs before jabbing the alpha male, left, who is called Dave

‘I was really chuffed to see it and get my phone out in time to get a good video. It is not that rare for them to do but it is rare to get to see.

‘We have got 150 deer in the park, more female than males, because otherwise there would be too much competition between them.

‘The loser Dave had to back off but while doing so he tried to make himself look bigger by staying on his hind legs.

‘He had no chance of winning without antlers and had to protect where they are growing through.’

Senior ranger Matthew Molesdale said the deer act in this way to show their dominance to other males and go on to their hind legs to protect freshly grown antlers.

He said: ‘When red deer stags start casting their antlers, they immediately start growing new ones, in fact, it’s the fastest growing bone in the animal kingdom.

‘They grow new antlers in time for rutting season in October.’