Can it be too cold to snow? Why lifting of air matters

As the temperature drops and precipitation looms during the winter, many wonder whether it can ever be too cold to snow. Here’s why snow can be considered a rare sight when the temperature dips below 0 Fahrenheit.

A storm rolling through parts of the Plains and Mississippi Valley will likely bring heavy snow, forecasters warned Sunday.

Winter storm warnings were in effect across a large swath of the country, from eastern New Mexico to central Mississippi.

On its website, the Weather Service said heavy snow could make travel treacherous from west-central Texas to northern Louisiana.

The weather system has also hit the southern Rockies. 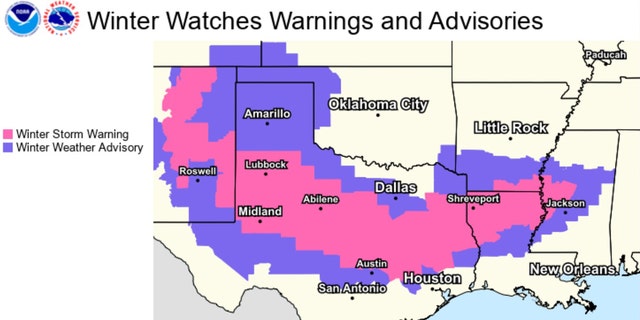 "Areas north of Denver have received the most snow this evening, with a few spots approaching 4"," Weather Service forecasters in Boulder tweeted early Sunday.

They also warned early morning travelers to beware of patchy dense fog and untreated roads that might be slick from overnight snowfall and freezing temperatures.

Other parts of the U.S. will also be experiencing significant snowfall.

"Rain is likely to spread across the Gulf coast and into the Southeast/Mid-Atlantic over the next couple of days," it said. "Snow is expected to continue over northern Texas today before spreading across an area extending into the Central Appalachians by Tuesday."

"Winter Storm Warnings and Winter Weather Advisories have been posted for much of south AR starting later today into Monday," tweeted the Weather Service office in Little Rock, Ark., on Sunday morning. "Snowfall amounts of 1 to 3 inches will be possible over far southern AR, with generally an inch or less farther to the north."