A historic country house that was once home to the man accused of adultery with Anne Boleyn is on the market for £10million.

Grade II Listed Hunton Court has a history dating back to the 13th century and was once home to Sir Thomas Wyatt, a Tudor politician and poet.

It was later owned by the Bannerman family for more than 150 years, including prime minister Sir Henry Campbell-Bannerman at the start of the 20th century.

The impressive three-storey property sits in 132 acres of parkland near Maidstone, Kent, and has lakes, a swimming pool and a tennis court. 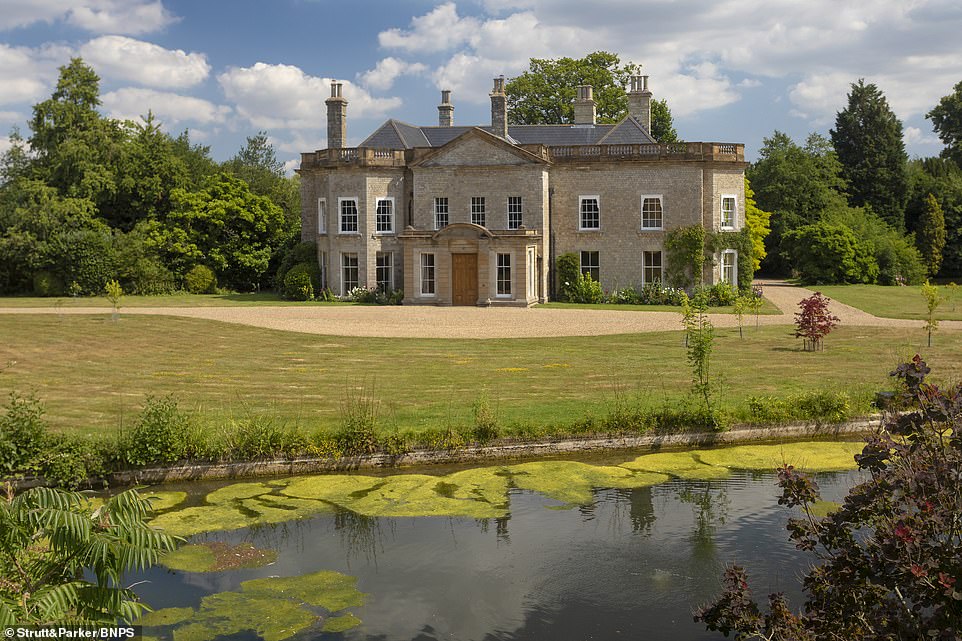 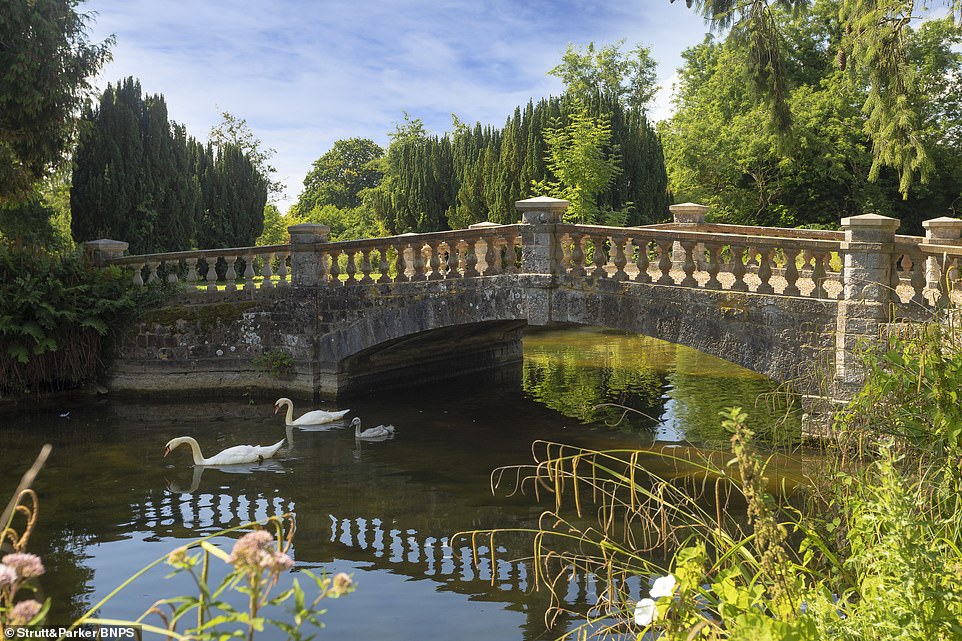 The property sits in 132 acres of parkland near Maidstone, Kent, and has lakes, a swimming pool and a tennis court

Once known as Court Lodge, the property was originally part of Canterbury’s Christ Church Priory until Henry VIII handed it to Sir Thomas Wyatt, his High Sheriff for Kent after the dissolution of the monasteries.

Sir Thomas, who is credited with writing the first sonnet in English, was a diplomat and skilled politician in the Tudor Court.

He was imprisoned in the Tower of London in 1536, accused of adultery with Anne Boleyn, but released later that year thanks to his family friendship with Thomas Cromwell.

Wyatt was charged again in 1541, this time with treason. He was granted a full pardon and returned to his duties as ambassador, thanks to the Queen Catherine Howard. 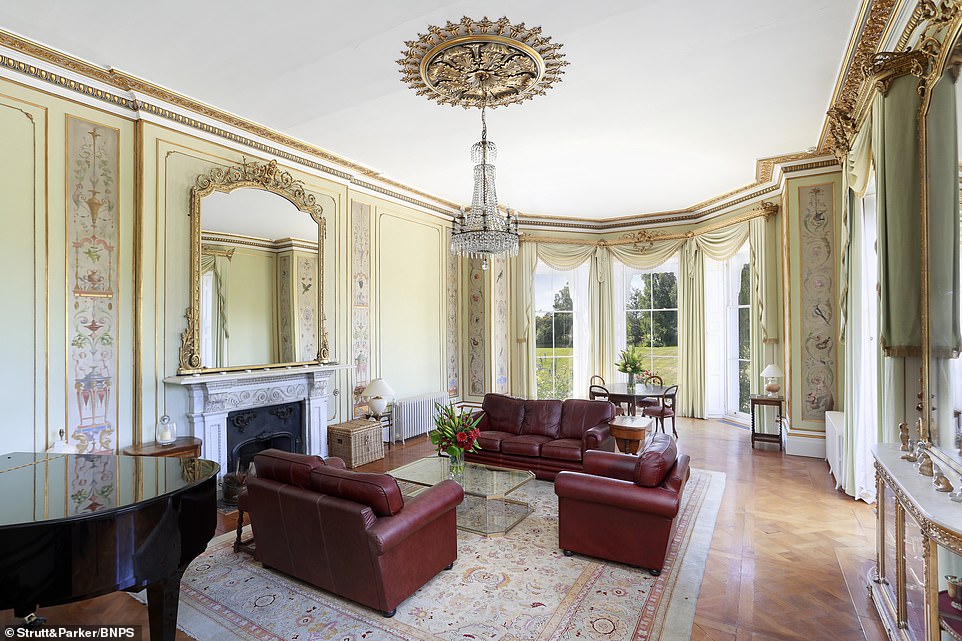 Once known as Court Lodge, the property was originally part of Canterbury’s Christ Church Priory. After the dissolution of the monasteries, it was handed to Sir Thomas Wyatt, High Sheriff for Kent, by Henry VIII 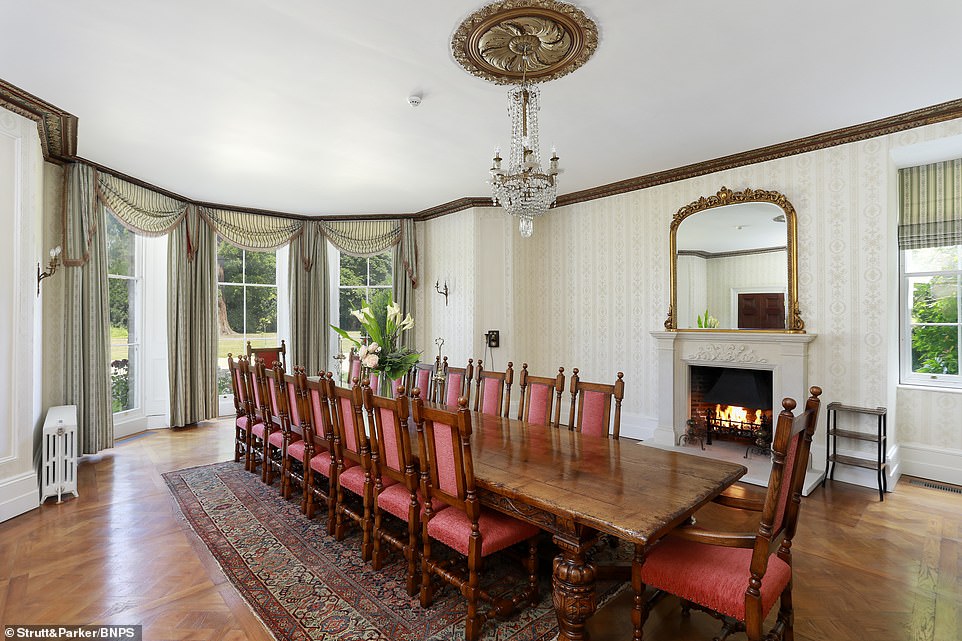 Towards the north of the house, an 18-seat dining table sits in the dining hall. The room opens into a reception hall and hallway 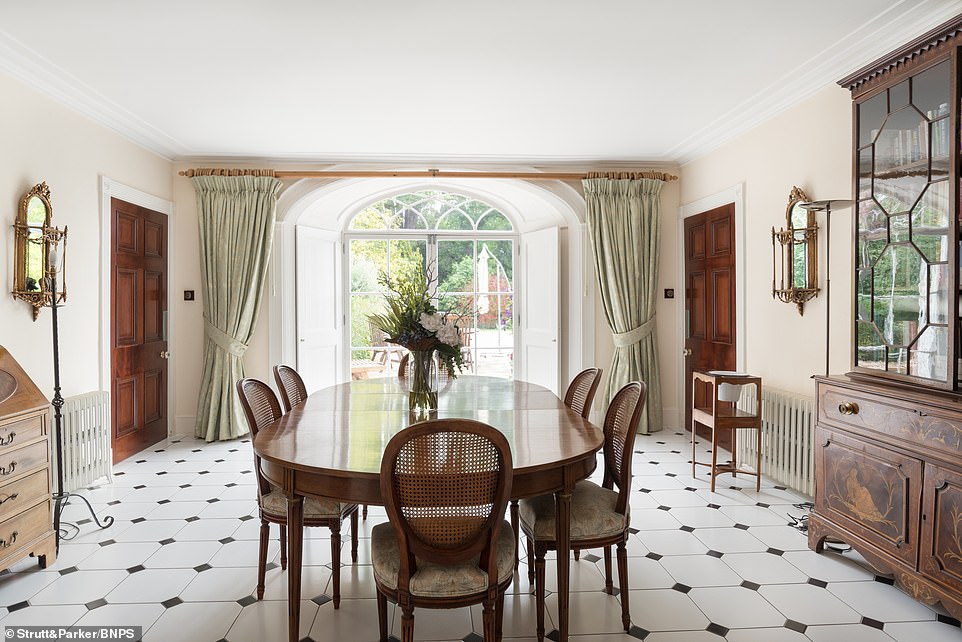 The garden room has double doors that opens out onto a patio, and a traditional-style black and white tiled floor 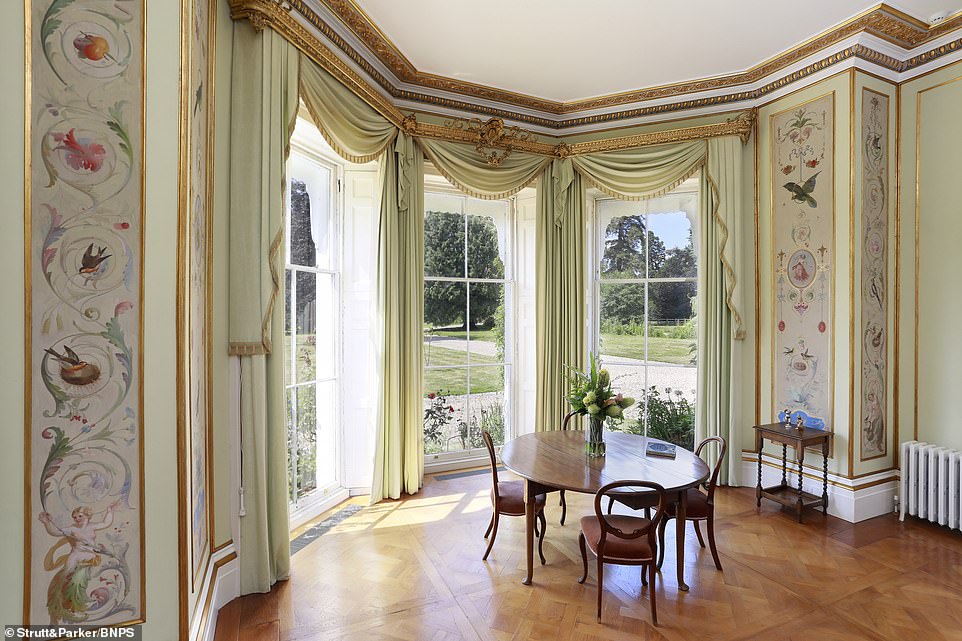 The drawing room is painted in a light green and decorated with panels of flowers, birds and women in pastel shades 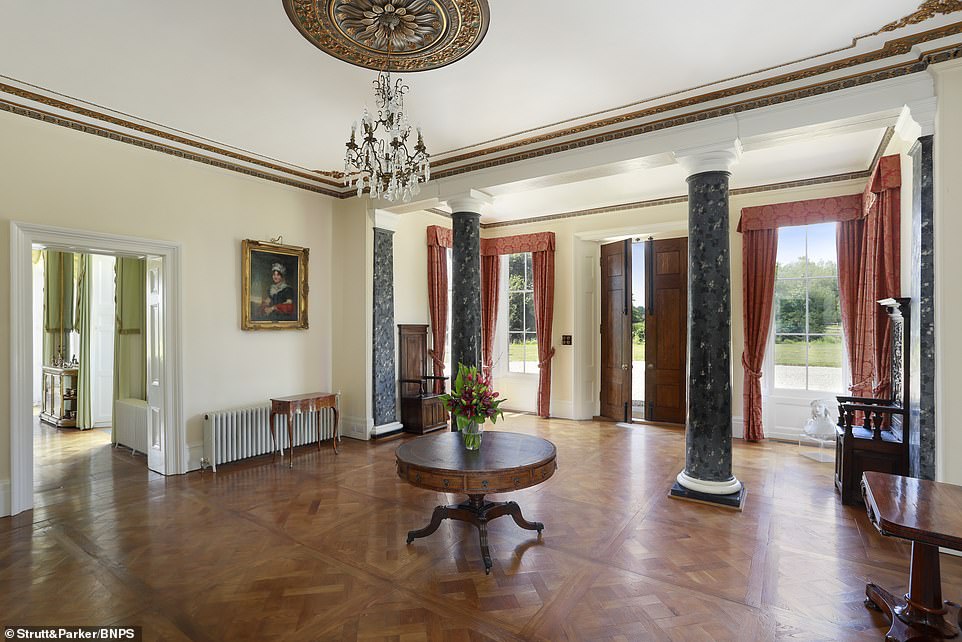 The reception hall connects to the drawing room and dining hall, with large windows overlooking the expansive gardens

His son Thomas Wyatt the Younger was not so gifted a diplomat. He led a rebellion against Mary Tudor, which was thwarted and he was executed in 1554.

Sir Henry Bannerman owned the estate from 1850 and passed it to his nephew Henry Campbell after his death, provided he changed his name to Bannerman.

Henry Campbell-Bannerman served as Prime Minister from 1905 to 1908.

The Bannerman family continued to own Hunton Court until the current owners bought it in 2008.

The house has over 14,000 sq ft of accommodation with a reception hall, dining hall, drawing room, morning room, garden room, old chapel, kitchen and breakfast room, bedroom and study on the ground floor. 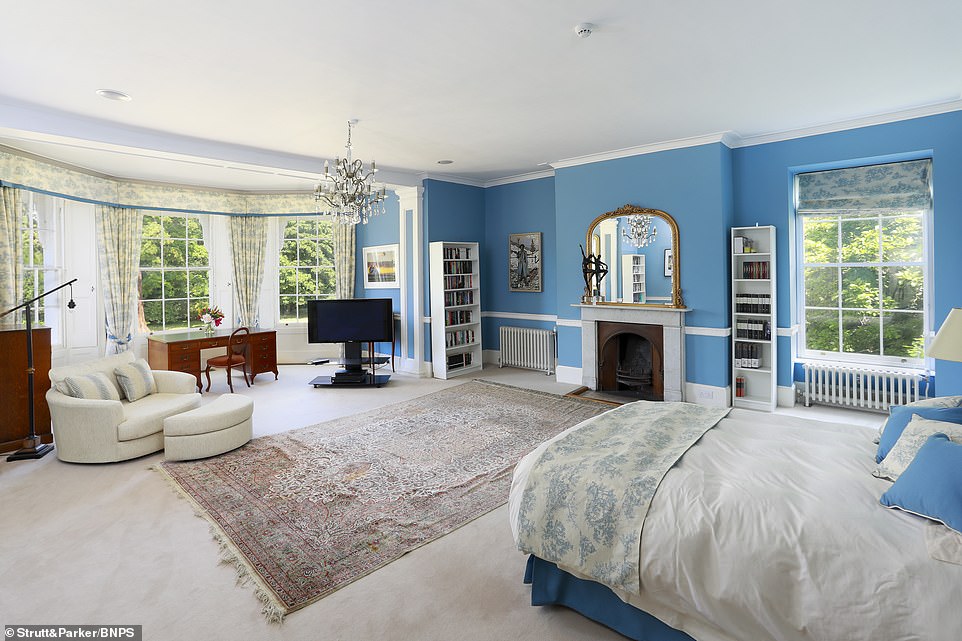 The eight-bedroom property spans more than 14,000 sq ft of accommodation. This first-floor bedroom has its own dressing room and en suite 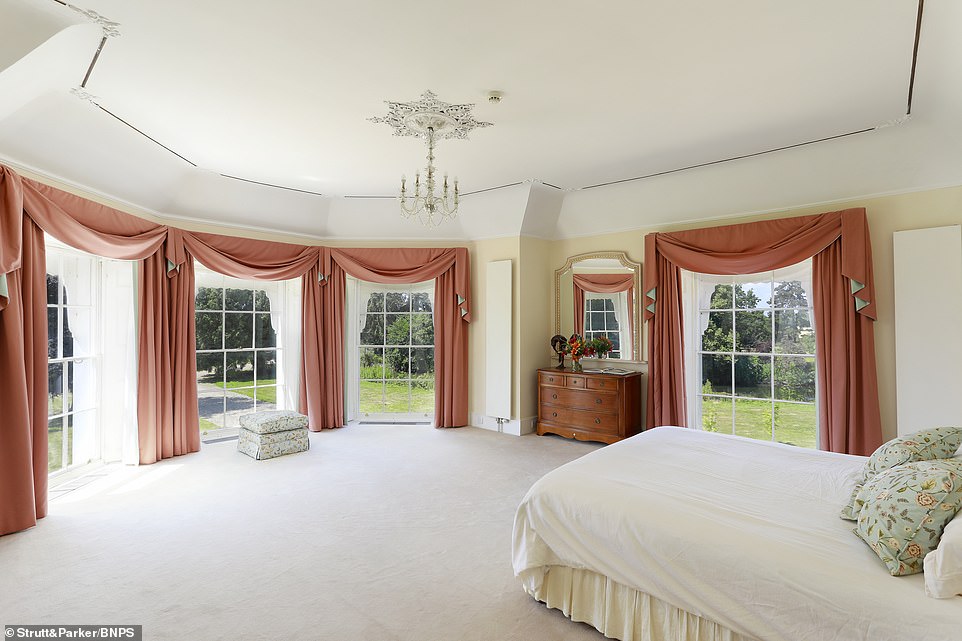 The expansive master bedroom also has the largest dressing room in the property and faces the south-west, taking in the evening sunshine 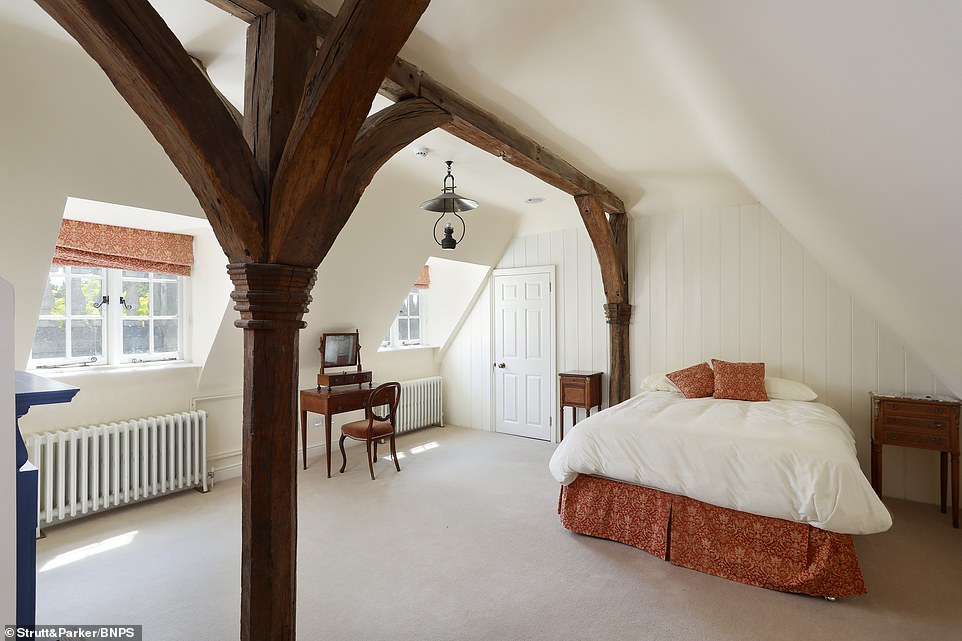 A third-floor bedroom has exposed wooden beams that date back to medieval times. It connects to a play room and is across the hall from a cinema room

There are another six bedrooms, five bathrooms and a kitchenette on the first floor.

Outside there is a heated swimming pool, a walled garden with a greenhouse, vegetable patch, orchard and refurbished tennis court, as well as woodland and lakes.

There is also a courtyard with further accommodation in the former coach house and stables and a workshop. 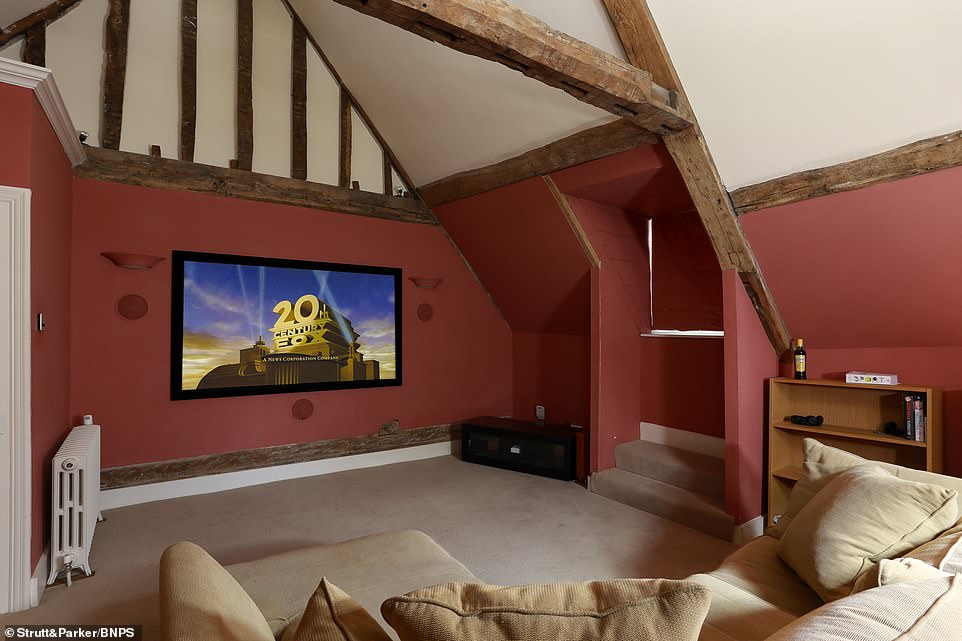 The top floor of the three-storey property has two bedrooms, bathroom, a cinema room, play room and recording studio 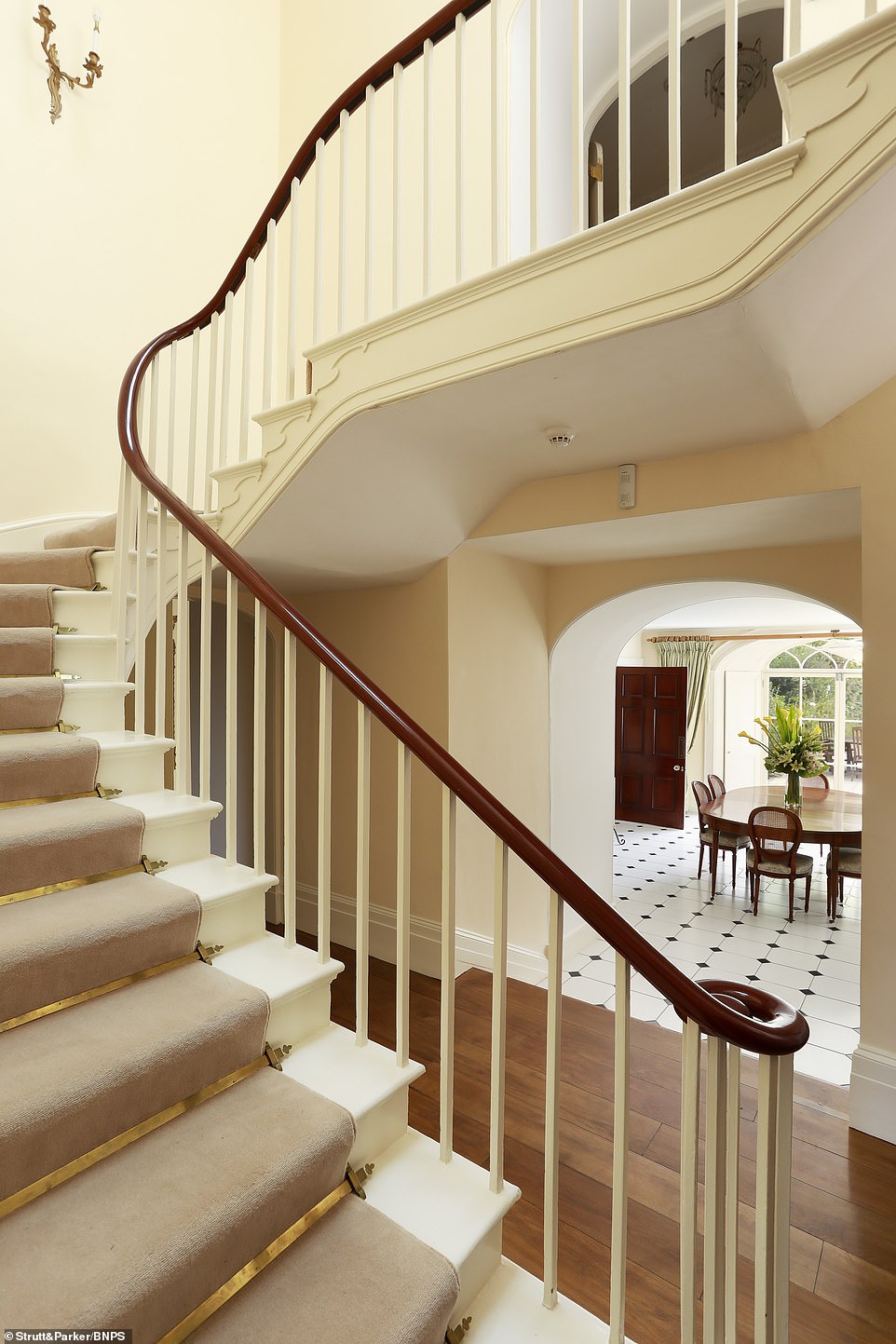 Simon Backhouse from Strutt & Parker, which is selling the property, said: ‘Hunton Court is one of Kent’s finest estates, it looks like it’s been plucked out of the Cotswolds and placed into the garden of England, with its parkland setting creating a quiet oasis to enjoy.

‘The house itself is grand in stature, but its farmhouse roots mean that it proportions work incredibly well for everyday family life.

‘The house sits within the estate of the rolling parkland, woodland and pasture, with those typical country house features such as the charming stone bridge and lakes, tennis court and swimming pool — the embodiment of English country estate living.’ 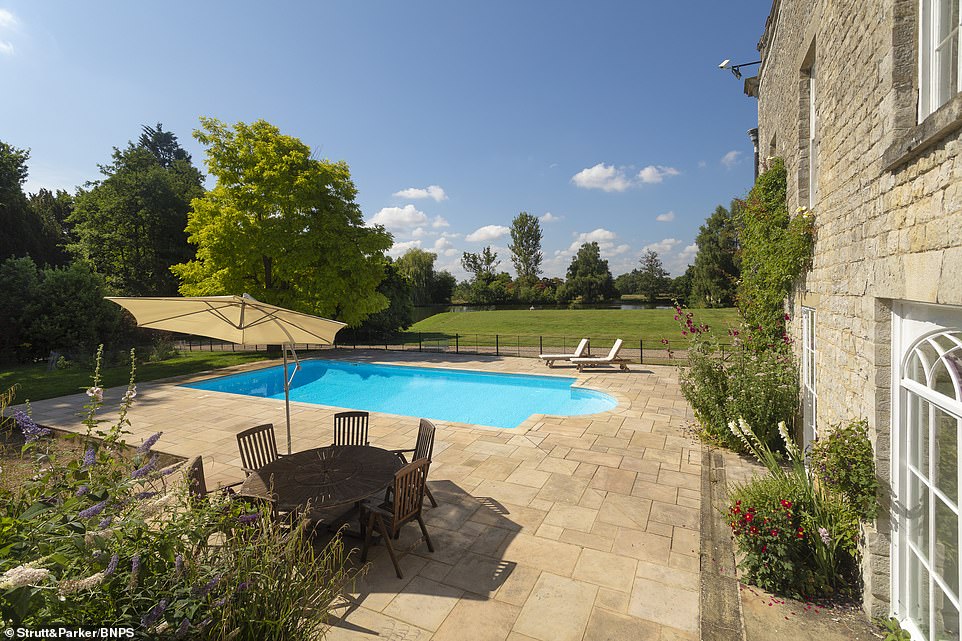 Outside there is a heated swimming pool, a walled garden with a greenhouse, vegetable patch, orchard and refurbished tennis court 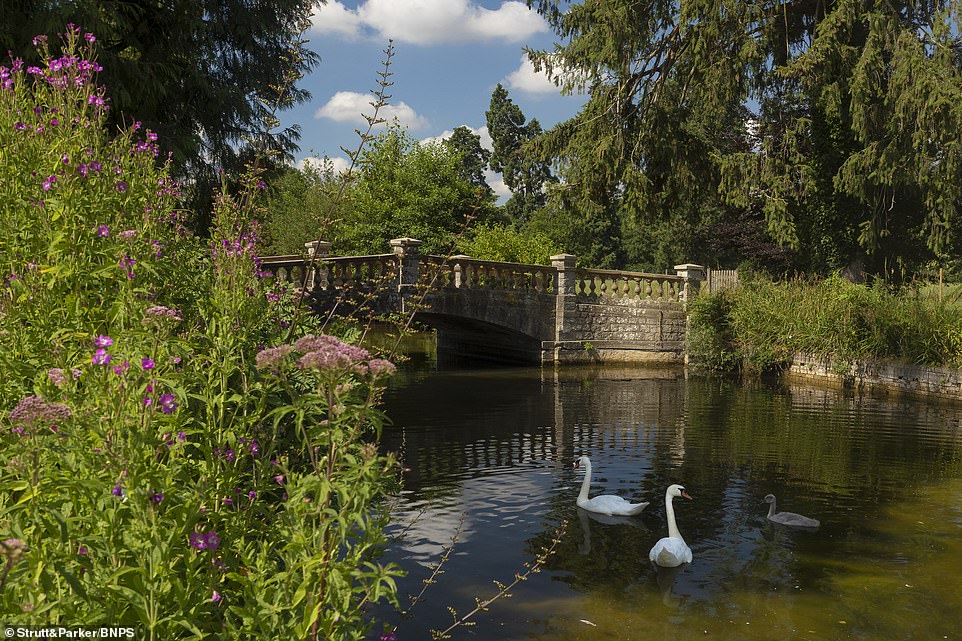 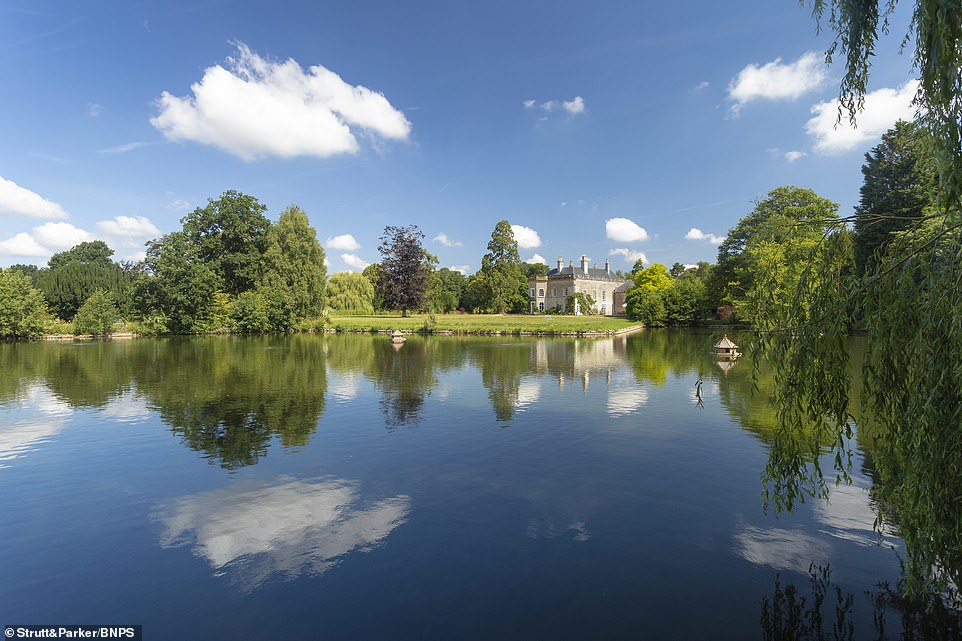 The well-established parkland does not fail to impress, providing beautiful views of the historic estate 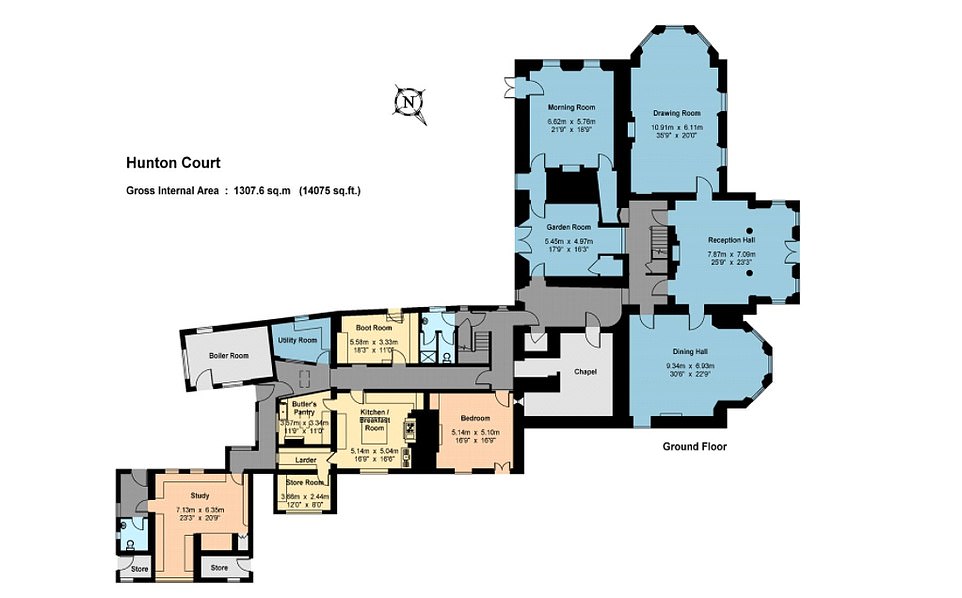 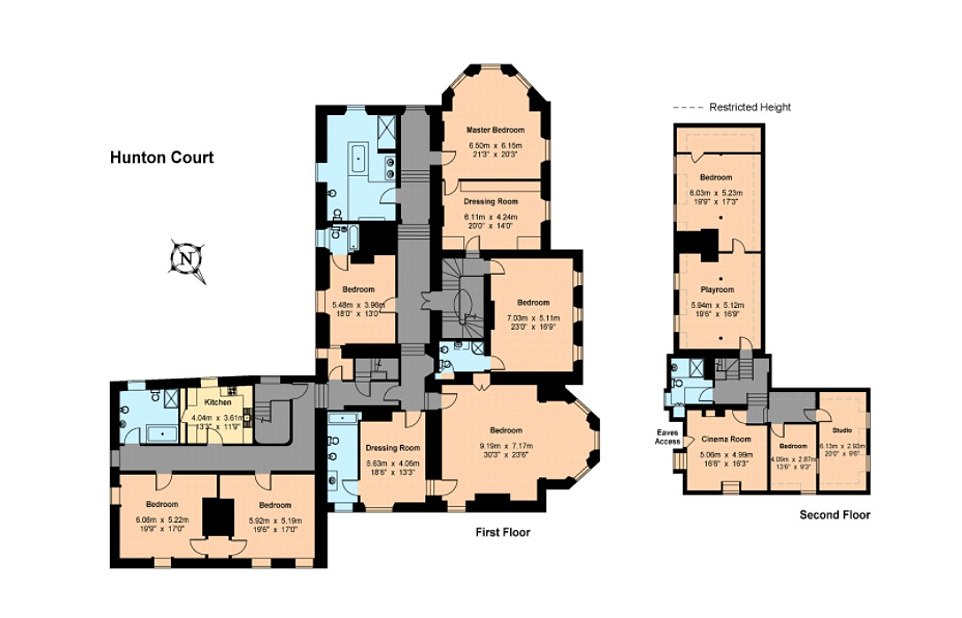 The first floor also has a kitchenette, along with two bathrooms and two en suites. The top floor has a further two bedrooms, recording studio and cinema room 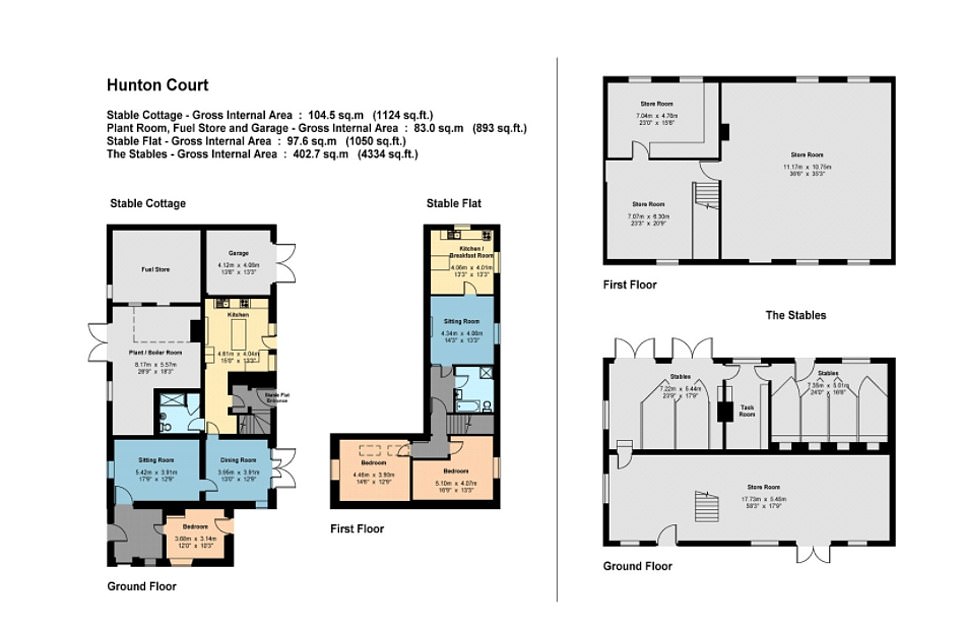 The property has a stable cottage, with a sitting room, dining room, kitchen and bedroom. Above is a two-bedroom flat with similar provisions. There are also stables with multiple store rooms 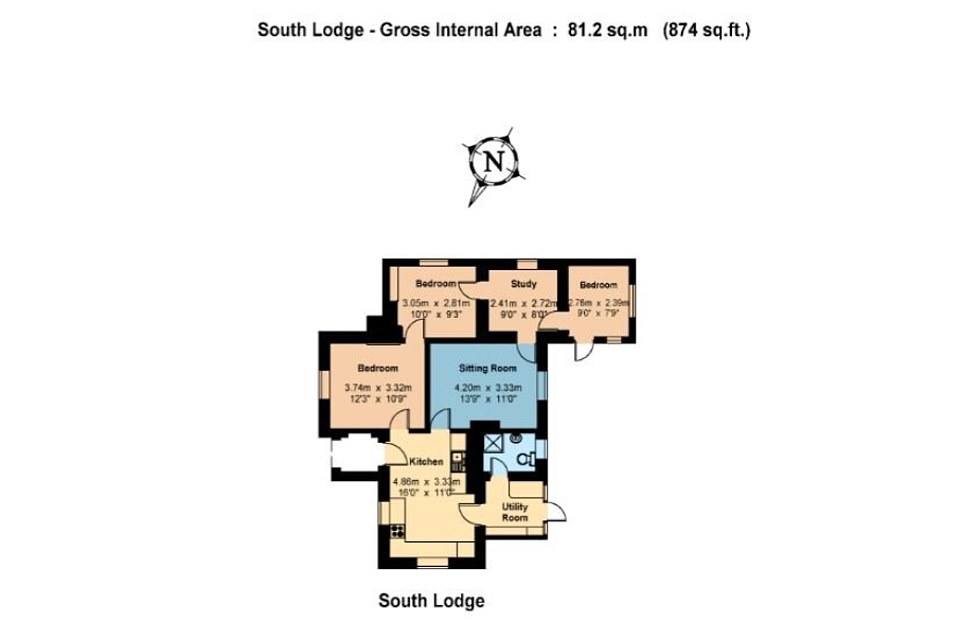 The South Lodge sits within the grounds and has three bedrooms, a kitchen, utility room, sitting room and study