Telcos will be forced to identify and block text message scams under new rules as the amount of money lost to these rackets hits a record high.

Text and phone call scams have exploded during the pandemic, with the latest data from the Australian Competition and Consumer Commission’s Scamwatch showing that Australians have reported a record $77.8 million in losses due to these rackets so far this year.

This is more than double the amount reported over the same period last year. 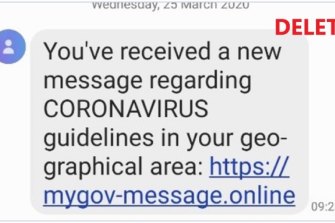 A fraudulent “myGov” text sent in the wake of the COVID-19 outbreak.

The number of phone and text scams reported to the watchdog has also increased from around 100,000 to more than 180,000.

“Criminals are very opportunistic,” he said. “They’ve reacted to the fact that we are just more connected to our devices than ever before.” 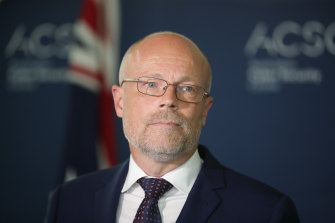 He said many recent scams had a COVID-theme: scammers know we are awaiting parcels and therefore more likely to click through text message links to confirm shipping details or view tracking information. Consumers have also fallen victim to vaccine scams that trick them into handing over personal and financial details.

One Australian lost nearly $5000 to the pervasive “Flubot” scam, which began circulating in early August and targets phone users with texts about a missed call. The scam prompts people to download an app which installs malware that can glean personal data and banking information.

Stolen and leaked personal details from websites are also fuelling the scams, according to Mr MacGibbon.

“The amount of information out there for criminals to abuse is huge,” he said. “Everyday Australians are brushing shoulders with criminals on a daily basis in a way that just never occurred before.”

He said telcos and the federal government need to take stronger action against scammers by fully utilising technology that blocks suspicious texts and calls.

Nigel Phair, director of UNSW’s Institute for Cyber Security, receives up to three scam calls and texts a day. He now often ignores calls unless the number is saved in his phone.

He believes the scams are proliferating because they are working.

“Criminals are amazingly rational people,” he said. “When they’re onto a winner, they’ll stick with it.”

The Communications Alliance, the industry body for the telecommunications sector, is developing a new industry code to identify, trace, block and disrupt SMS scams which would be enforced by the Australian Communications and Media Authority.

John Stanton, the alliance’s chief executive, said the new code had been delayed due to concerns the filtering of text messages could fall foul of Australia’s Telecommunications Interception Act, which dictates when telcos can examine the contents of messages and calls.

He said the alliance was trying to resolve this issue with the federal government and regulators, and the new code was expected to be completed by the end of the year.

A similar industry code was introduced in late 2020 to crack down on spam calls. The Australian Communications and Media Authority said telcos had blocked over 214 million scam calls in the seven months following the code coming into effect. 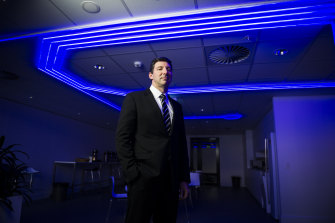 Stanton said no country had resolved the issue of spam calls and texts and one of the major barriers was the risk of blocking legitimate communication.

“The stronger the measures you take, the more risk there is of blocking legitimate calls,” he said. “If you start getting customers who find their calls are being blocked, hell hath no fury.”

Communications Minister Paul Fletcher said following a successful pilot, ‘phishing’ texts appearing to originate from government agencies such as the Australian Tax Office or Centrelink were now being blocked. The Minister said he had written to NBN Co, Australia Post and the banks urging them to apply the same new technology.

“Scammers will always look for new, soft targets, and we will continue to work to protect Australians from this type of criminal activity,” he said.

Telstra’s “Cleaner Pipes” program-which filters suspicious domain names and automatically blocks malware communication that tries to cross the network’s infrastructure-is stopping 13 million scam calls every month. This is up from 6.5 million calls at the start of the year.

The initiative is currently being improved to detect and block scam calls with numbers that appear to be from a known source. The phenomenon is called spoofing, and involves a scammer disguises the number they are calling from by changing the caller ID to a local number.