Rome: About 30,000 people will eventually join the circus that is the Glasgow climate summit but one act has already blown into town with more star power – and drama – than most. 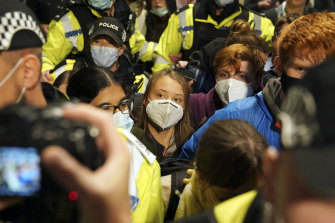 Greta Thunberg is mobbed after arriving in Glasgow for the COP26 summit.Credit:PA

One member of Thunberg’s entourage walked up to the waiting media and shouted, “get the f–k out of here!“, while another pleaded with the crowd to “give us some space”.

This might be wishful thinking. The 18-year-old Thunberg arrives at COP26 as one of the summit’s main attractions; a diminutive figure capable of attracting more attention than most of the 120 world leaders sitting at the main table.

In a rare interview with the BBC’s Andrew Marr, Thunberg said she had not been “not officially” invited to speak at the fortnight-long talks. “I think that many people might be scared that if they invite too many radical young people, then that might make them look bad,” she explained.

Asked whether she had thought about running for political office in Sweden, Thunberg laughed and replied, “no – at least not right now”.

“What’s needed now is a change in the narrative of how we see the climate crisis. We need to reach a critical mass of people demanding change and right now its more efficient to do that on the streets than inside.”

Thunberg also brushed aside growing fears that the summit will fail to achieve its core goal of limiting temperature rises to 1.5 degrees, insisting change was still within reach.

“It’s up to us if we want that to happen,” she said. “We can always prevent things from getting worse. It’s never too late do as much as we can.”

Thunberg, who rose to prominence in 2018 after protesting outside the Swedish Parliament building instead of attending school, has become the de facto leader of a growing movement of young environmental activists.

Stanley Johnson, the father of British Prime Minister and COP26 host Boris Johnson, last week told The Sydney Morning Herald and The Age that he thought Thunberg was “marvellous”.

“She has absolutely galvanised the world.”

Thunberg and other young climate warriors were on the mind of Prince Charles when the heir-to-the-throne issued a call to arms to G20 leaders in Rome.

“It is impossible not to hear the despairing voices of young people who see you, ladies and gentlemen, as the stewards of the planet, holding the viability of their future in your hands,” he said.

The Prince of Wales also told leaders including Australian Prime Minister Scott Morrison that the decisions they make “will dictate the health, happiness and economic prosperity of generations to come” and reminded them of their “overwhelming responsibility to generations yet unborn”.

“And as the enormity of the climate challenge dominates people’s conversations, from newsrooms to living rooms, and as the future of humanity and nature herself are at stake, it is surely time to set aside our differences and grasp this unique opportunity to launch a substantial green recovery by putting the global economy on a confident, sustainable trajectory and, thus, save our planet,” Prince Charles said. 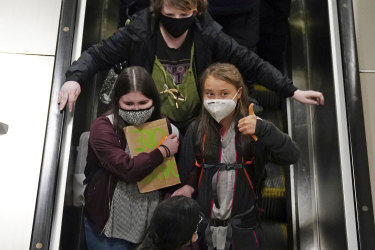 Thunberg has become the de facto leader of a growing movement of young environmental activists.Credit:PA

Thunberg is expected to lead a huge march in Glasgow next weekend and on Sunday backed climate demonstrators in Britain who have adopted disruptive tactics like gluing themselves to roads.

“To make clear, as long as no one gets hurt then I think sometimes you need to anger some people,” she said. “The school strike movement would never have become so big if there wasn’t friction if some people didn’t get pissed off.”

Get daily updates on the climate summit that will shape our future. Sign up to our COP26 newsletter here.