Temple Bar, a Moody Enclave for Martinis, Is Set to Reopen

The owners of Sona and Attaboy have teamed up to revive this retro jewel-box bar in NoHo.

Temple Bar, the clandestine bar on Lafayette Street that served up martinis, mood lighting and a downtown version of uptown glamour until it closed on New Year’s Eve in 2017, will reopen Thursday. And though the management may be new, it is decidedly loyal to the memory of the original.

Maneesh K. Goyal and David Rabin, who in March opened the Indian restaurant Sona with Priyanka Chopra Jonas, have joined with Michael McIlroy and Sam Ross, the team behind the cocktail destination Attaboy, to resurrect a bar they all often leaned against in the past. Temple Bar’s name and its Art Deco-ish green décor will remain the same, though the space has been thoroughly refurbished. Also remaining in place is the skeletal chameleon that was the bar’s logo and is still only clue that 332 Lafayette Street contains an elegant saloon.

“We would not have got it, I think, had we not been so enthusiastic about wanting to keep it Temple Bar and restoring it,” Mr. Rabin said.

He and Mr. Goyal discovered that the dormant space was available for lease in 2018 when they were shopping around for a space for Sona. The space is overseen by the executors of the estate of George Schwarz, the German-born physician who founded the bar in 1989.Mr. Schwarz — who also owned Elephant & Castle and NoHo Star (both now closed) — died in 2016. His estate also holds the trademark to the name Temple Bar. 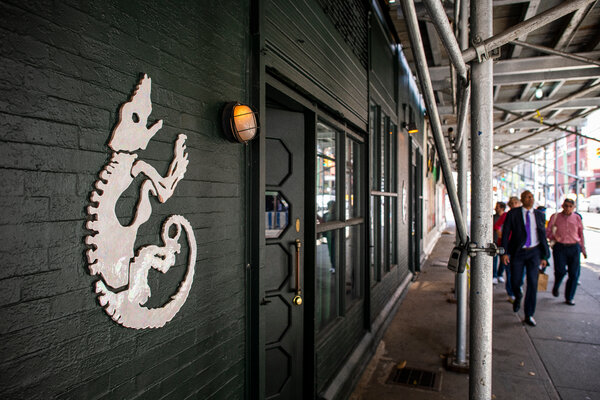 “They were pleasantly happy when we said the only way we can do this deal is if we can get the name,” Mr. Goyal said of the executors.

Mr. McIlroy and Mr. Ross were brought aboard soon afterward to overhaul the drinks menu. In its heyday, Temple Bar exemplified the martini craze of the 1990s, serving well-crafted, if birdbath-size cocktails alongside steak cubes and free popcorn. (Both food items will return, as well as other bar snacks.)

“It was still the only place where you could go and ask for a martini, an old-fashioned, a Negroni, and the bartenders knew what it was right away,” said Mr. McIlroy, who first started going to Temple Bar in the mid-aughts. “Even then, it was above a lot of other bars.”

“We both had some memorable nights here,” Mr. Ross said. “We probably couldn’t afford the martinis then.”

As the cocktail revival got into full swing later in that decade, Temple Bar fell behind drinking trends, and its retro glamour faded a bit. Still, its stylish atmosphere and unchanging ways bred a devoted clientele.

“It’s incredible the look in people’s faces when I tell them we’re working on Temple Bar,” said Mr. Rabin, who added, “There’s a love for this place.”

The drink list will be heavy on martini variations, Champagne and mezcal, but with playful touches. The house Negroni will be blue, the Campari stripped of its red hue and recolored. A number of the stirred cocktails on the menu can be ordered as “royales” — that is, topped with Champagne, for a surcharge.

The current frenzy for espresso martinis will be answered with the drink Sick as Espresso Martini, which is flavored with banana and vanilla. The cocktails, famously pricey even in the 1990s, will remain so. The sticker price is $21.

Samantha Casuga, formerly of the Dead Rabbit, will be the head bartender.

The partners’ intentions in reviving Temple Bar aren’t too far from what the bar meant to achieve when it first opened more than 30 years ago. “I like to call this nightlife for grown-ups,” Mr. Rabin said. “It should feel a little bit elevated, a little bit aspirational, but it shouldn’t feel like just going to a club somewhere.”